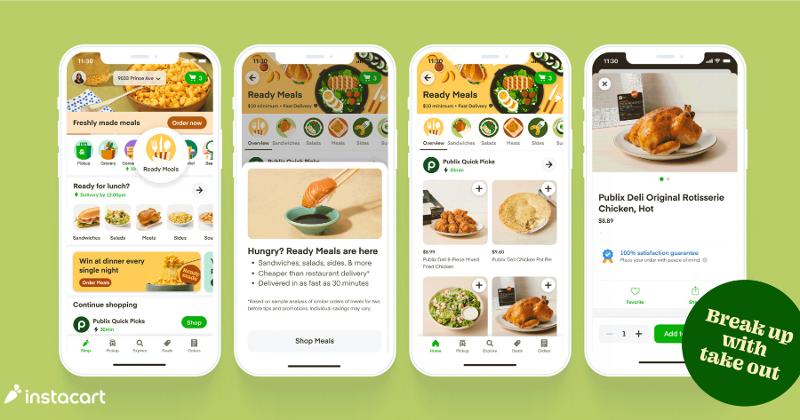 Instacart has conquered grocery delivery, and now it wants to compete with restaurants too.

The third-party grocery delivery giant this week announced its entry into the hot meals segment, framing its new Ready Meals service as a healthier and more affordable alternative to restaurants.

It even went a step further, urging customers to "break up with takeout" and order prepared foods from grocers instead.

In essence, Ready Meals is a new section in Instacart's app dedicated to prepared foods. Options in the Ready Meals Hub are things one might expect to find in the deli area of a grocery store: rotisserie chicken, soups, salads, sushi and sandwiches, for example.

Instacart already delivered those items alongside people's bread and milk, but the new hub sees it trying to compete directly with restaurants for mealtime dollars.

"With our new Ready Meals Hub, we're dishing up inspiring, more affordable and nutritious food alternatives to restaurant delivery that make it easier for consumers to break up with takeout this year," said Daniel Danker, Instacart VP and head of product, in a statement.

While this could take business away from restaurants, Instacart itself noted that the prepared food segment has been growing on its own: The U.S. chilled and deli food market is expected to become a $108 billion industry by 2026—an increase of more than 22%—according to analytics firm Research and Markets. And those items tend to be more profitable for grocers than produce and packaged goods, Instacart said. So a new platform promoting the category makes a lot of sense.

As of Thursday, customers in 35 states could use Ready Meals to order hundreds of prepared items from 4,100 stores including Publix, Giant and Kroger.

San Francisco-based Instacart is just the latest nonrestaurant company to come after the industry's market share. In July, big delivery service Gopuff launched its own ghost kitchens for hot meals, and convenience stores have been upping their foodservice game for years.