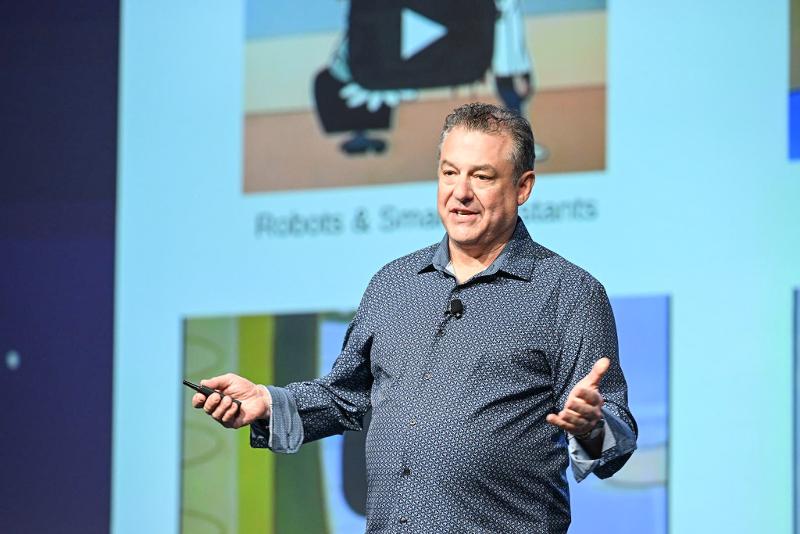 In the restaurant industry of 2050, guests will be eating food fashioned from algae and mushrooms, if not inhaling their meal in mist form, tech authority Rob Grimes predicted during a presentation at this year’s FSTEC conference, an event he founded several decades ago.

But Grimes’ projection of the amorous possibilities seemed to be what perked up an event whose sauciest topic until then had been alternative payment systems.

“Robots are being created that can have sex,” said Grimes, CEO of the International Food and Beverage Technology Association. “We’ll have more sex with robots than we do with our human partners.”

The possibility was one of the startling predictions Grimes offered in looking at how technology has evolved and where it’s heading.

His starting point was "The Jetsons," the futuristic cartoon series that first aired on American TV in 1962 and ’63. As he showed, many of the wildest space-age gizmos depicted in the show are familiar technology today, from smart watches to video conference systems.

“Before we think of the future, we need to consider the past,” said Grimes. 2050 is 28 years away, but in terms of technology, “the building blocks are already in place.”

He recalled a presentation he made in 1995 where he raised the possibility of concepts that existed only online—“virtual concepts,” as he called them back then. He recounted his caution to the audience back then that if a digital restaurant was going to work, “we had to be able to deliver food.”

“Look at where we are now,” Grimes said, referring the ample attention that was devoted during FSTEC to virtual brands.

Similarly, he continued, the advances prevalent in 2050 will likely be advanced generations of technology that’s already here, albeit in limited application. Hologram presentations are already used to provide virtual concerts and speeches. By 2050, that capability could be manifested in “surrogates,” or avatars that absorb the experience of going to a restaurant without a body actually being there.

The reverse will also be true: Restaurants will be delighting surrogates of actual humans who could be half a globe away.

“If we’re able to achieve the emotional part, we actually can get more people than we ever could today,” Grimes said.

“Holograms are the future. In fact they’re going to be part of life,” he said.

If a customer wanted to visit in the flesh, they may not need to put fork to fare. Grimes suggested that food may be inhale-able.

“People are doing extracts where people bring food in through smell,” he explained. “The concept of turning food into a mist exists today. What we’re not getting is the sensation of feeling full. But we can do something about that.”

If food can’t be turned into an aerosol, it might well be molded from edible substances that have the benefit of being sustainable—items like mushrooms and algae, according to Grimes. If that sounds implausible, he said, then consider how Burger King fans can already get a Whopper that looks, tastes and feels as it always did but is actually made from plant material.

“If we can use those ingredients and create food at home, why do we have to go out?” said Grimes.

Biden wants to end hunger and diet-related disease by 2030

Presto debuts on Nasdaq with hopes of automating restaurants

Get creative with breakfast sausage for a menu refresh