Joe Isidori is chef-owner of Arthur & Sons, an old-school Italian restaurant he opened in New York City this past summer. Isidori comes from a three-generation restaurant family and grew up in his father’s red sauce joint, standing on milk crates to clean shrimp and plate pasta when he was just five.

He went on to hone his skills in culinary school, head up Michelin-starred restaurants and create Black Tap Craft Burgers & Beers, which started as a 15-seat luncheonette and grew to an international chain specializing in great burgers and outrageous milkshakes. 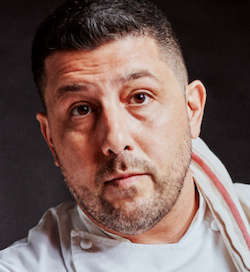 Black Tap was rooted in nostalgia, and that’s the same theme that runs through Arthur & Sons. The menu is filled with Italian-American classics like chicken parm, penne alla vodka and spumoni—all updated with artisan and housemade ingredients and new cooking styles. The cocktails are upgrades of old-school classics, too.

Listen as Isidori describes the twists and turns that led to Arthur and Sons and why this is the first time in his career that he feels like he’s being himself.