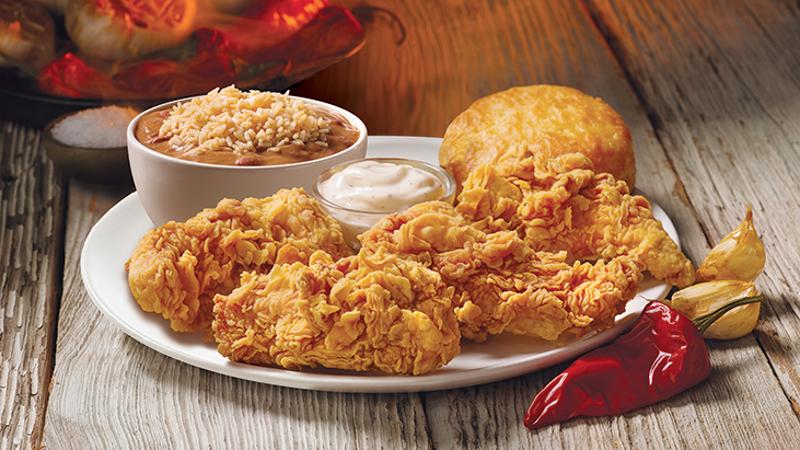 In the years since changing its name from Popeyes Chicken & Biscuits to Popeyes Louisiana Kitchen, the 1,900-unit chain has dug deeper into its Cajun culinary roots and played up heat, spice and authenticity. Following on the popularity of its Ghost Pepper Wings LTO in January, the QSR introduced Smoky Garlic Chile Chicken, timed to coincide with the start of barbecue season, says CMO Hector Muñoz.

Popeyes doesn’t have smokers at its units, so Amy Alarcon, VP of culinary innovation, relied on ingredients to impart smoky flavor to the chicken. The choice: chile morita, a red jalapeño that’s dried and smoked, like a chipotle. It delivers medium heat (2,500 to 8,000 Scoville units) and a fruity, complex flavor. “You taste other things going on besides just a flash of heat,” she says.

Online, some called Popeyes’ earlier LTO too tame, but “we don’t like to deliver heat for heat’s sake,” she says. “We prefer to layer flavors with a dash of heat.” For this dish, its supplier creates a dry spice blend with the morita and smoked garlic to boost smokiness.

On-site, the chicken tenders are soaked in a marinade made with the morita-garlic blend. “Marinating makes the chicken juicier than a dry rub,” says Alarcon.  The tenders then are hand-breaded with the same coating it  uses for other chicken items  and fried, reducing the training and SKUs needed for the LTO.

“Sometimes we like to have [a] sauce cool off a spicy product and other times, we use sauces to pick up on key flavors in the protein,” Alarcon says. Its proprietary  garlic-herb dipping sauce (roasted garlic, lemon and herbs) does the latter here.

Popeyes debuts an LTO every four weeks, some new and some back for an encore. The regular rollouts have helped spur sales, analysts say; first-quarter revenues were up 14 percent over last year. In July, its spicy fried butterfly shrimp will return as a featured item. “Shrimp index higher in the summer,” says Muñoz.