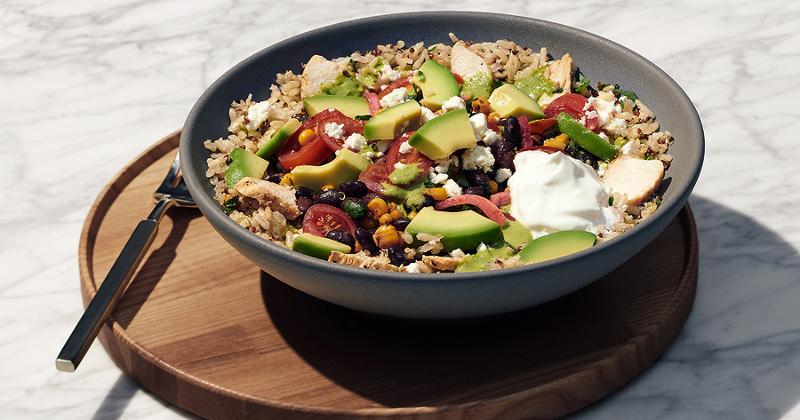 Plant-based burgers made big news last year, with Burger King, White Castle, Denny’s and Carl’s Jr. among the Top 500 chains adding them to the menu in 2019. But branded burgers from Impossible and Beyond aren’t the only items moving the needle in restaurants. Other chains in the Top 500 are seeing bumps in sales and/or traffic with imitation chicken, veggie-forward bowls and meat-free breakfast items.

Panera Bread (No. 10) recently boosted its plant-based offerings to 25% of the menu and expects that number to increase to 50% in the near future, with the goal of offering at least one vegetarian option in every category by 2021. “We conducted a study with our guests, asking ‘What are you looking for in plant-based eating?’ and 47% are looking to reduce meat consumption,” says Sara Burnett, VP of wellness and food policy for Panera. “And that 47% went across all generations. Very few described themselves as vegan or on a special diet.”

But customers are not looking toward Panera for faux meats, says Burnett. Plus, “there isn’t a product that meets our clean-label criteria.” What guests are looking for are nuts, seeds, grains and vegetables, the survey found.

Last September, the chain launched grain bowls, offered both with and without chicken. The ingredients, which can include brown rice, red and gold quinoa, avocado, black beans, hummus and other veggies, were hearty enough that only 25% of guests ordered the bowls with animal protein, Burnett reports. “The category of bowls is new for us,” she says, “but they are outperforming. We sold 5 million bowls in the first 10 weeks.”

Panera also sources freekeh, spelt and seasonal vegetables to develop menu specials. For operational ease in a fast-casual setting, the grains come into the stores precooked, and the beans are a frozen, fire-roasted product. “It’s all about the pantry you create,” says Burnett. “Customers want to continue eating this way, and this is going to be Panera’s direction going forward.”

“We conducted a study with our guests … and 47% are looking to reduce meat consumption. … Very few described themselves as vegan or on a special diet.” —Sara Burnett, Panera Bread

There was a lot of hoopla around KFC’s one-day test of plant-based chicken in Atlanta last year, with the menu item selling out in five hours. Now it’s being launched in a couple of other markets, and other chicken concepts are getting in on the action. 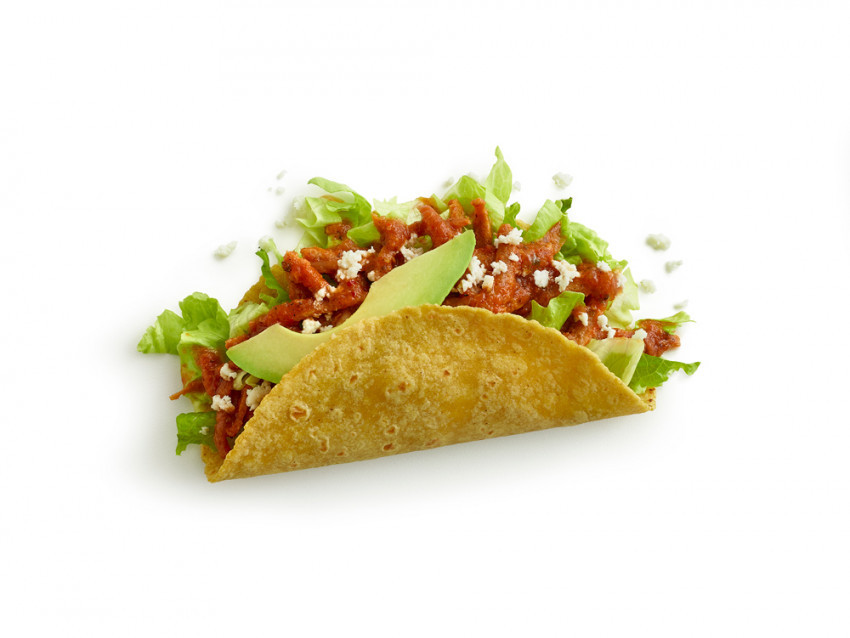 El Pollo Loco (No. 54) debuted the Chickenless Pollo Taco and Burrito earlier this year at all 485 locations. The chain is menuing a soy protein product that emulates shredded chicken, rather than a patty or nugget. “Given that we were the first restaurant brand to launch plant-based chicken systemwide, we wanted to differentiate our product and work with a supplier that could exclusively produce this for us,” says Bernard Acoca, president and CEO of El Pollo Loco. “We also wanted a product that was non-GMO and produced in the United States, which forced us to exclude certain suppliers.”

To reflect the chain’s Mexican-influenced menu, the culinary team created a slow-simmered tinga sauce for the chickenless pollo filling, adding sauteed onions, poblanos and chipotles, then stirring in roasted tomatoes, herbs and spices to blend the flavors. The plant-based taco and burrito were tested extensively before rolling out, and customers have responded favorably, says Acoca.

“Coming off the heels of the successful launch of our better-for-you offerings earlier, we closely listened to our customers and felt confident that adding a plant-based protein to our menu would meet their lifestyle needs,” Acoca says.

Thinking outside the burger

Qdoba Mexican Eats (No. 53) also worked closely with a supplier—this time, Impossible Foods—to develop a proprietary flavor profile for its plant-based meat. “We’ve always been vegetarian- and vegan-friendly, and this was a way to continue the journey,” says Karin Silk, VP of menu and off-premises for Qdoba. In keeping with its Mexican theme, the meat alternative is seasoned with a chile-garlic blend. 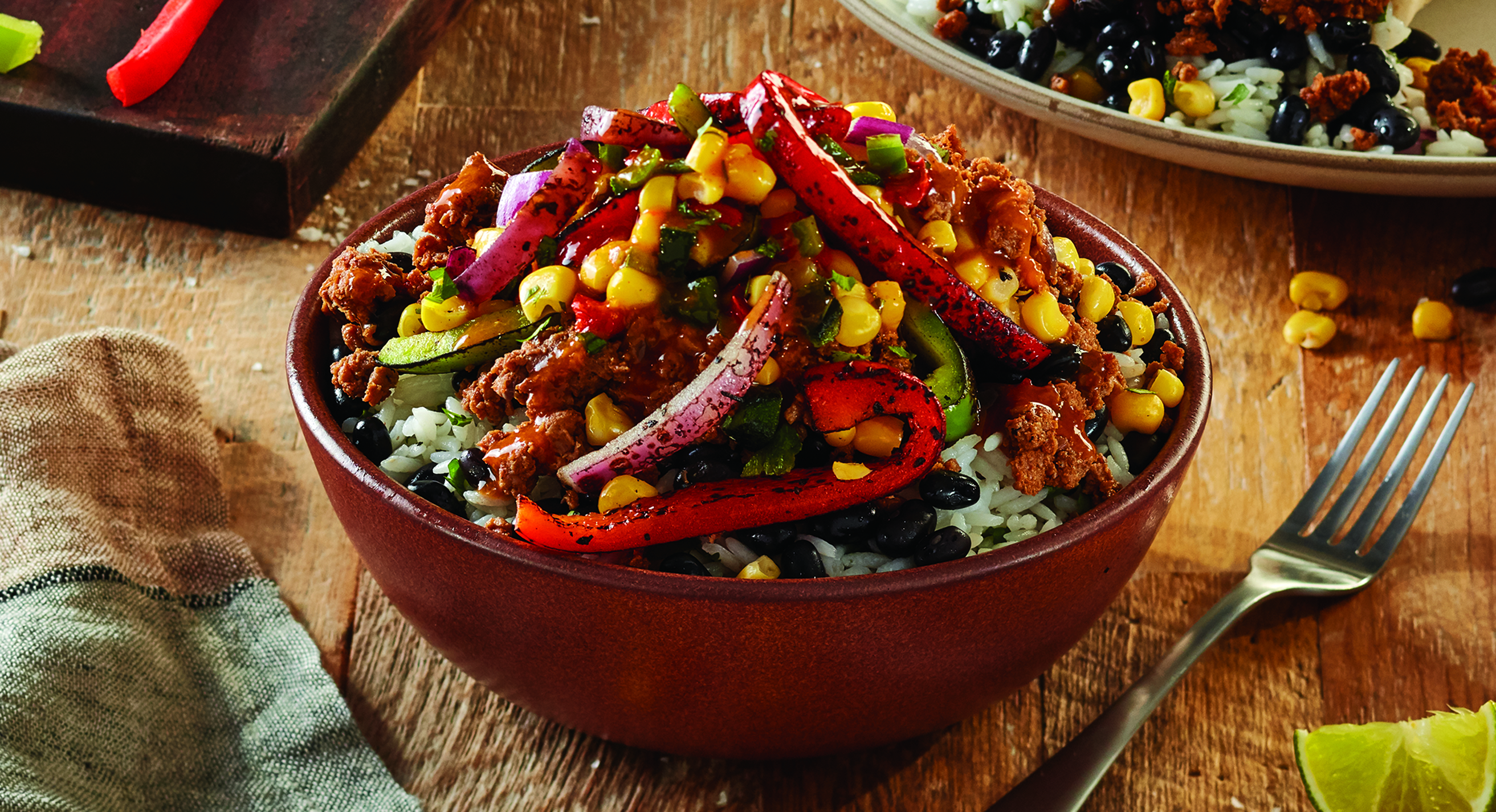 In spring 2019, Qdoba debuted four items featuring the seasoned product, all branded with the Impossible name: two bowls, a taco and a burrito. “The launch was an immediate success,” says Silk. “It brought in new guests and brought back former customers.” Incremental traffic increased, especially in urban and college communities, and the items accounted for sales “in the mid-single digits” of the menu mix, she adds.

Silk attributes the success to being at the forefront of the faux-meat trend in the fast-casual segment and knowing the Qdoba guest. “Although we got a lot of excitement on social media from vegetarians, our customer profile is meat eaters, not vegetarians,” says Silk. Now the seasoned Impossible meat is available as a choice with any Qdoba item, along with brisket, chicken, steak and fajita veggies.

Taco Bell (No. 4) is going in a different plant-based direction. In March, the chain introduced Veggie Mode, a function of its ordering kiosks that unlocks nearly 50 American Vegetarian Association-certified plant-based items on the menu. 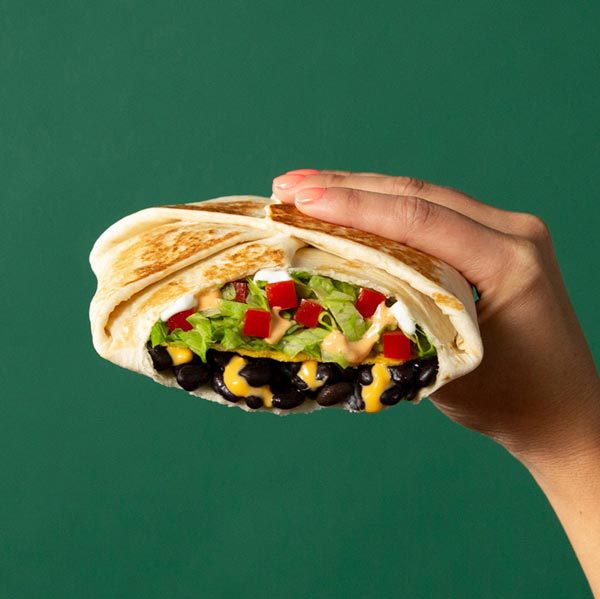 About a quarter of Taco Bell orders include at least one meatless item. (Photograph courtesy of Taco Bell)

The new platform meets the demands of Taco Bell’s vegetarian customers; about 25% of transactions contain at least one meatless item, says a spokesperson for the chain. The bean burrito and spicy potato soft taco are among the top vegetarian sellers.

“We are currently exploring new partnerships to roll out meat alternatives, and while we’re excited about the potential of these future offerings, it’s important for us to make sure that whatever we do feels unique to Taco Bell and a stretch from what you see the rest of the category doing,” says the spokesperson.