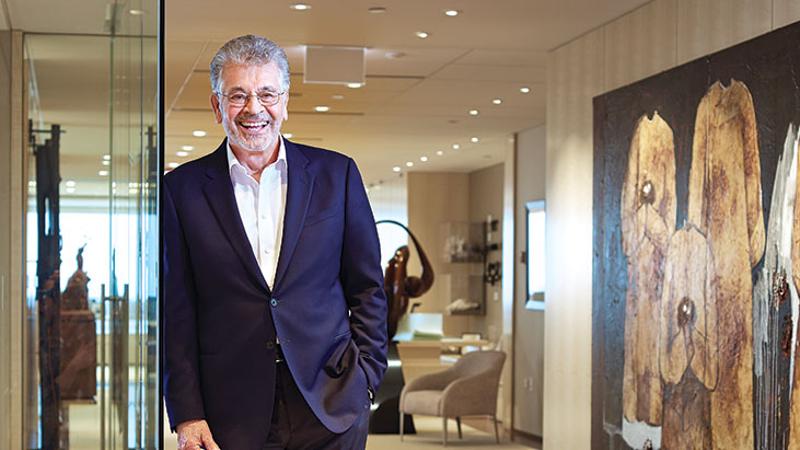 If you’re not from Chicago, a Maxwell or Cake Shake might not mean anything to you. But it should. That’s because those signatures come from what might be the biggest fast casual you’ve never heard of.

Average annual sales at Portillo’s, which began as a hot dog stand in a suburban Chicago parking lot, today sit at about $8.5 million per store at newer units. When Portillo’s opened in Arizona in 2013, it brought in $438,000 after tax its first week with lines nearly 500 deep. That was enough to gain the attention of Boston-based private-equity firm Berkshire Partners, which acquired the nearly 40-unit chain from its founder Dick Portillo for an estimated $1 billion.

Remarkably, Portillo knew nothing about running a restaurant when he opened that first The Dog House stand in 1963. “I didn’t even know how to steam a bun,” he says. He picked it up quickly, stealthily peeking in the back of restaurants. “We were really struggling at the beginning,” he says. “People have no idea how hard it was. It didn’t come overnight. It came from passion and sacrifice and hard work.”

It also came from some creative business maneuvering, which Portillo exhibited throughout his tenure as head of the chain. When business was off to a slow start at the stand, Portillo asked a customer who owned a printing shop to print a small ad on scraps of paper offering four hot dogs and four fries for $1 in exchange for feeding his family a few times a week. He placed those flyers on car windows in the discount store’s parking lot he shared. Ten minutes later, the line was 20 to 30 people long. From what Portillo credits as his first marketing move, business started to double.

With money he’d saved, along with funds borrowed from the owner of the shopping center (a bank turned him down for a loan), Portillo had a neighbor build a second stand that was twice the size of the first. “The business kept doubling after that,” he says. And as he grew, he maintained the same goal: to give consumers an experience they didn’t think possible from a limited-service restaurant.

Unlike today’s LSRs that aim to simplify operations for ease of execution, Portillo went the opposite route. “I purposely designed the most complicated fast-casual business in the industry,” he says, having adopted the model before “fast casual” was even a thing.

Partly, it was a desire for uniqueness. He knew he didn’t have the funds to go up against the concepts he saw as his competition at the time—McDonald’s, Burger King and Wendy’s. “I had to do something different if I was going to stay alive and well in this business.”

As a former marine, he explains his other reasoning in military terms, likening Portillo’s to a castle with a moat of complexity around it. The enemy at bay in this case: the competition. “The difficult thing here was the complexity of the design of the menu,” he says. “There are so many different things made in so many different ways.”

He contrasts the operation to In-N-Out Burger, of which he’s a fan (“It’s just one burger, one patty, one bun. Single, double or triple. Simple stuff,” he raves). Hot dogs alone make up 12 percent of Portillo’s business—it goes through more than 40,000 pounds of them a week—and Portillo asserts that there are 256 ways to make the dogs. It adds in Italian beef sandwiches, sausages, fish, chicken and salads. “Take all those combos, put them under one roof, and you’ve got yourself a whole lot of organization and training to do. That’s the moat. To get through the moat to get to the castle is very difficult.”

Besides keeping out the competition, Portillo had another reason for building his brand around such an intense menu. “I wanted to have something that the masses could do often,” he says. “We are not in the hot dog business, we are in the restaurant business, the food business.”

Embracing complexity isn’t the only philosophy that sets Portillo apart from today’s restaurateurs. While the modern c-suite may be a den of collaboration, Portillo wanted his teams to stay in their lanes. He explains the structure as a grid where people focus on their specialties, what they are best at. Operations people, legal people, training people, construction people, maintenance people, they all stay in their grid and they all move at once, he says. “The problem is when they start jumping from grid to grid, that’s when the problems come.” To him, that order was necessary to pull off the Portillo’s experience. “When [guests] place an order, a unique chain reaction is created. That was a labor of love with me,” he says.

Opening in California in 2005, more than 2,000 miles away from Chicagoland, was a test. Although there were some logistical issues—mainly with training (there was no store to train 200 new employees on the complex operations) and supply (there was no nearby commissary)—the launch was a success. “The first week was unbelievably crazy; there were lines like you wouldn’t believe,” he says. After the Portillo’s Arizona launch three years ago, another success, he knew the brand had legs. “I proved it,” he says. That’s when Portillo knew he was ready to bring in outside help to grow the chain.

“There were 24 private-equity groups after my company,” he says. But Portillo was looking for a specific type of leader to take charge. To describe that ideal leader, he reads a quote from a piece of paper: “We don’t need the kind of leader that reads balance sheets better than people. We need the type of leader who rolls up his sleeves, brings everyone together, gets them united behind the strategy to solve the problems and makes sure they are invested, and then works alongside them to be sure that it’s done.”

Before each meeting, he’d get background information on the executives and accountants from the companies he would be speaking with—he wanted to know who he was talking to. And he said the same thing to each of them: “You all have MBAs. Whoever buys my company will not be a success unless you get a P.H.D.” Following the inevitable frown, he’d add, “A Portillo’s hot dog, (P.H.D.).”

In the end, Portillo went with Boston-based Berkshire Partners to carry on his vision: to feed as many of the masses as possible and give them a pleasant experience. “As long as the Berkshire people keep up the culture that took a long time to develop, then they’ll do okay—if they maintain the training and the organization and the uniqueness of it,” he explains.

Even though Portillo no longer heads the chain, he hasn’t washed his hands of the brand that bears his name. Through his new company, R&S Growth Management, he oversees several real estate investments. Those properties include owning the land on which several Portillo’s restaurants sit, as well as the land for the two commissaries, which occupy more than 100,000 square feet. As for the chain’s future: “You can’t tell me one large chain in this country that does not fear the name Portillo’s being next to them.”

What’s one thing you would tell your younger self?

Spend more time with the kids. There was no [work-life] balance. I was running five restaurants by myself.

What kind of leader are you?

Why didn’t you ever franchise?

I had so many opportunities to franchise, but it would dilute the standards that I set. My standards are pretty doggone high. When you franchise, you don’t own it, they do. … And I had flexibility to move. I didn’t have to answer to a committee.