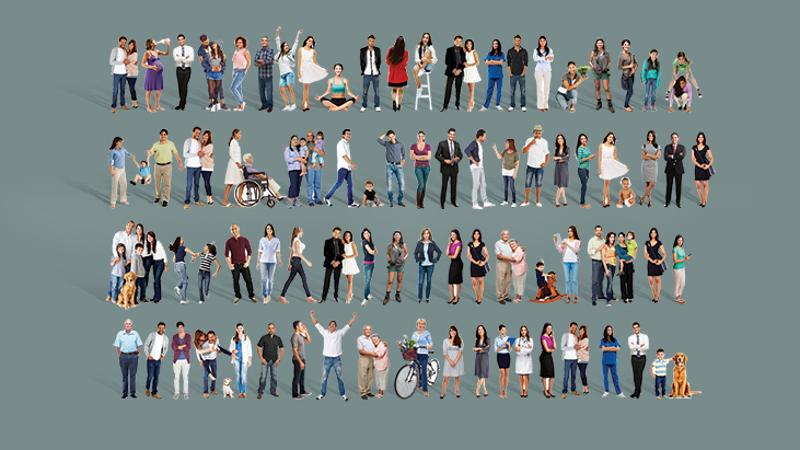 Mauricio Arroyave has his feet in three worlds: Latin America, the United States and the restaurant industry. Born in Colombia, he was a toddler when his mother immigrated to Chicago. He was 12 when his older sister, who was working at Domino’s, started him hanging door flyers in exchange for sodas and pizzas.

Today, he’s an operating partner in Domino’s franchisee MARR Chicago Pizza with 24 area stores. But pies aren’t all he sells. He speaks to Hispanic student groups about how to achieve their slice of the American dream. He appeals not only to his customers’ appetites but to their aspirations.

“My mother was divorced, taking care of three kids and working multiple jobs, similar to a lot of families in this country,” says Arroyave. “First-generation Hispanics, it’s kind of like they have to come here and prove that they’re willing to work harder than anybody else.”

His upbringing suggests something else: While some marketers may view Hispanic consumers as a single demographic group, the reality is that one Hispanic consumer can embody a complex mix of cultures. As restaurants court America’s 57 million Latinos—projected to generate 57 percent of U.S. population growth over the next 20 years, according to the U.S. Census Bureau—they’re learning they have to speak to several of those cultures at once.

Today’s Latino consumers “are continuously being influenced by both Hispanic and American culture,” says Juan Ruiz, senior multicultural analyst with market research firm Mintel. A November 2014 survey of 1,000 Hispanic restaurant patrons by Mintel found the largest segment—50 percent—identified equally with both. “The vast majority of the market is now bicultural, moving back and forth between the two,” Ruiz says.

It’s no longer enough to rewrite some ads and a website in Spanish. A foodservice operator needs to be literate, not just in language, but in tastes, traditions and values. That might mean telling stories of achievement, like Arroyave’s. It could be targeting promotions to different times of day or days of the year, or looking at families and flavors in a new way.

“It’s important to understand the nuances,” says Sara Monette, senior director of consumer insights for researcher Technomic. “There are unique needs and expectations around foodservice for that group, and brands that go directly to the needs of Hispanic consumers tend to do well with them.”

Want to make a deeper connection with Hispanic diners? Here are some key cultural cues, backed by market research, and ways in which restaurants are considering them in their marketing efforts to win with this critical consumer group.

As part of a drive to boost the status of Wendy’s with Hispanic diners, the home office sent out a kit to its stores near population centers. Besides Spanish-language descriptions of many of Wendy’s items and phrases to use with customers, the kit included door signs and lapel buttons reading, “Hola.”

“It’s a small thing, but it communicates to the consumer that they’re welcome here,” says Liz Geraghty, vice president of marketing at Wendy’s. “It tells them that if they order in Spanish, we will reply in return.”

A simple sign of invitation can be more important than it might seem, says Arroyave. “That first occasion is critical. If [customers] get uncomfortable, if they feel you’re not understanding their language, they don’t come back.”

2. Consider Spanish, even with English-speaking audiences

When Technomic surveyed restaurant operators, it found only 4 percent had advertised in Spanish. But of those that did, 40 percent reported a large impact.

Why should that be, when three-fourths of Hispanic diners speak English, according to Mintel? Because for many, language is a linguistic comfort food.

“Spanish might not be the language of the transaction, but it’s the language of trust,” says Orlando marketer Wilson Camelo, who’s done Hispanic ads for doughnut chain Krispy Kreme. “It signals that they get me, they want to build a relationship with me.”

That’s the pull of Spanish-language television, says Peter Filiaci, vice president of strategy and insights for Univision. He says many of the Univision network’s viewers speak mostly English, but they’re watching with Spanish-speaking relatives. “It’s hard to reach a critical mass in the Hispanic population without Spanish-speaking media,” he says.

More chains are getting the message. Separate restaurant figures were not available, but U.S. advertisers spent $7.2 billion last year on Spanish-language TV, according to media monitor Kantar Media. Those budgets were up 15 percent, versus 6 percent on television overall.

Not all English slogans convert well into Spanish, says Joe Zubi, who creates ads for Dunkin’ Donuts and Olive Garden. For instance, the tagline “America runs on Dunkin’,” needed tweaking for its Spanish iteration because a literal translation suggested jogging. In the spots, the Spanish message translates in English as  “America moves with Dunkin’.”

Wendy’s hires a firm to do all of its translations, says Geraghty. “We want to make certain we’re communicating the intent of the words, not just translating the words themselves.” She points to the chain’s Asiago Ranch Chicken Club and its tagline, “Go big. Go Asiago!” It’s a play on a saying, “Go big or go home,” that has no Spanish counterpart. Instead, Wendy’s Spanish version translates, “Choose the large. Try the Asiago!”

4. Extend the definition of family

When Domino’s was designing a new product bundle, it talked to Hispanic families, says Victoria Petrella, director of activation and nondigital media for the pizza chain. “When you look at a category like pizza, it’s something you can share with a family—families being such a key fundamental when it comes to Hispanic culture,” she says.

The result was a special with two medium pizzas, two liters of Coke and 24 servings of sides. The average Hispanic household is 37 percent larger than the overall U.S. average, according to U.S. Census figures. For restaurants, that means bigger family groups. Univision reports 48 percent of Hispanic casual-dining visits are parents with children—compared to 35 percent for non-Hispanics. A third of those visits include other relatives.

To accommodate extended families, restaurants should be prepared to extend their space and their time, advises Filiaci. “Don’t have seats bolted down. Have flexible seating so that you can move tables together,” he says. “They may take a little bit longer, so let them know they’re welcome to stay as long as they want.”

Univision notes that Hispanics are 43 percent more likely to grab a fast-food breakfast than non-Hispanics.

Denny’s, where a quarter of diners are Hispanic, focuses its Spanish-language advertising on its breakfast platters, for example, with a pounding rap video for its Red, White and Blue Slam. “Our breakfast menu is one of the things we’re known for, and it’s one of our strengths with Hispanic consumers,” says Denny’s Chief Marketing Officer John Dillon. “We sell it not just during breakfast but across different dayparts.”

And don’t sleep on traditionally slower times. Univision reports that Hispanic consumers are twice as likely to have a late-afternoon snack and 125 percent more likely to eat out after 8 p.m. At drive-in chain Sonic, “we target Hispanic consumers with two particular dayparts, the afternoon and evening,” says Tamara Stanley, the chain’s director of media and multicultural. “Both provide a strong discount, with half-price drinks during happy hour and half-price shakes in the evening.” Several recent beverage additions feature distinctly Mexican flavors, such as Jalapeño Chocolate and Salted Caramel.

When Hispanic diners choose mainstream restaurants, they’re not looking for a faithful chile relleno, says Monette. Instead, research reveals an affinity for American fare with Latin touches. “It doesn’t have to be authentic to that cuisine,” she says. “But it has to be authentic to your concept.”

At Denny’s, that means adding chorizo to its skillet meals or mango to a lemonade or smoothie. “At first, we thought we had to dedicate a section of our menu to Hispanic flavors,” says Dillon. “We found out [our customers] just wanted Hispanic flavor influences in our existing food. The beauty is that Hispanic flavors are becoming more and more a part of the general market.”

7. Appeal through the cup

“A lot of Hispanics come in for a coffee, and they walk out with a sandwich,” says Zubi. Most get a beverage with their food—93 percent, Univision reports. That’s why some chains are adding Latin touches to existing coffee drinks, such as a Caramel Flan Latte at Starbucks or a Horchata Frappe at McDonald’s.

“Beverages are great for chains, because they’re such high-margin products,” says Filiaci. “It’s helping to drive a higher average check for Hispanics.”

Another window for beverage sales opens at happy hour. In casual restaurants, 65 percent of Hispanics had ordered an imported beer in the past three months, Univision found, and 43 percent had sipped a frozen cocktail.

These days, even Anglos celebrate Cinco de Mayo. But how about Cuaresma, also known as Lent?

For many Hispanics, it’s a time to eat less meat. For Dallas-based Pizza Patrón, whose clientele is largely Latino, it used to mark a 4 percent drop in sales. Now, says EVP Andrew Gamm, “We typically feature a Lent-safe product inside our stores. One year, we did a tuna pizza, called La Marinara, with tuna, bell peppers and jalapeños.”

The chain hypes other Latin holidays, as well, including May 10, Mexico’s Mother’s Day, when moms get free pizzas, or the bicentennial observance of the Mexican Revolution, when it gave out coupons on the backs of loteria cards, a south-of-the-border version of bingo. “We have a close connection to Mexican traditions,” says Gamm. “It’s one of those things we build into everything we do.”

For Hispanics, part of upward mobility is digital mobility. Nearly half have searched for a restaurant with a smartphone, Univision says, while 25 percent have used mobile coupons. Twenty-three percent download restaurant apps, like those for Domino’s and Pizza Hut, which let users order online and in Spanish.

Millennials are a driving force behind those numbers. Not only do millennials account for 38 percent of adult Latinos, according to Census figures, but they’re the heaviest restaurant users. Univision reports 51 percent eat out 10 or more times a month, compared to 45 percent of all Hispanics and 25 percent of non-Hispanics.

“We’re really looking at the millennial generation as [a] primary consumer,” says Camelo. “We’re seeing that generation as being digital and social.” For Taco Maker, a Puerto Rican quick-service concept moving into Miami, Camelo’s designed a campaign that’s mostly mobile, texting ads and coupons to ZIP codes surrounding the stores.

“Every campaign that we work on has a mobile component,” says Tatiana Bengochea, spokeswoman for McDonald’s Hispanic ad agency, ALMA. The McDonald’s Spanish-language site now exists only in a mobile version.

“Its last family brand campaign shows a large family, including abuelos, tíos and primos, [grandparents, aunts and uncles and cousins] at a reunion,” she says. “When one family member texts that he’s at McDonald’s, they all use their phones, particularly emojis, to [text] their orders.”