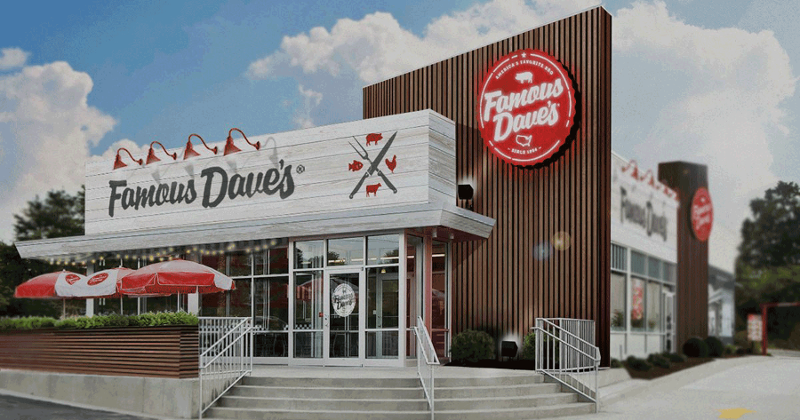 The Famous Dave’s BBQ chain is expanding its array of non-traditional expansion models amid signs that such tactics as ghost kitchens and co-branding appear to be working.

The newest venture includes offering the Famous Dave’s menu at a Cowboy Jack’s steakhouse and saloon in Woodbury, Minn. Famous Dave’s parent, BBQ Holdings, describes the arrangement as a co-branding, which suggests the Famous Dave’s items are offered for dine-in and takeout service as well as for delivery.

For the barbecue chain, the two-in-one operation replaces a full-sized Famous Dave’s that was sold for $2.6 million, according to BBQ.

BBQ also revealed that it may pursue a co-branding setup with some of the 25 Johnny Carino’s restaurants that will serve as ghost kitchens for Famous Dave’s under a deal announced last year with Carino’s parent, Blue Stone Holdings. Blue Stone is also a Famous Dave’s franchisee.

Another franchisee, Dave Crimmins, is offering menu items from Famous Dave’s at one of his three Texas T-Bone Steakhouses.

The co-branding efforts are in addition to BBQ’s embrace of ghost kitchens. The company has enthusiastically been using kitchens outside the Famous Dave’s system as a way of expanding geographically—a driver in the Blue Stone deal—and of taking the pressure of stepped-up delivery business off kitchens that now need to serve returning dine-in guests.

In an interview with Restaurant Business last fall, BBQ CEO Jeff Crivello said he’d like to have 50 ghost kitchens serving Famous Dave’s by the end of this year.

In addition to the deal for using 25 Carino’s units as ghost kitchens, BBQ is also producing Famous Dave’s products for delivery in seven units of the company’s secondary concept, Granite City Food & Brewery, with an eighth slated to open this month.

Meanwhile, BBQ is forging ahead with previously disclosed plans to boost Famous Dave’s to-go and convenience-driven sales by changing the concept’s mode of service. A typical unit currently relies on servers to take orders and run the food out from the kitchen. BBQ said it will open a scaled-down Famous Dave’s with a cafeteria-like serving line in Las Vegas this June under the name Famous Dave’s Quick ‘Cue.

The concept will incorporate what BBQ has learned from one of its recent acquisitions, Real City BBQ, a limited-service brand developed in Chicago by a chef. BBQ closed on Real City on March 16, 2020, or just as the pandemic was starting.

A second Quick ‘Cue format—this one sporting a walk-up service counter and a drive-thru—will open in Salt Lake City in June.

“The Quick ‘Que model is a huge leap forward for us,” Crivello said in a statement. “Not only will this model provide a more convenient experience for customers without compromising the quality of the food, but its build-out should also prove to be more affordable and profitable for franchisees.”

The various experiments with potential new expansion concepts come amid signs that BBQ’s two chains are having a sales rebound as their dining rooms reopen. For the week ended March 25, same-store sales at Famous Dave’s jumped 43.9%, and comparable sales at Granite City leapt 60.8%.

“As we begin to emerge from the state regulations caused by the pandemic, we are beginning to see sales ramp up to levels at or above pre-pandemic levels,” said Crivello.

Famous Dave's franchises about 98 restaurants and operates about 47 more.