Not to brag, but I’ve been getting a lot of compliments on my new glasses. (Although, often, it’s followed by a request to take on some additional work: “You look marvelous. Can you help me with this?”) My response to the praise is one companies dream of: More than just a simple “Thank you,” I can’t help but gush about the experience I enjoyed shopping for the frames, exchanging information with customer service and, ultimately, purchasing them. It was the breeziest experience I’ve had buying glasses, hands down—and at a price much less than I typically have paid.

What Warby Parker has done for the spectacles-shopping experience is what top restaurants strive to do every day—deliver a level of service that exceeds customers’ expectations and, better, compels them to spread the word. That’s one reason Fast Company magazine’s March issue has named 5-year-old Warby Parker “The World’s Most Innovative Company,” beating out quintessential innovators Apple (No. 2) and Google (No. 5) on the magazine’s list of 50 brands. What is Warby doing right that other businesses, even restaurants, may want emulate? Here are a few lessons: 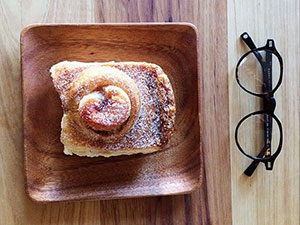 It’s no coincidence, that what Warby credits as the secret to its success is a philosophy also applied by some of the country’s top restaurateurs. “If we sum it up in one word, it’s ‘deliberate,’” Warby’s co-CEO David Gilboa told Fast Company. What looks effortless, the magazine explains, is actually well thought out; a concept Italians call sprezzatura.

More than one restaurateur has cited the same ideology as the guiding principle of their own operations. Scott Conant, chef-owner of Scarpetta in New York City, describes his newest restaurant Corsair, opened January 2015 in Aventura, Fla., this way: “The decor and menu items will be united through a sense of understated sophistication best described by the Italian phrase sprezzatura, an air of casual elegance or a certain confident nonchalance.”

In reimagining his James Beard award-winning Spiaggia restaurant in Chicago last year, chef-owner Tony Mantuano evoked the term as well, calling it a sort-of mantra for the restaurant (and his personal life) and “one of the reference points used to create the new look for Spiaggia.” Sprezzatura informs everything, he says, from the more-casual dress code to the menu design to the presentation of dishes and cocktails in the dining room and lounge.

Like Chipotle in the restaurant industry, Warby Parker has a business plan that can be replicated, investors say. And it has been, for selling everything from mattresses to shoes.

But, like Chipotle, few brands have managed to capture lightning in a bottle in quite the same way. That’s because, watchers say, co-CEOs Gilboa and Neil Blumenthal “are inventing this idea of what a technology-based lifestyle brand is.”

Chipotle has done it, helping push the Mexican chain into the realm of top 20 restaurant chains by systemwide sales. Its tactics of choice? Everything from music festivals to animated movies to games to packaging adorned with original poetry and art.

Warby, which started as an e-commerce retailer, is just beginning to introduce itself to the real world through brick-and-mortar stores it began opening in 2013. (Even now with 10, the stores still are more marketing tools for Warby’s website than profit centers in their own right.) It’s merely the next step in a relationship it already has forged with devoted customers through online response videos, emails and social media that reveal the real people behind the computer screen.

In response to a message I’d sent to customer service to say I’d uploaded an updated prescription for my order, I immediately got a personable email from “Justin” (who shared with me that he wears the “Crane” style of Warby Parker frames, himself) thanking me and letting me know, “We’re starting on your order as I type. Exciting stuff!” and reminding me, “If there’s anything at all I can help you with—shopping questions, eyewear questions, you name it—just let me know. I’m here to help.”

The approach apparently has paid off—in the distribution of more than 1 million pairs of glasses a year and annual revenues of well over $100 million, Fast Company reports.

3. Seek innovation from within

One of the ways Warby feeds its reputation as a brand that’s constantly forging new ways of doing things is to require every employee to submit an “innovative idea” every week, no matter how small.

It’s reminiscent of the culture Dominique Ansel—inventor of the Cronut—cultivates at Dominique Ansel Bakery in New York City. “Motivating employees to be innovative takes work, Ansel told Restaurant Business in November. “You have to let them try. It may not be my favorite idea, but until I see it, I won’t judge too early.”

4. Show employees the way to grow

In Warby’s largest and perhaps most important department, about 100 customer service reps answer phones, take questions and fulfill requests for add-ons, such as thinner lenses, to customers’ glasses orders. But rather than adopting a “freewheeling atmosphere” in its call center, a la Zappos—hoping the be-yourself attitude will keep workers happy for years to come—Warby patterns its model after the associate program at Bain Capital, where co-CEO Gilboa served time between earning his undergraduate and graduate degrees. The pitch: Answer phones for a couple years and rise quickly within the organization, Fast Company writes.

Restaurants have a similar story to tell. According the National Restaurant Association, nine out of 10 restaurant workers have moved to higher-paying jobs in the industry after their first job. They just have to become more skillful at telling it over the cacophony of chants about low wages, unpredictable hours and labor unions other pet protests.

5. No exceptions, no special requests … sort of

Fast Company’s reporter sat down for breakfast with Warby’s co-CEOs at a restaurant in Venice, Calif., that they insisted on visiting over a nearby coffee shop. “It’s an institution,” Gilboa said about Gjelina, the farm-to-table eatery they chose. Like Warby Parker, it takes a fundamentalist view of its brand, the article noted. “No exceptions, no special requests,” said Gilboa.

Several restaurants have tried to adopt a similar anti-“Have It Your Way” approach. Although, it seems to fly in the face of the basic tenets of the hospitality industry, it can work. The incredibly popular Umami Burger chain famously prints on its menu, “There is no substitution,” a phase intended to have the double meaning of being the best and not allowing special orders. Its website goes further: “Here’s the deal … all of our food is handcrafted with thought, artistry and love, so we encourage you to savor it as designed.”

This unbending policy is misleading, of course. Employees of such brands readily point customers toward options that are in line with their tastes. And just as Warby will accommodate—even market—some options, such as requests for high-index or progressive lenses, over the phone via customer service, so too does Umami Burger, which let’s guests go meatless (substituting portobello for beef) or bunless (with lettuce instead of bread), just by asking a server. The bottom line: It’s all about the relationship.