In a day that started with go-cart racing and ended with tips from a pro golfer named Woods (Cheyenne, not Tiger), attendees of the Restaurant Leadership Conference were treated to experiences and insights that extended far beyond business. But the core issues of boosting sales, profits and traffics were far from shortchanged. Here are some of the lessons that were served up to the 2,000 industry leaders in attendance on the first full day of the event. 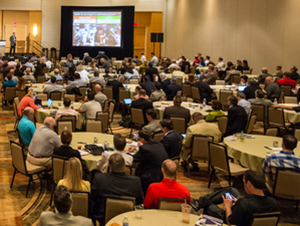 1. How much you pay for a lost employee

The cost for replacing an hourly team member is $1,100, and the expense of filling a vacated manager’s post is $14,000, according to the research firm TDn2K.

2. Turnover is back to pre-Great Recession levels

... which makes those numbers painfully real, said TDn2K Executive Director of Insights & Knowledge Victor Fernandez. Three out of four staff vacancies comes from an employee’s resignation to take another job, a dynamic that also hasn’t been seen since 2008.

Technomic christened it “QSR plus,” a group of familiar and emerging limited-service chains that see an opportunity in the market sliver between traditional fast food and pricier fast-casual concepts. It might also be called fast casual lite. The signature features are better, more wholesome food than what’s offered at national high-volume chains like McDonald’s and Taco Bell, but at a price below the double-digit average checks of the fast-casual market.

Think El Pollo Loco, Pita Hut, Chick-fil-A, Culver’s and In-N-Out. “They have an average check of $6 to $9, compared to $12 at Five Guys,” explained Technomic EVP Darren Tristano, who kicked off the education portion of the RLC with colleague Patrick Noone, the researcher’s VP of business development.

4. Not all fast casuals are created equally

The fast-casual segment grew 12 percent in sales in 2014 but build-your-own custom brands like Chipotle and Blaze Pizza grew 22 percent, according to Technomic. It attributed the discrepancy to desire by some guests to have interaction with whoever is preparing their meal, a direct challenge to so-called frictionless service.

5. Ice as a signature

The phenomenon is called “nice ice,” explained Noone, who noted that a new generation of ice machines is turning the ultimate commodity into a point of differentiation.

6. A restaurant’s assessment in social media is the truest predictor of sales and traffic

TDn2K provided several examples of correlations between restaurants’ customer ratings on Yelp and what kind of same-store sales a chain unit is posting.

The industry’s best performer from the last five years in sales growth isn’t Chipotle, Starbucks or Qdoba, but Little Caesars Pizza, according to GE Capital. The quick-service pizza chain’s compound annual growth rate for the last half-decade has been 10 percent, according to the financial-services giant. “The closest brand is [at] 4 percent,” said CMO Shannon Tolbert.

If operators hear the theme music from “Pyscho” whenever they think about all the data that’s available to them, “you got to get over it,” advised TDn2K chairman Wally Doolin, a recovering operator.