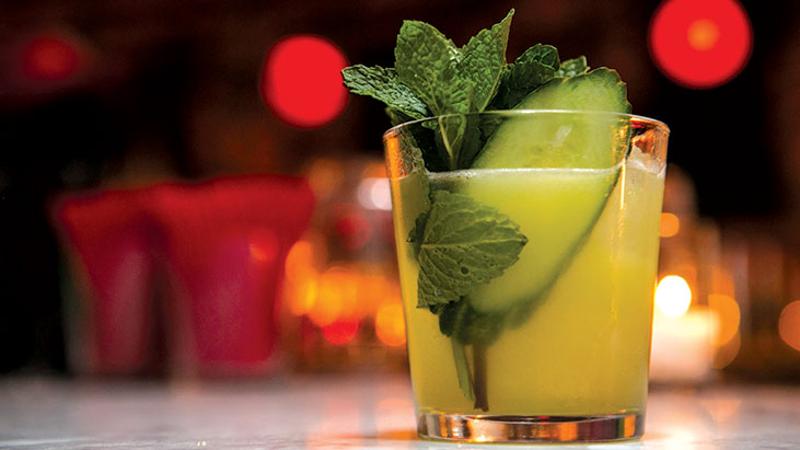 James Bond famously ordered his martini “shaken, not stirred.” Rocks, straight up; salt, no salt; call brands—all of these specs have long been guests’ prerogative at the bar. Now drinkers want in on the creative action in bigger ways.

“Today’s consumer is very interested in customization across food and beverages,” says Donna Hood Crecca, associate principal at Technomic. “In part, it’s a pushback of anything that looks or feels mass-produced, and it also gives the consumer a sense of engagement in and control over the eating and drinking experience.”

The new twist, says Crecca, is the trend toward “build-your-own” cocktails where the guest is presented with the option of choosing drink ingredients from several categories. The practice has the bonus, she says, of “ramping up the guest’s value perception regarding the experience.”

With a name like The Old Fashioned Tavern & Restaurant, it’s no surprise that the Madison, Wis., establishment’s best-selling drink by far is the eponymous cocktail. This being Wisconsin, its old fashioned cocktail is made with American brandy as the base and is as likely to be garnished with pickled Brussels sprouts as skewered cherries. That’s because customers can make their drink any way they want with the Build Your Own Old Fashioned Program.

“On a Saturday night, we will sell some 400 old fashioneds, and about 100 are build-your-own,” says general manager Jennifer Debolt. Guests are choosing the DIY option despite the fact that the restaurant’s drink menu already has a full page of old fashioned variations, she adds.

To concoct a custom cocktail, guests pick the booze, bitters, mixer and garnish. In addition to brandy, spirit choices include gin, rum, bourbon or rye. There also are four kinds of bitters, sweet or sour mixers, and fruit or vegetable garnishes such as oranges or marinated mushrooms. Staff is ready with recommendations for beginners.

The tavern’s classic brandy old fashioned is $5.50, while the Build Your Own version is $6.50. “It’s a good upsell,” says Debolt. The custom option especially appeals to regulars, who return to the restaurant because they can get the cocktail just the way they want it, she says.

“You pick ’em, we pour ’em” is the motto at The Happiest Hour, a cocktail bar and full-service restaurant in New York City’s Greenwich Village, where a section of the drinks list is devoted to cocktails that can be customized.

The seven customizable selections currently on the menu all are priced at $13. Bartender Jim Kearns crafts each to work equally well with gin, rum, tequila or vodka. For example, the aptly named Maid to Order is a mix of mint, cucumber and lime juice, plus the guest’s choice of spirit. It’s by far the best-selling drink in the house, says Kearns, on a list that includes many traditional noncustom cocktails.

“The advantage is a heightened level of guest involvement and satisfaction,” says Kearns. Giving guests the opportunity to choose the spirit they like provides better service and seems to almost guarantee a wider appeal, he adds.

Carts and kits on a roll

John Owen, owner of seven Cleveland-area bars and eateries, brings build-your-own drinks to the customer at his Market restaurant via a bloody mary cart. His carpenter brother crafted the wooden cart; when it’s rolled into the dining room during Sunday brunch, the cart’s array of fixings and squeaky wheels attract a lot of attention.

“We sell close to 200 bloody marys every Sunday, just because of the cart,” says Owen, who estimates that fully 90 percent of bloody marys are customized at the cart, even though Market’s drinks menu offers five variations. “Customers like the interaction and the choices,” he says.

Guests are given a pint glass filled with vodka and bloody Mary mix for $7 that entitles them to one trip to the cart, where they can choose from 36 locally sourced add-ins. The signature is a housemade pepperoncini stuffed with sour cream, bacon and chives. “As soon as someone walks from the cart with all this stuff hanging off their drink, other people say, ‘I gotta go get one,’” says Owen.

He came up with the cart when his new brunch program was slow to get off the ground. “So we flipped the idea around and made bloody marys the star,” he says. “That cart got people in the door. They came for the drinks but stayed for the food.”

Market also offers a mimosa kit at brunch, delivered to the table on a divided tray. For $35, guests get a bottle of prosecco and carafes of pomegranate, passion fruit, mango and orange juices, along with a bowl of fresh-cut fruit for garnishes.

Owen says his guests perceive the kit as a great deal compared to $7 individual mimosas, and most groups of four or more order the kit. Each makes about nine cocktails. Although margins are lower for the kit, Owen says he makes more in dollars because of the number of guests committing to a 750ml bottle of bubbly. “And we definitely sell more mimosas this way,” he adds.