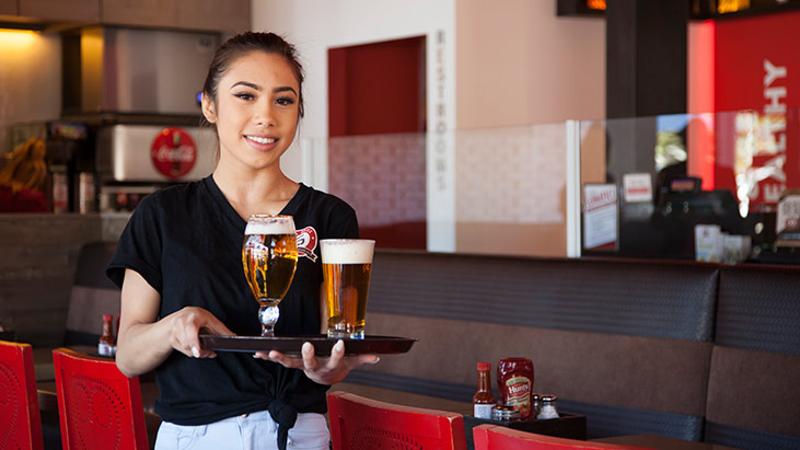 Although they engage with all types of beer, millennials and just-legal Gen Z drinkers prioritize quality and authenticity—characteristics that are boosting on-premise sales of imported and craft beers, according to Technomic. The challenge, says Technomic’s David Henkes, is how you allocate taps and manage rotation with the explosion of beers in these two categories.

For Chris Purcell, director of food and beverage for Tilted Kilt Pub & Eatery, the answer is a large and varied beer list. “Our [extensive] beer selection drives traffic, absolutely,” he says. Beer sales, which represent a third of the chain’s revenues, grew 1.5% across the 97-unit casual-dining concept in 2015. While domestic light lagers still represent 25% of that purse, Tilted Kilt also saw a 5 to 6%  growth in local and regional beers this past year. Scotch ales, porters and stouts also perform well for the chain because of its Celtic theme.

Purcell expects the numbers to look even better with a new beverage menu that launched in May. “A challenge with millennials is that loyalty to a flavor or style changes at a rapid pace,” he says. The new menu design solves that problem, he believes, as beers are organized by style category, with something for every taste—whether that’s a domestic light or a craft coffee stout.

Numbers also play a part. Previously, most Tilted Kilt units offered 33 tap handles with an additional 20 to 30 bottles or cans. The menu update expanded that to 90 unique beer selections at many units.

As a new tactic, Purcell is looking to introduce a smaller glass size for higher-alcohol specialty brews. The smaller portion will encourage trial;  and the price point will be premium, but still in line.

From the beginning, Smashburger has partnered with local breweries as a point of differentiation. “A key brand tenet is to pair local burgers with local beer within the areas we operate,” says CMO Josh Kern.

Those partnerships have turned into an effective marketing tool. “We utilize our social media pages to highlight regional craft beers, and the craft brewers share the posts,” says Kern. The synergy offers Smashburger a pool of potential customers they might otherwise be unable to reach. “We are growing our channels, Snapchat in particular, and Instagram has seen great gains this year,” he says.

One pain point of beer sales at fast casuals is how to sell that second bottle once guests order and sit down, says Kern. Smashburger has tried various methods: offering buckets of beer; buy one, get one deals; line-busting opportunities; and ordering apps—all with varying levels of success. Kern now is looking at installing monitored self-serve beer taps.

Fast casual Luna Grill, a 25-unit Mediterranean concept, has worked out its own solution. “We’ve trained our runners, bussers and managers on duty to approach the table and ask if anyone would like another beer,” says co-founder Maria Trakas Pourteymour. “It’s been very successful—the majority of the time, customers do purchase that second glass.”

The team member brings the bill for the additional beer to the guest in a check presenter. “He then takes the payment, processes it at the register and returns with a receipt—the same protocols as a full-service restaurant,” says Trakas Pourteymour.

Luna Grill offers three to six local beers on draft with one rotating handle for seasonal varieties; a glass goes for $5 to $6.