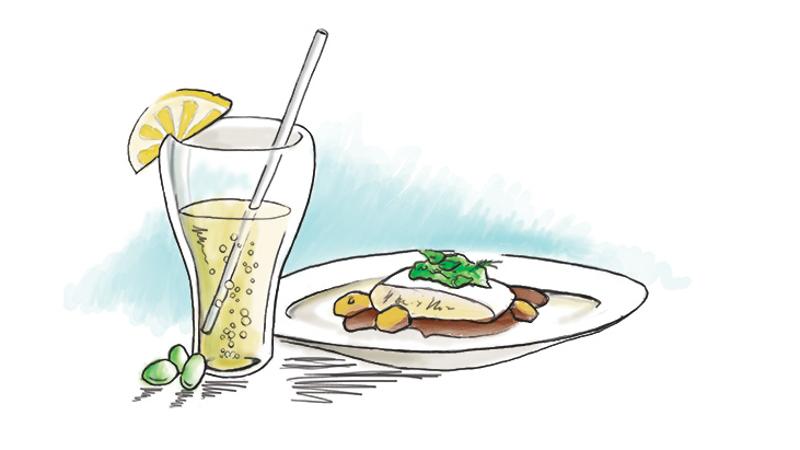 The question typically asked by a server—“Would you like a glass of red wine to go with that steak?”— now may include a nonalcoholic suggestion. Restaurants are recommending herbal teas, housemade sodas, drinking vinegars and other food-friendly drinks with tasting menus and a la carte items. For operators, nonalcoholic pairings are a way to boost the check. For guests, it’s a less costly alternative to wine, beer or cocktails, and an inclusive experience for those who don’t drink.

Kombucha, the fermented, effervescent tea, is the choice of Ben Tabor, chef-owner of Sneaky Pickle in New Orleans. “We are a vegan/vegetarian restaurant, and kombucha goes with everything we serve,” Tabor says. And since the drink is low in sugar and calories, it reinforces the concept’s health message, he adds.

Tabor says that the fermented characteristic of the organic kombucha he offers “has an umami quality which adds an extra layer of flavor to food.” For example, a pineapple-elderflower kombucha intensifies the taste of a caramelized onion-topped beet flatbread, he says. There are notes on the menu and the staff makes suggestions to promote the drinks, each of which costs $5 extra.

Some of Sneaky Pickle’s guests come in specifically to experience the pairings, Tabor says. “It’s not like LA where kombucha is everywhere. In New Orleans, booze is everywhere, and there are people who have been waiting for this type of food and beverage match,” he says.

Patina Restaurant Group has seen an expansion of business since it brought on water sommelier Martin Riese, according to management. Riese, who also works as GM for the Patina Group’s Ray’s and Stark Bar in Los Angeles, consults with diners on a list of 21 bottled waters to sip with their meals. The minerals in the water inform how it will pair with a food, he says. For example, a water with salty, bitter notes complements spicier Spanish foods, he insists, while one with a mushroomy flavor goes well with a truffled pasta. Bottle prices range from $4 to $20.

Since Riese initiated the program, Ray’s and Stark has seen a 500 percent increase in bottled-water sales. Based on that success, Patina is expanding the pairing concept to its Nick & Stef’s Steakhouse in downtown Los Angeles and the dining venues it runs in LA’s Hollywood Bowl. The water menu also has brought Riese a new customer base. “Kids love it,” he says. “They get a chance to taste and choose and feel like grown-ups.”

Guest input inspired Le Pigeon in Portland, Ore., to introduce nonalcoholic pairings. Last year, when hosting a customer’s wedding, “the groom told us that he didn’t drink, and that he’d just come back from New York City where he had the nonalcoholic pairings at Per Se,” says GM Sean O’Connor. Per Se offers mocktails, teas, juices and sodas with its $310 tasting menu. “He asked us if we could do something similar for his wedding, and we did,” says O’Connor. It was a hit—even the drinkers wanted to try the various options, he adds.

Now, the beverages—which could be a housemade black pepper, broccoli and celery soda with ricotta gnocchi and beef tongue or a white grape and fennel spritzer with poached halibut—are available for the tasting menus. Teas and mocktails, like the Thai Basil Mojito, also are an option, depending on the food menu. “Monetarily, this works because it’s an upsell,” O’Connor says. The pairings run $25 with a five-course tasting and $35 for seven courses. “At the end of the day, people are excited about this as an alternative,” he says.