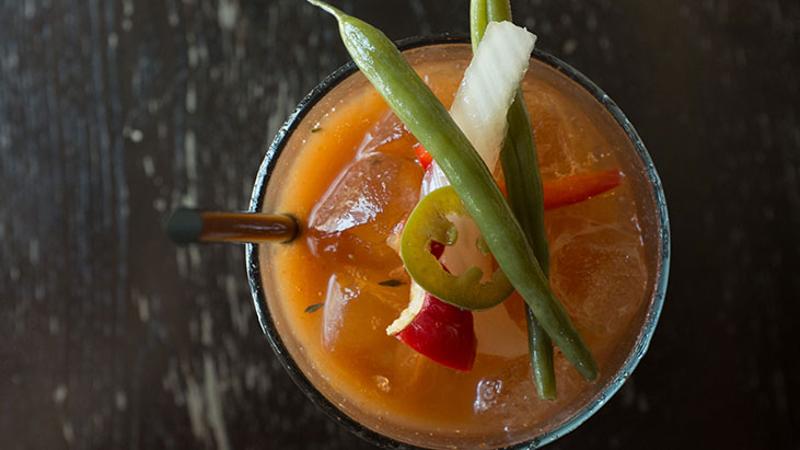 Call them shims, sessions or suppressors—low-alcohol cocktails are trending on drink menus. One reason: Operators offering a shims list can dodge the huge cost of a full liquor license.

“In San Francisco right now, a full liquor license costs about $250,000, and they are hard to come by,” says Trish Tracey, chef-owner of that city’s Myriad Gastro Pub. “It wasn’t in the cards financially” when Tracey opened, so she obtained a beer and wine license instead for just $3,000.

In addition to wine and beer, most such licenses also allow for other lower-proof alcohol. Although the list of what’s covered varies by locale, fortified wines (such as port, sherry and Madeira), sake, soju, wine-based aperitifs and amari are widely permitted.

“The art of the shim is a fun way to get around the liquor license problem,” says Marcus TenHarmsel, general manager at Hopfields, a casual French-inspired restaurant with a focus on craft beer in Austin, Texas. But the cost of a full liquor license was only part of the decision to offer suppressors, he says. Broadening the menu was another benefit. “The shims add diversity and sophistication to our menu that other beer bars don’t have,” he says. Plus, the addition of wine and wine-based cocktails was a way to override the veto vote.

At Hopfields, one successful approach to developing low-alcohol drinks is to mimic classic cocktails. Not only are these familiar to customers, the standardized recipes can be adapted to lower-proof libations. For example, the 75 Years in Provence, made with vermouth, elderflower, lemon, thyme and sparkling wine, is based on the French 75; the Port of Havana is a riff on the daiquiri made with white port instead of rum. For Hopfields’ bloody mary, a scratch-made mix is combined with sake instead of vodka and garnished with housemade pickled veggies.

Persephone’s on Fire pumps up flavor with jalapeno syrup and ancho-chili spice mix.

Without the extra flavor punch provided by high-proof spirits, it’s often necessary to ramp up drinks with fresh mixers. As with her food menu, Tracey plays up the handcrafted, culinary approach. The kitchen produces sweet and savory syrups, including lemongrass and smoked jalapeno as well as a smoky ancho-chili spice mix. All juices—citrus, beet, pomegranate and more—are freshly squeezed or extracted. Tracey says she has to combine a few bases to amplify the flavor of lower-alcohol cocktails.

Her Persephone’s on Fire, for example, is a mix of ancho-chili spice and grilled jalapeno syrup with fresh lime and pomegranate juices; it’s served in a glass rimmed with smoked salt. The alcohol of choice is low-proof agave wine and a French aperitif.

“There are plenty of places that only do beer and wine, so cocktails add to our dining experience,” says Tracey. She also credits being able to menu cocktails with boosting brunch business. “We sell a lot of cocktails at brunch because we offer an interesting selection,” she says, pointing out drinks such as the Tai Fighter (orange wine, soju, bitters, lime and guava) and the Ruby Slipper (prosecco, lillet blanc, grapefruit and elderflower), both $10. “It’s not just mimosa, mimosa, mimosa.”