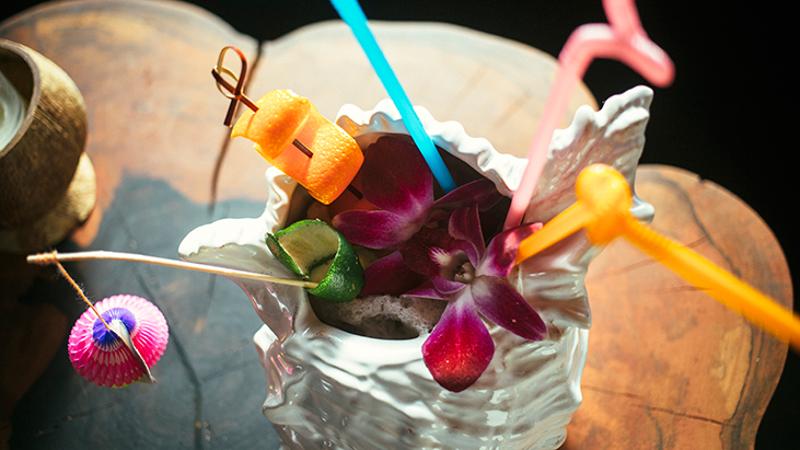 Trader Vic’s may have launched the tiki trend in mid-20th-century America, but today’s wave of tiki bars has moved the genre from Polynesian kitsch to full craft-cocktail treatment.  Some chains have taken a page from hip tiki concepts such as Lost Lake in Chicago and Beachbum Berry’s Latitude 29 in New Orleans, adding beachcomber cocktails to their lists. The move, they have found, can drive traffic and sales. But the challenge is that tiki drinks typically contain several liquors, juices and modifiers and are topped by elaborate garnishes, making them more difficult to execute. Here’s how some operators have met the challenge.

While early tiki concepts used concentrates and canned juices, today, it’s all about fresh juices and quality ingredients, says Rob Goldberg, EVP, restaurant division for Seattle-based Tommy Bahama. “You won’t become a destination for tiki cocktails by cutting corners. And people are willing to pay a little more for a great drink,” he says.

“We’ve upgraded tiki recipes by using the freshest juices, homemade syrups and premium spirits,” says Robert Ferrara, bar director for The Rum Line, a bar atop the Loews Miami Beach Hotel. To bring attention to the drinks, the hotel launched “Tiki Thursdays,” where guest chefs cook out on the rooftop, matching the food with featured cocktails.

“Many tiki cocktails are complex but there are a couple that are straightforward and easy to execute,” says Goldberg. Among the drinks with four ingredients or less in the rotation at Tommy Bahama’s 14 locations is the Dark & Stormy, which is made with ginger beer and rum.

However, most tiki drinks aren’t so simple. “To streamline production, it all starts with mise en place,” says Ferrara. “We have our service wells—a.k.a. the bartender’s cockpit—set up with everything within arms’ reach.”

At Tommy Bahama, the crew pre-preps all the fresh juices and cuts all the fruit. “Otherwise bartenders can get bogged down with guests waiting forever for drinks. And you won’t be able to produce the volume you need to make money,” Goldberg says.

Batching is a tried-and-true method to speed service—and it’s adaptable to tiki drinks. The classic mai tai is Tommy Bahama’s best-seller, so bartenders premix the orgeat syrup, curacao and lemon and pineapple juices; when an order comes in, they add two rums to the mix and shake with ice.

Bar Charley in Washington, D.C., takes it a step further by putting its two tiki drinks on tap. “Our tiki taps are super popular and arguably our top-sellers,” says GM Carlo Bruno, about the $7.95 drinks. “Kegging serves as a way to relieve some of the pressure on the bartenders during very busy shifts.” It works especially well for the Molokai Mule, made with seven ingredients, and the Suffering Bastard (six ingredients, including housemade ginger-beer syrup).

Flashy garnishes are important finales for tiki drinks, but they don’t need to be labor-intensive or expensive. At The Rum Line, Ferrara cross-utilizes cocktail ingredients. “We fresh press a ton of pineapple for juice, then we utilize the leaves for garnishes and the pineapple top for our large-format mai tai,” he says. Twists of citrus are used as garnishes, then the fruit is juiced for other drinks. And at Bar Charley, Molokai Mules and Suffering Bastards are served in decorative mugs depicting Polynesian gods—no garnish needed.