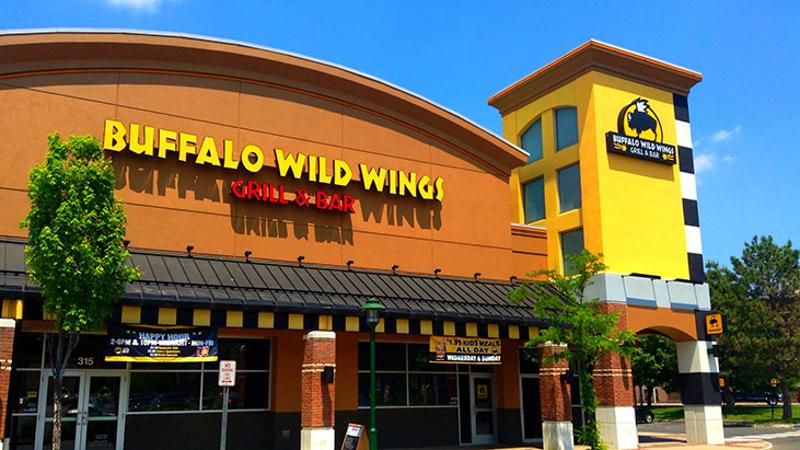 Buffalo Wild Wings is considering additional discounts for its signature chicken wings and a guarantee on lunch service times as ways of reversing a decline in sales at restaurants open for at least a year.

Starting Monday, the sports-bar chain will also feature a happy hour, with discounts extending to a house margarita. "When we tested the new happy hour offerings, we saw an increase in sales and traffic," said CEO Sally Smith.

In addition, she noted that BWW will also use the World Cup soccer tournament as a promotional opportunity, and that a test of a new loyalty program, Blazin’ Rewards, is being expanded. Addressing a frequent question from investors, she also revealed that the chain is following other casual brands in testing tabletop tablets that allow customers to place their own orders and pay at the table. An experiment with a pay-ahead function for customers, PayBDubs.me, is continuing.

Smith noted that computer and smartphone orders already account for 14 percent of BWW’s takeout sales, compared with an 8 percent share a year ago. She stressed that takeout is an opportunity for BWW. About 16 percent of unit sales are already generated via carryout orders, and the chain will try to raise that volume in part by adding large, group-sized takeout portions as an options.

The flurry of moves come after the franchisor posted a same-store sales decline of 1.7 percent at company-operated restaurants and 2.4 percent at franchised stores for the first quarter.

Revenue for the casual-dining leader rose 15.4 percent, to $508.3 million, driven largely by the opening of 100 BWW restaurants during the quarter. Net income was $32.8 million, a year-over-year increase of 12.8 percent.

“We are dissatisfied to report a same-store sales decline and we’re undertaking several sales-driving initiatives to regain momentum,” CEO Sally Smith said in a press release announcing results for the quarter.

Later, in a conference call with financial analysts, Smith and members of her team detailed a number of ways BWW plans to reverse the slide in comps.

Those tactics include a service guarantee for customers who order off the chain’s Fast Break lunch menu, a special mix-and-match bill of fare that was drafted to keep a sit-down lunch under 40 minutes. The chain says that a guarantee of a quick lunch is currently being tested, but did not disclose what service time is being tested or what happens if that limit isn't met.

In addition, Smith and COO Jim Schmidt mentioned experiments with the pricing and portioning of chicken wings on Wing Tuesday, when many stores in the chain drop the price of the menu signature. Some stores are reportedly charging as little as 50 cents per wing, though other indications in social media peg the price as around 69 cents per item.

Schmidt said several discounts and bundling options will be tested in June, but declined to reveal specifics. New advertising will be part of that test, Smith added.

BWW joins a long and growing list of casual-dining operations that suffered a decline in comp sales during the first quarter. The segment has struggled to win traffic from fast-casual operations and heavily discounting quick-service giants like McDonald’s and Burger King.