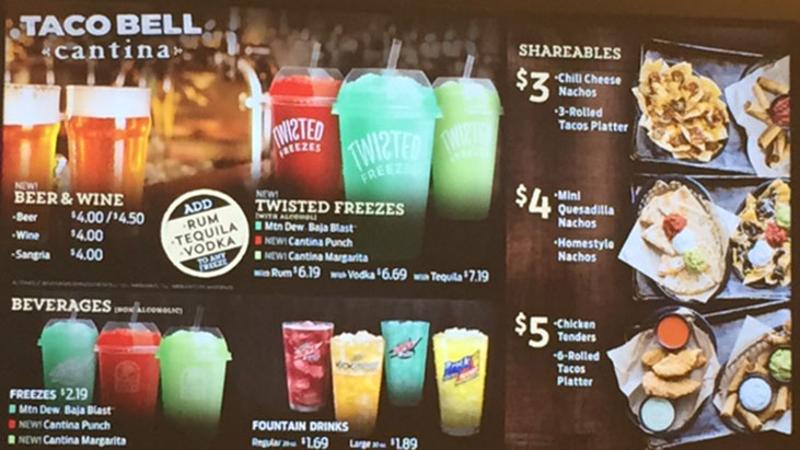 Let me start with a disclaimer: I am not Taco Bell’s core customer. The last time I entered the place was to watch a bunch of teenage boys scarf down a lot of food for a little money. My son and his friends, all now around age 30, didn’t yet have their driver’s licenses and were craving tacos. Some years later, I now was eager to see how the chain had evolved with its new “upscale” urban concept, Taco Bell Cantina, which opened in Chicago in October.

This Taco Bell looks and feels different as soon as you walk in the door. The décor is kind of industrial chic, with blond wood tables and apple green chairs, more subdued non-fluorescent lighting, a large, arty mural on the wall and two big-screen TVs broadcasting sports. But probably the biggest draw for the millennial crowd it’s aiming to attract is alcohol.

Although the boozy Taco Bell doesn’t have a bar, customers can step up to the counter and order beer, wine and Twisted Freezes—icy blended drinks that can be mixed with a shot of rum, vodka or tequila.

My drinking buddy that night was Sara Stewart, Restaurant Business’ millennial art director and a big fan of both Taco Bell and cocktails. So the Twisted Freezes it was; Cantina Punch with rum ($6.19) for Sara and a Cantina Margarita for me, with tequila of course ($7.19, as tequila is the most expensive spirit). The ice-cold slushy drink gave me an immediate brain freeze, and combined with its super sweetness, made it hard to taste the alcohol at first. But as we sipped, the cocktails began to pack a wallop. I can see how the Cosmopolitan-loving set could down a couple of these without a problem—especially if they order some food to absorb the alcohol.

Which gets us to the Cantina’s bar snacks. Although many of Taco Bell’s regular items are available here, there’s a separate Shareables menu board. Among the selections are Chili Cheese Nachos, Rolled Tacos and Mini Quesadillas, served with an oomph of style in baskets. The items, priced at $3, $4 and $5, are Taco Bell’s attempt at tapas, but they fall a little short. None were as tasty as the multi-textured Crunch Wrap we sampled from the regular menu.

I’m not a wine snob, but the Cantina’s choices in that category were kind of lame. There were airline-size bottles of merlot and pinot grigio, as well as red and white in a “wine stack” of 4-ounce glasses covered with plastic wrap, ready to unseal and drink; all were $4.

But the beer selection, though limited, was above par. Both Dos Equis and Fat Tire are on draught and go for $4 and $4.50. The employee who acts as “bartender” told us that customers say this is the cheapest place to get Dos Equis in the hip Chicago neighborhood of Wicker Park, where the Cantina is located.

The customers around us were mostly drinking beer and eating their Taco Bell faves—not the Shareables. But it was 7:30 on a Thursday night. Maybe the midnight crowd is a little more adventurous or in party mode. I asked one of the employees if it’s gets busier later or on other nights, and he told us weekend evenings saw more action, especially in the later hours.

Taco Bell regulars who live in urban centers will no doubt embrace the Cantina for late-night boozing and cheap eats. That’s the demographic the chain is targeting, according to the media hype. Sara said she would go back. As for me, I would probably meander over to Big Star, another Wicker Park Mexican destination, for a fresh, handcrafted margarita and a carnitas taco.