Back in 1995, near the ski slopes of Mount Shasta, Bruce Dean and Bob Manley scraped up $30,000 to open a restaurant. Adding in some credit from landlord and vendors, they remodeled a defunct eatery into the Black Bear Diner, a family restaurant with an outdoorsy atmosphere. Recalls Dean, “It was the only thing we could afford.” 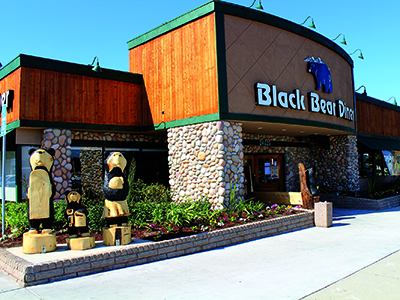 Almost two decades later, they’ve turned that business model into a real estate honey jar. After 2008, while many chains were going into hibernation, Redding, California-based Black Bear was doubling in size. Of 60 units in eight states, all but a handful are conversions of shuttered restaurants.

“The money to be made is in conversions, without such a high upfront cost,” says Dean. “You name it, we’ve converted it.” The list includes former Sambo’s, Lyon’s, Baker’s Square, Bob’s Big Boys and Marie Callender’s. His key strategies for mining gold out of other chains’ busts:

Low investment, quick return. With average checks of $10.80, says Dean, “We have to keep the economics right. It doesn’t give us the ability to spend extraordinary amounts for a location.”

A typical conversion runs between $400,000 and $750,000—versus $3 million to build a restaurant the same size. Those amounts are small enough to make lenders friendly, but most franchisees pay out of their own pockets.

They make it back in three years, doing average unit volumes of $2.3 million. “Our job,” says Dean, “is to help our franchise operators to get as quick a return on investment as they can.”

Loot from landlords. Another cost-cutter is to seek $100,000 to $250,000 in tenant improvement money and free rent. Over time, the restaurant pays some of it back, in the form of higher rent.

While recession ravaged California, landlords were desperate to make deals. As the markets recover, Dean pitches them his track record. “Both our company and franchised units have a history of paying lease payments and investing in buildings. From a landlord’s perspective, we give them security.”

Fixer-uppers. Black Bear looks for bargains on buildings that have been badly maintained, says Dean. “When we go in, we have a demolition party for the first 30 days. We tear everything out of them, down to the studs and load-bearing walls.”

Flexible design. There’s no standard layout for a Black Bear Diner. It can fit a few common design elements into many different spaces of 5,000 to 7,500 square feet. “We can take these different structures and throw our elements on the outside and people can recognize it as a Black Bear,” says Dean. “We’re not cookie-cutter.”

On the outside, those elements include river rock siding, cedar timbers and green metal roofs. On the inside, they include a lunch counter with a jukebox and a pass-through window to the kitchen. They also feature bevies of bears, from interior murals to chainsaw sculptures eight feet tall.

Prime the pipeline. To kickstart franchise sales, back in 2008, the company self-funded two units. Says Dean, “We had to show our franchise community that even though the economy was in the tank, there was money to be made and sales to be done.” Franchise units now total 40, adding five to seven each year.

Retool for recovery. As markets tighten on the West Coast, Black Bear’s expanding into less expensive states like Utah and Idaho. Back home in California, it’s cultivating closer ties with real estate brokers.

“Traditionally, we’d sit and have brokers send us notices of vacancies,” says Dean. “Now, we have to do a better job aligning ourselves with brokers and knowing what’s going to become available, keeping track of those businesses that might be struggling and trying to get in front of them.”