We … well, I … just geeked out for two hours, tracking in real time CNET’s live blogging of the Apple Live event. As expected, Apple announced the upcoming release of two new iPhones and the much-anticipated Apple Watch, which comes out in early 2015 (just in time for my birthday, if anyone’s keeping track). 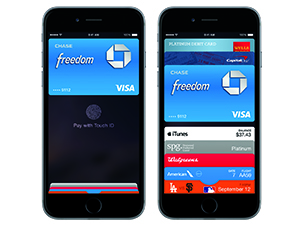 But, in addition to the hardware, Apple announced something that could be a game changer for the restaurant industry and retailers: Apple Pay. “Apple is about to enter an entirely new category of service,” the company blogged while CEO Tim Cook was sharing the news on stage at the event in Cupertino, Calif. “The vision is to replace the wallet. And the starting point is payments.”

While acknowledging that previous e-wallet platforms had underwhelmed, Apple couched the news of Apple Pay—which will debut in the U.S. next month—in terms of a holistic approach to payments. “Apple Pay combines seamlessly integrated hardware, software and services,” the company promises. Basically, consumers will be able to “add” cards (credit cards, loyalty cards, etc.) to Apple Pay, and then pay for transactions at stores and restaurants just with the push of a button—the Touch ID button, to be exact. That’s the same Touch ID button that rolled out in the previous iteration of the iPhone and let people use their fingerprint as the passcode to unlock their phone. No more fishing through your wallet or purse for a credit card.

The Apple Pay transaction is secure, the company says, because card numbers are never actually stored or shared on the Apple device. Instead, “Each transaction is authorized with a one-time unique number … It generates a dynamic security code, replacing the static security code from the back of your card.” And if the phone is ever lost or stolen, owners can suspend payments remotely without having to cancel their actual plastic credit cards.

“How can they do that,” asked my co-worker sitting next to me and enduring my outbursts every two minutes as some new announcement streamed from the press conference. The concept hinges on partnerships Apple already has forged with three big payment networks (American Express, MasterCard and Visa), top credit-card issuing banks, including Chase, USAA, Bank of America and Wells Fargo, that handle 83 percent of the credit-card purchase volume and more than 220,000 merchants.

Among those merchants adopting Apple Pay out of the gate are Subway, Panera and McDonald’s, with the burger chain outfitting its drive-thrus to allow the payment option. TechCrunch reports Starbucks also is a partner. And online-reservations provider OpenTable will be incorporating Apple Pay into its app, so diners seemingly can settle their bill without waiting for a server to bring a paper receipt.

Apple’s e-wallet will work with the new iPhone 6 and iPhone 6 Plus as well as the Apple Watch.

Whether Apple’s version of electronic payments really will catch on remains to be seen. But as Gizmodo writes, “It’s important to note that Apple Pay is important because Apple is a huge phone maker … and because they’ve implemented mobile payment technology in a large-scale way, not because this is some marvelous new technology. Apple has been lagging behind here. But if Apple Pay is as simple to use as it looks, this could still be the system that takes mobile payment mainstream."