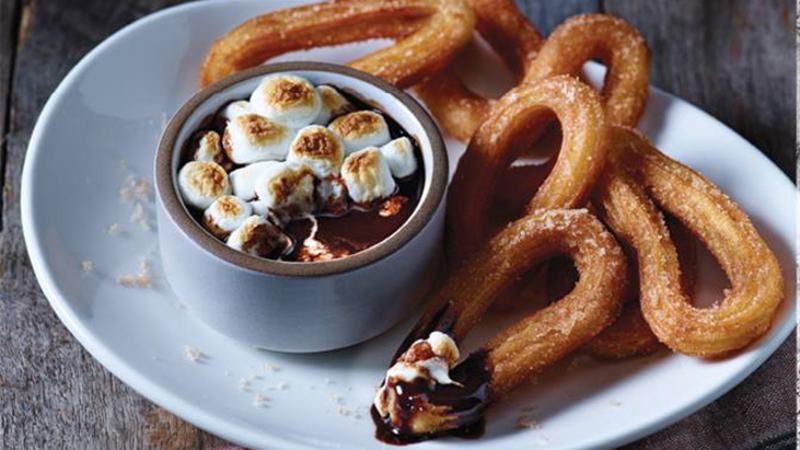 We’ve all seen it, or maybe we’ve been there—that table where two or four people order one dessert, but they ask for many forks. Operators have taken these types of requests to heart by bringing a new dessert-size spectrum to their menus, with two-bite treats on one side and platter-sized creations on the other. In the middle are a host of snacks, minis and portables bringing desserts to new day parts.

Traditionally, desserts have been the final course of dinner, but as snacking patterns have emerged, and as bakery-cafes and coffee houses have created new mini-meal occasions, desserts are having a renaissance. Classic treats are being retooled for portability, and new sweets are emerging to fit new cravings.

“Dessert is not just about the end of a meal. It’s a snack occasion, and its own day part,” says Brian Darr, who works in custom research at Chicago-based research firm Datassential. “Keeping people interested in it with new tastes and portability will build this momentum.”

A recent Datassential dessert report finds that 57 percent of people are interested in mini desserts, and certain snacking patterns are emerging: 28 percent of those surveyed said they eat morning snacks; 45 percent have an afternoon snack and 46 percent indulge in late-night snacking. Cookies, brownies and bars are enjoyed most often as afternoon or late-night snacks.

Darr sees potential in operators offering other minis; items such as cannoli, tarts, cupcakes, brownie bites and seasonal, hand-held pies are a way to keep customers interested in sweet snacks.

While snacking has been a great boost for desserts, the improved economy is also helping dessert’s more traditional role. Darr notes that with a better economic outlook, people are less like to keeping shaving off the extras of a restaurant meal, such as desserts or treats.

One size does not fit all

“We’ve noticed two types of dessert eaters: those who want to share with the table for a few bites, or those who want their own personal dessert,” says Chef Jessica James of Applebee’s, where dessert “shooters” have been a popular feature for years.

“We’ve seen from the appetizer menu that people like to share food and interact with dips and sauces,” James notes. “The bigger pretzel portion is a croquembouche-inspired tower of salted pretzels and extras that people pass and share.”

To that end, a brand-new promotion at Applebee’s capitalizes on sharing appeal, with bar classics served in a variety of sizes and combinations “to serve any appetite or table dynamic.” Most of the chain’s bar snacks, shareables and pub plates are savory items, but the s’mores churros, served with marshmallow and chocolate sauce, are a part of the menu as well.

“Technically, it’s not a sweet-salty dish, but churro dough isn’t overly sweet, so this appeals to people who want just a small dose of sweetness and fits well with our new promotion,” says James.

Shareable churros and sopapillas also work with another sizing issue: size of stomach. “One of the challenges we face is that our margaritas are so good, and we have so many that are sweet, that some guests see their drink as their dessert,” says Dan Lederer, who wears many hats at Margarita’s, a regional Mexican concept in New England. “Getting the guest who just had chips and salsa, a margarita, an order of nachos and a fajita to go for that one sweet ending is hard. That’s where encouraging guests to share desserts and to really have our servers behind these items can really make an impact.”

Datassential’s Darr reports that big shareables, such dessert pizzas and sweet flatbreads, are emerging but are not widespread. James also reports that Applebee’s is looking into larger desserts that are shareable, but not bite-sized, as well. For now, James feels like bite-sized sharing has cracked the size dessert size code.

“People like smaller plates because they can try a greater variety of tastes at a lower commitment,” James says. “This way of eating is fun, social and interactive. The more we can bring this to the dessert menu, the better.”