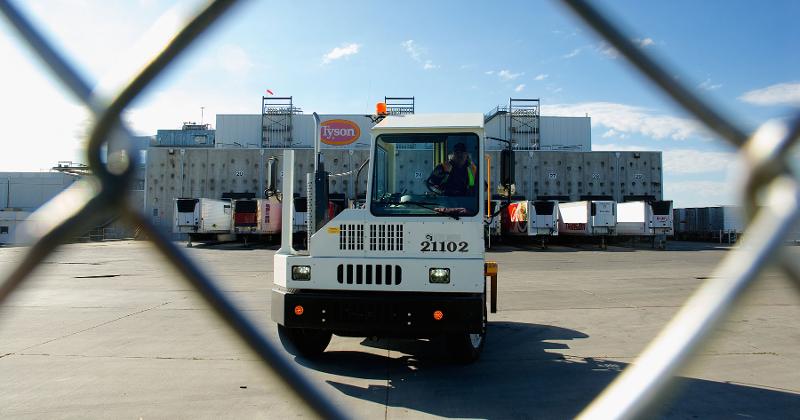 Television news shows keep zooming in on depleted supermarket meat cases, and the grim situation seems to be getting worse. Tyson, Smithfield and JBS have all closed processing plants in several states due to the spread of the coronavirus among employees. Kinks in this link of the supply chain are reducing the amount of pork, beef and, lately, chicken, getting from producers to retail markets.

This past Sunday, Tyson Foods Inc. took out an ad in The New York Times warning that “the food supply chain is breaking.” Chairman of the Board John Tyson wrote: “As pork, beef and chicken plants are being forced to close for short periods of time, millions of pounds of meat will disappear from the supply chain … and there will be limited supply of our products in grocery stores until we are able to reopen our facilities that are currently closed.” Tyson also noted that “millions of animals—chickens, pigs and cattle—will be depopulated because of the closure of our processing facilities.” Fewer fully operating plants can lead to a potential backup of animals at farms and ranches.

Currently, that dire news is not having a large impact on foodservice, as the demand has been low since March, when a huge number of restaurants, sports arenas, colleges and schools were forced to close. But now that more states are allowing restaurants and other food operations to reopen, will they have problems purchasing meat?

“The demand won’t be that great in the short term,” predicts Aleks Schaefer, assistant professor of agricultural, food and resource economics at Michigan State University. “And once foodservice demand increases, the redirection of the supply chain from retail to foodservice will be smoother than it was back in March when suppliers weren’t expecting it.”

Pork processors were the first to close plants, and many currently are operating at reduced capacity, as employees call in sick or stay home to reduce the risk of coronavirus contamination. Although there are a record number of pigs in production, “disruptions in the packing plants is causing a shortage of pork [at retail] that can continue for six to 12 months,” says Angie Krieger, vice president of domestic marketing for the National Pork Board.

Foodservice operators can try to buck that issue by opting for bone-in pork products. “There will be fewer boneless cuts because those are the ones that are further processed,” says Krieger. But there’s lots of bacon and plenty of deli meats in cold storage or freezers, ready to flow into the supply chain. The huge drop in breakfast and lunch foodservice business is responsible for the glut.

Krieger’s advice is for operators to plan early and think about what consumers may want when stay-at-home orders are lifted and they can again purchase food from restaurants. She predicts that takeout and meal kits will remain popular with cautious customers. “People will still be looking for meal solutions, so why not offer a pound of bacon as a grocery item with a prepared dinner order or meal kit?” she says.

A look at the beef supply

Beef is not having as serious a supply chain issue as pork, says Colin Woodall, CEO of the National Cattlemen’s Beef Association. “There’s a slowdown on the beef side and a little backup with live cattle, but for the most part, the industry is keeping beef supply flowing at reasonable levels,” he says.

The cattle production cycle is also at its two-year peak in 2020, so there is enough long-term supply. Plus, it takes longer for cattle to diminish than it does pigs. Although there have been plant closures and processors working below capacity, “We don’t anticipate a beef shortage a few months down the road,” says Woodall. Right now, the pickings might be slimmer in supermarket meat cases, but as summer gets into full gear, the beef industry ramps up production for grilling season, starting at the end of May.

However, Clint Walenciak, director of packing with Certified Angus Beef, points out that inventories at foodservice are extremely thin at the moment, and the restocking process could put a short-term strain on supply as product gets redirected from retail. “That evolution will take time as people begin to readapt to normalcy,” he says.

With governors just beginning to issue rulings allowing restaurants to reopen, and each state proceeding at a different pace, meat demand will rise pretty slowly. That gives foodservice distributors a chance to restock supplies and get product out to restaurant customers as needed.

“There may be delays or hiccups within the supply chain as all states and communities open for business at varying degrees, but I believe we will continue to see our meat industry … work through them quickly,” says Sara Scott, vice president of foodservice for Certified Angus Beef. “Keep in mind that traditional steak items—strips, rib-eyes, tenderloins, short loins and sirloins—have not matched the demand at retail they previously had within the restaurant customer base.”

Chickens take only seven weeks to grow to processing weight, so supply can be replenished more quickly. The industry also is not experiencing as many plant shutdowns as beef and pork.

“There have been no long-term closures of chicken plants. Mostly 24-hour shutdowns for a deep cleaning, then they reopen again,” says Tom Super, senior vice president of communications for the National Chicken Council. “The vast majority of chicken plants are up and running, but not at full capacity. There’s more absenteeism from sickness or illness in the family and fewer workers due to social distancing. Plants have installed plastic dividers between workstations.”

About 50% of the chicken produced in the U.S. normally goes into foodservice—mostly restaurants, sports venues and colleges. One reason for the more limited supply currently in supermarkets is that some plants are set up for foodservice, processing mostly boneless and bone-in wings and other parts in high demand. “It’s hard for them to switch to retail,” says Super. “They don’t want to spend $3 million retrofitting the plant.”

Right now, there are about 1 billion pounds of chicken in cold storage, destined either for foodservice or export—another channel that has been restricted. Asian countries typically buy a lot of dark meat, “but it’s not easy to divvy up a 40-pound box of leg quarters into smaller retail packages,” says Super. All these factors are contributing to possible chicken shortages in the meat case.

The chicken industry originally forecast a 3% increase in supply this year, but that will likely go down, Super predicts.

Supply chain analyst Brandon Hernandez, co-founder of Whole Brain Consulting, said there may be short-term hiccups, but “there are freezers full of meat that have to empty out before you see major long-term shortages. We were bullish on meat supply even after the plant closures.”

Despite this optimism and the fact that workers were getting sick, President Trump issued an executive order, two days after the Tyson ad appeared, to keep all meat packing plants open.

“It provided solace and assured the American people that the government was taking the supply chain seriously and there would be food on the table,” said Hernandez, “but there were gaps in the order regarding safety protocols.”

Meanwhile, the CDC and OSHA issued additional guidelines for processing facilities to follow during the pandemic. While these fill some of the gaps, there continues to be concern among meatpacking employees. During the last week in April, Tyson issued a statement that the company would be enhancing health screening measures, increasing short-term disability benefits and doubling bonuses for front-line workers and truckers during the COVID-19 crisis. Tyson will also go beyond temperature checks, screening workers for symptoms such as coughing and shortness of breath, and will require and provide surgical-style face coverings. And a team member at each plant will be appointed to enforce social distancing.

While supply seems to be holding steady, where the demand will be this fall is still pretty much a crapshoot. “The virus is controlling the timeline,” says Trey Malone, assistant professor and extension economist at Michigan State University. “The biggest fear is a double peak of the virus later in the year. That can have a much bigger impact on supply.”

Malone mentioned another protein that may present sourcing challenges: seafood. “With restaurants closed, 70% to 80% of the demand for aquaculture is gone.”