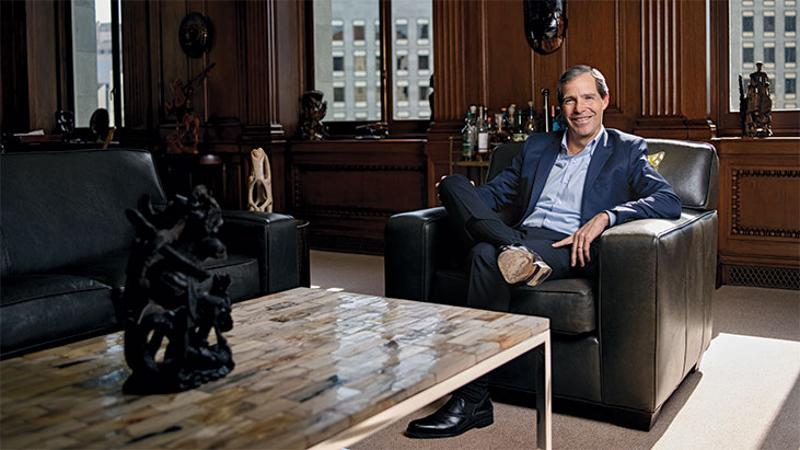 If you’re unfamiliar with the name Greg Flynn, you’re almost certainly not a part of Applebee’s (he operates roughly a quarter of the chain) or Panera Bread (last year he became the first franchisee to join the system in nearly a decade).

It’s an even safer bet you’re not a student of franchising and how radically that path to success has changed since the days McDonald’s Ray Kroc and Subway’s Fred DeLuca were peddling one restaurant at a time. Those legends were the storybook examples of how fortunes and empires were built in the industry’s simpler days, when franchisors were the kings and franchisees hoped for a piece of the fiefdom.

What they set in motion has enabled Flynn, a franchisee, to build his own kingdom, one likely to be envied by both franchisors and franchisees alike. Although his Flynn Restaurant Group does not own any brand, it runs a big enough piece of three major ones to enjoy $1.7 billion in annual revenues—or more than the intake of Applebee’s parent company, and not far behind the revenues of Panera’s franchisor. If all 729 restaurants under his charge were converted to a concept called Flynn’s, it would rank as the industry’s 37th largest chain in systemwide sales, neck and neck with The Cheesecake Factory.

But that’s not about to happen. “I like being a franchisee,” Flynn says, and there’s no doubt he’s good at it.

So good, in fact, that FRG has emerged as a model of the modern-day franchise—diversified, well-capitalized, sophisticated in its growth strategy, deep in talent, definitely large in scale yet still hyperfocused on local-market dynamics. Through what Flynn describes as a form of federalism, the group functions as a holding company of local operations nurtured with home-office support—a structure not unlike the traditional franchisor-franchisee relationship.

That blend of big-business sensibilities and the entrepreneurial underpinnings of restaurant franchising is why Flynn was chosen by the editors of Restaurant Business as the 2016 Restaurant Leader of the Year.

If anyone in the trade wants to know where the franchise side of the business is headed, they need merely look toward the 51-year-old and his organization. Among the telltale indicators they’ll see:

By design, Flynn has diversified FRG’s opportunities and risks by building a significant presence in all three major industry segments: quick service (201 Taco Bells), fast casual (47 Paneras, with six more under development) and full service (481 Applebee’s).  In each instance, he carefully chose the brands, then went after an acquisition opportunity.

The company says it has strong local connections across 28 states, literally from coast to coast, a decentralization that lets field management hatch ideas instead of having one-size-fits-all notions imposed from above.

FRG employs 38,000 people, led by a management team that includes Flynn’s original partner in the business, others who have been with him for years and longtime veterans of the company’s brands. Flynn says he almost always keeps the management of an acquisition, because it intimately knows the operations.

A marked difference of FRG, according to Flynn, is the autonomy it grants hands-on operators to innovate and stretch. “Most people are more capable than they’ve ever been asked to be,” he says. “Our whole approach is to push authority down the line.”

Similarly, Flynn runs FRG as what he describes as a corporate republic. The company is actually a collection of three brand-focused operations: Apple American (its Applebee’s business), Bell American (Taco Bell) and Pan American (Panera). The management of each is given wide latitude to handle matters pertinent to that operation, or “state,” just as California or New York handles most local governance issues. But they have to keep within larger stipulations, “just the way there are federal laws,” says Flynn.

Backing typical of a big corporation

Flynn was one of the first franchisees to seek capital from private-equity funds. Two of the equity investors, Goldman Sachs and Weston Presidio, sold slightly more than 50 percent of FRG last year to the Ontario Teachers’ Pension Plan for a reported $300 million.

While at Stanford, one of Flynn’s assignments was writing an offering memo for private-equity investors in a real estate fund. The classroom exercise led to the formation in 1994 of Flynn Properties, a real estate investment firm.

That, in turn, led Flynn to invest in a San Francisco limited-service restaurant hatched by a friend from Stanford. The venture was called World Wrapps, a concept built on wraps when that menu item still was a novelty. The success was so phenomenal that Flynn decided to switch from passive investor to co-operator and secured rights to develop 14 units in Seattle.

“That was the tipping point when I really became a restaurateur,” he recalls. He not only learned the business, but the importance of surrounding himself with people who knew it better than he did.

He would exit that investment, but started looking around at what other opportunities were available to him in the restaurant business. That led to the purchase of eight Applebee’s restaurants in Seattle from franchisee Don Strang. Flynn would subsequently buy 61 more stores from the Ohio-based restaurateur, financing the deal through Goldman Sachs’ private-equity fund.

Those early days solidified the management philosophy that started forming back at World Wrapps. Dan Krebsbach, a member of Strang’s organization, had some things he wanted to try in the Seattle stores. “He said to me, ‘It’s different out here. I have all these things I want to try,’” Flynn recalls. “I said, ‘Give it a shot.’”

Weekly sales shot up to $60,000, Krebsbach ended up as president of the Applebee’s operation and Flynn had a management epiphany. “I made a conscious decision to empower our operators,” he says. In subsequent acquisitions, “rarely have we been forced to go outside of our organization.”

More purchases of Applebee’s units would follow as the economic downturn walloped casual dining and fellow operators chose to exit. Flynn diversified into the quick-service market in 2012 by buying 76 Taco Bells. More deals within that system would follow.

He poked a toe into the fast-casual market last year with the purchase of two Panera franchises, the culmination of what Flynn describes as a long quest to enter that arena.

What’s next? Definitely not an IPO, says Flynn. “The only reason you’d do an IPO is if you need capital, you want better multiples or valuations or you need more liquidity,” he explains. “We don’t need any of those.”

Instead, he intends to remain a franchisee. “Ninety percent of it is operating good restaurants, and I like that,” he says. So do his investors: FRG has logged 16 years of 33 percent compound growth.

“I never imagined we’d get to where we are now,” he continues. “But I also thought the opportunity was limitless.

“And I still think that.”