At ages 22 and 25, respectively, Holley Hood and Hayden Straus beam with the enthusiasm of a young couple embarking on something big. Even they seem to struggle with grasping just how big. After serving as managers in the Jersey Mike’s sandwich chain, they are visiting the sub specialist’s headquarters on a Thursday morning, the VIP guests of CEO Peter Cancro, for an orientation on the support services available to the operation’s 450 franchisees. It’s a group Hood and Straus are about to join because Cancro has decided to give them a restaurant.

Indeed, the brand’s principal owner and lone chief in its 45-year history plans to similarly set up 24 more managers from the system in 2020 as new owners. “We hope to get the number up to 100 a year,” Cancro explains during a rare interview in Jersey Mike’s Jersey Shore offices, smack-dab in the middle of Bruce Springsteen country. “We handle the books, we teach and train, we handle everything.”

That includes co-signing the lease and loan agreements for the new stores, which cost about $375,000 to build. Cancro even plans to drive with Hood and Straus around Wisconsin so they can find a location where the couple intends to live. “I’m pretty good at finding sites,” Cancro says, without acknowledging the understatement. Jersey Mike’s currently stands at about 1,700 locations and is expanding at a rate of over 10% a year. The home office expects systemwide sales to top $2 billion with unit No. 2,000.

By that time, Jersey Mike’s might well be enjoying the benefits from a $150 million investment in franchisees’ stores. The franchisor intends to spend $75,000 on each of its field partners’ units for a renovation that includes new technology, an updated look and a lightly tweaked menu. The franchisees pay nothing.

The home office expects the program to boost each restaurant’s sales by 10%. Yet what seems to amp up Cancro’s excitement—even more than a taunt from Straus that Hood can slice cold cuts faster than the CEO—is the expected impact on expansion. With the increased cash flow, current franchisees can build more stores. Already, existing operators are opening 80% of the chain’s new locations.

“This is a new beginning—this kind of relaunches the company like nothing else,” the New Jersey native says of the $150 million investment. “Instead of waiting three, four, five years, we know we can do it right away. We’ll shut down on a Monday night and reopen on a Friday. Owners were in tears when we announced it.”

Cancro acknowledges that few chains have invested on that scale in the assets of its franchisees. No mention seems necessary to underscore the uniqueness of giving restaurants to promising managers (the restaurants that lose their GMs are compensated 3% of sales to offset any negative impact on their business). Ditto for Jersey Mike’s annual Day of Giving, when all of the chain’s proceeds for a day’s operation—sales, not profits—are donated to local charities.

Last year, $7.3 million was raised during the Day of Giving. It falls during March, known in Jersey Mike’s world as the Month of Giving.

“This is a new beginning—this kind of relaunches the company like nothing else. … Owners were in tears when we announced it.” —Peter Cancro on Jersey Mike’s $150 million investment in franchisees’ stores

The unorthodox ways of sharing the brand’s success are a function of Cancro being the company’s hands-on owner, and of having a long memory. The restaurants presented to managers, for instance, are technically known as Coach Rod Smith Awards. The program is named after Cancro’s Pop Warner football coach, Rod Smith, a local banker who loaned the young entrepreneur $125,000 to buy the prototype of Jersey Mike’s, a 1,200-square-foot sub shop called Mike’s, in 1975. Cancro was 17 at the time.

He had worked at Mike’s since he was 14, a job he got through his brother, John. “I showed up at 14, and my voice mattered,” Cancro says.

Working in the restaurant three years later, he overhead the owner, the third proprietor since the place had opened, comment to an acquaintance that he was going to sell the place.

“No one really knew it was for sale,” Cancro recalls. “I thought I’d be going to Florida for spring break, something I’d missed because I was always working there.”

Cancro mentioned what he’d heard to his mother that evening. She startled him by suggesting he buy it.

Scoffing at the notion, Cancro headed upstairs to his room. “It took one flight of stairs for the light to go off,” he said.

Learning the sub shop would cost $125,000, Cancro began fundraising by going door to door in his hometown of Point Pleasant, a community where everyone knows one another. He had to get the money by the following Monday or someone else would end up with the high-volume operation. (“We were doing 850 breads a day,” he says, referring to how many loaves were turned into sandwiches back then. On a typical day now, “We might do 100.”)

On Friday, three days before Cancro had to put up or shut up, he went to finalize a loan from a local businessperson. But the lender decided he wanted to be a partner, not just a backer, and Cancro balked at giving away the equity.

He now had two days to find $125,000. At 9 p.m. on Sunday, he called Smith, whom he describes as a second father. The banker-coach invited his star player to his house, where he readily signed a loan for the money. Cancro took over as owner at an age when he couldn’t even legally work a slicer in most states.

Left: The storefront of the first Jersey Mike’s, opened in 1956 in Point Pleasant, N.J. Right: Peter Cancro (left) bought the restaurant when he was 17, with the help of a loan from his football coach. (Photographs courtesy of Jersey Mike’s)

Cancro had noticed that out-of-towners visiting Mike’s seaside neighborhood during the summer would stop at the shop when the season was ending to buy sandwiches in bulk and take them home. They viewed the sub sandwich as a Jersey product—what pretzels were to Philadelphia or pizza was to New York City. Cancro played up the connection by tacking “Jersey” to the name of his establishment.

By that time, he’d already been accepted at the University of North Carolina in Chapel Hill, where he intended to play football and study political science. But he dropped those plans to focus on the business. And it went gangbusters.

Indeed, he says, the concept has changed little since those first days. Customers are still greeted by the person at the slicer station, who takes their order and slices it accordingly. Grills were added to accommodate cheesesteaks around 1982 as a nod to the number of guests who hailed from nearby Philadelphia. The chicken and steak varieties now account for about 30% of sales.

“We still need only 10, 12, maybe 14 people per store, so the labor crisis hasn’t really hit us,” he says. Many of the chain’s units are owned and operated by families. Two hundred of the 450 franchisees run only a single store.

Business in New Jersey was brisk in those early days. Cancro kept noticing how many customers would place large orders so they could take some of the wrapped subs back to their hometowns, be they in northern Jersey or California. “We had someone who came in and actually took them to Russia,” he says.

That led to the opening of a second store in 1980. More company units would follow. By 1986, Cancro and his team decided to start franchising, and the Jersey brand became a regional concept.

The operation continued to chug along, prompting Cancro to make some significant changes in the early 1990s. He looked at the possibility of going public and borrowed to fund expansion.

“We were just going and going in 1990,” he recalls. “In 1991, it just stopped for us.” The economy tanked, dragging down sales and forcing the company to trim its payroll. The picture changed in nearly an instant.

But Cancro stuck it out. Today, he proudly notes the staff was rehired, the company stuck with franchising, and things returned to normal. 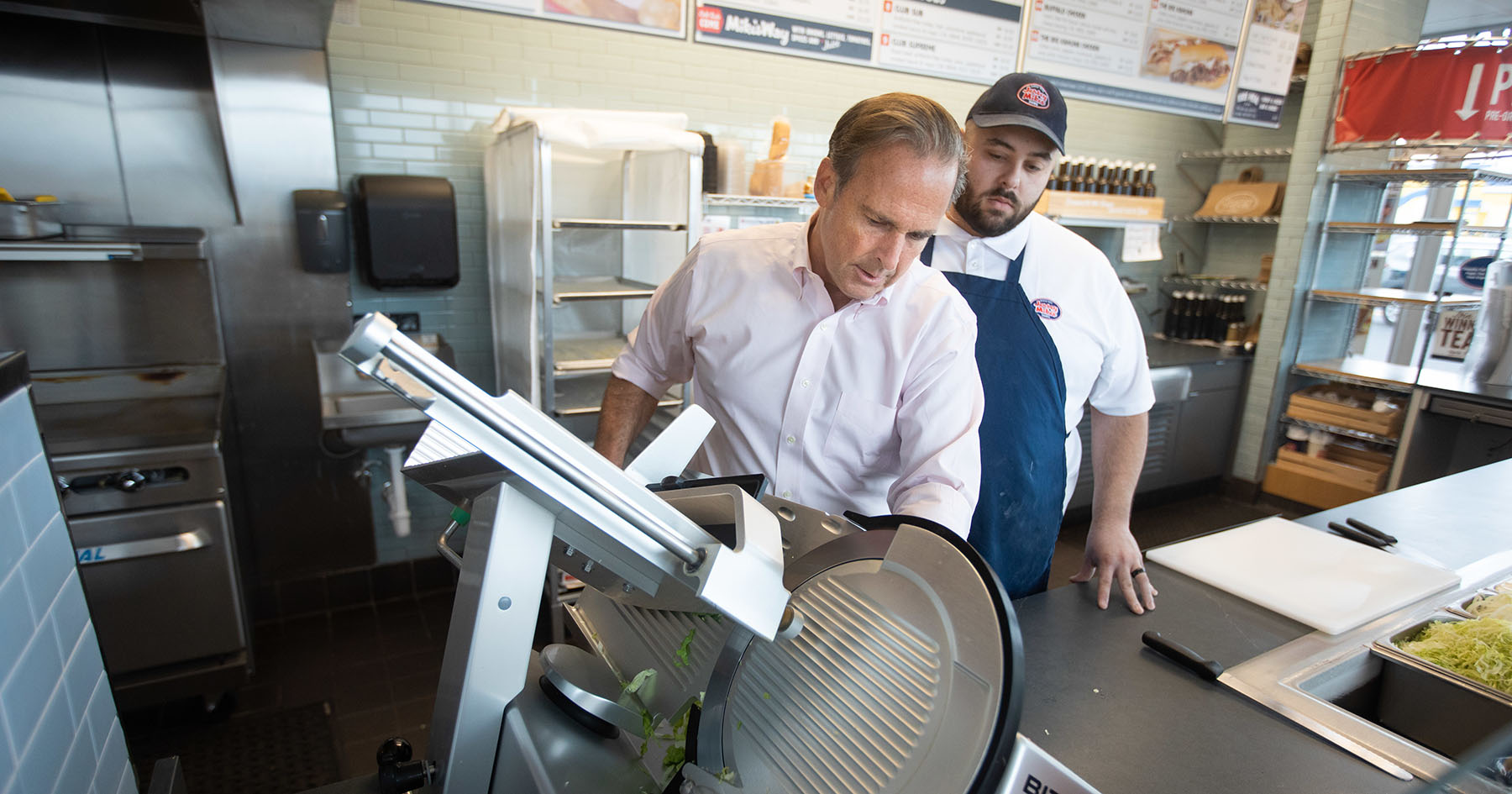 Jersey Mike’s is giving promising managers their own restaurants, a sign of Cancro’s hands-on approach. (Photograph by John O’Boyle)

Today, he says, same-store sales are growing between 4% and 5% a year, and expansion is accelerating. “We added 181 stores last year,” Cancro says. “This year, it might be 225.” All but about 75 of the units currently open are franchised.

Current general managers are ideal candidates to be part of that growth, Cancro says.

Hood and Straus readily voice their agreement. “I started working for Mike’s in high school,” says Hood. Straus joined the chain after working for Domino’s and a host of other businesses. “I needed a job,” he recalls. “I ended up getting so much more.”

He speaks with noticeable enthusiasm about what it will be like to open a store, a process he’ll witness beforehand by attending the launch of sister units. “Doing 300-bread days, I want to see that,” he says. Straus and Hood are serving as corporate employees, working on the other openings, until their store hits the “On” switch on its slicer.

In their exuberance, the couple acknowledges that they would have had to wait a long time before becoming store owners if Cancro hadn’t provided the opportunity. “Obviously he didn’t have to do this,” says Straus. “This is a brand that takes care of its people.”

That’s an aspect of Mike’s culture that won’t change as it grows, Cancro says as he escorts a visitor to his car in the headquarters parking lot. Parked right outside the front door is a black Cadillac limo with a driver waiting to open the door—not for Cancro, but for Hood and Straus.

“I want them to experience New York City, so I hired a driver to take them in and show them around,” Cancro explains after making sure his guest walks away with a turkey sub for later.