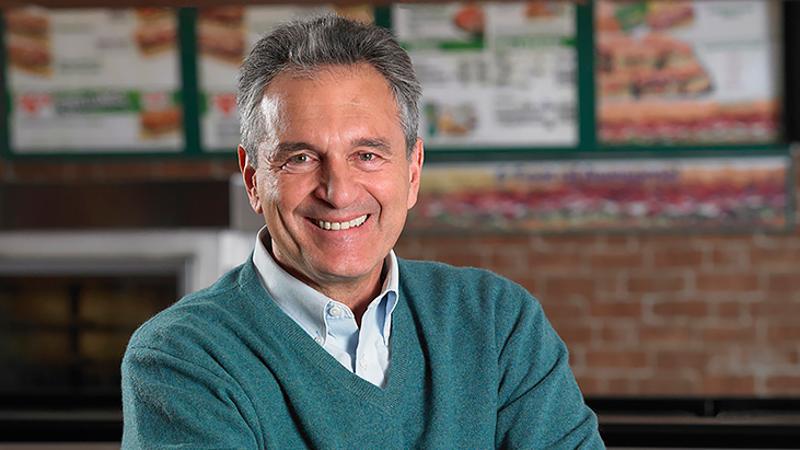 Fred DeLuca never reduced the formula for building the world’s largest restaurant chain into a neat sound bite of a philosophy, but he was quick to cite two pillars to his thinking, be it about business or life.

He couldn’t understand why peers and competitors would sail or play golf when they could put in a few more hours of work. The onetime resident of the Bronx housing projects practically spat out the word “retirement,” and seemed to regard it as a jail sentence—without the cherry of hard labor.

He vowed not to retire until he was 100 years old, and wondered why it would be necessary even then.

“There’s a lot of people, and I find it interesting, they actually look forward to the day that they will retire,” he told The Globe and Mail, a Canadian newspaper, two years ago. “That’s dreadful to me. What would I do when I wake up every day?”

The second leg of his philosophy was a reverence for the lessons learned from running a small business, even though the one he left behind upon his death last month was anything but small.

“I was helped a lot by being a paper boy when I was 13 years old,” DeLuca recalled, seemingly fondly, to an interviewer from Inc. magazine in 2013. “I had to get up and do the job, I had to collect the money, I had to pay the distributor, and doing that on a regular basis instills a discipline that I just wouldn’t have had without having a job like that.”

He never seemed to lose that focus on the fundamentals—an entrepreneur who might’ve built the biggest small business in the industry.

DeLuca never played the corporate game of growing through acquisitions or mergers; Subway, his charge for 50 years, grew one store at a time. There was never any talk of an IPO, nor rumors of a private-equity firm being subjected to a dog-and-pony investment pitch in the boardroom. Indeed, colleagues who visited Subway’s headquarters in the early days said the facility wasn’t exactly something that would sport a boardroom. They likened it to a trailer.

The weightiest debt DeLuca might have incurred in building the business was the $1,000 he borrowed from a family friend, a Ph.D.-bearing nuclear physicist named Peter Buck, to open store No. 1. DeLuca, 17 at the time, was working in a hardware store in hopes of paying for a college education that would make him an M.D.  He lamented that he barely had enough money for lunch, never mind college, and was limited in his midday choice to greasy fast-food burger joints.

In a story that is now industry lore, Buck challenged DeLuca to resolve his financial and nutritional problems in one swoop by opening his own lunch place. In celebration of their assumed success, the Ph.D. and aspiring M.D. called their company Doctor’s Associates.

For the next half-century, DeLuca would be at the helm of the sandwich chain, seeing its transformation from a single (and unprofitable) Pete’s Super Submarines outlet into Subway, a 44,000-unit behemoth with annual sales of $19.8 billion generated by franchises in 110 countries.

DeLuca was still CEO when he succumbed Sept. 14 to leukemia after a two-year battle. He’d relinquished day-to-day control to his sister, Suzanne Greco, less than two months earlier to focus on treatment.

Along the way, DeLuca became one of the wealthiest businessmen in America, though he never revealed how wealthy. Doctor’s Associates remained a private company co-owned by DeLuca and Buck, and the chain never disclosed its CEO’s pay. But a divorce proceeding in the 1980s pegged his compensation as around $35 million a year at the time. Forbes placed him at No. 737 on the 2015 ranking of the world’s billionaires, with a worth of $2.5 billion.

Still, DeLuca didn’t trade his bread knife and squirt bottles of sauce for a scepter and crown. He professed that his favorite part of his beloved job was driving from Point A to Point B with a district manager, visiting every Subway along the way to speak with the franchisees. In July, though direly ill, he attended Subway’s franchisee meeting, bumping fists instead of shaking hands because of his compromised immune system.

DeLuca was active in the International Franchise Association, serving as a mentor and Yoda figure to younger entrepreneurs, but also participating in conference activities as any single-store franchisee might.

The CEOs and chain founders I’ve interviewed tend to fall into two camps: the big thinker who lives in the clouds, dreaming big; and the unit manager who only reluctantly traded his crew uniform for a suit and could still handle the counter during the lunch rush. There was no doubt where DeLuca fell, even though his company never operated its own restaurants after the 1970s.

He could cite nitty-gritty details such as how breakfast sales were trending, yet spoke of the strategic need for Subway to capture more snack and dinnertime business. He was familiar with the need to simplify menu boards long before that topic became the commonplace issue for quick-service restaurants that it is today. He was talking about mobile ordering and one-to-one marketing before those terms even had been coined.

He dismissed assertions that Subway had hit the wall in its domestic expansion, citing sophisticated research that showed the chain had one unit for every 13,000 people in the United States, and could support one for every 10,000.
In many respects, he was a long way from the 13-year-old who learned business by delivering newspapers.

And he never did retire.