The humble online blog has been a staple of many restaurants’ websites for years, so much so that the format has started to look a little stale. Tumblr is a blog site, but it’s a bit different than its elders. You can post photos, text and videos like with any other blog platform, but it also has a secret weapon that is catching the attention of restaurant operators: community. On Tumblr, no blog is an island. 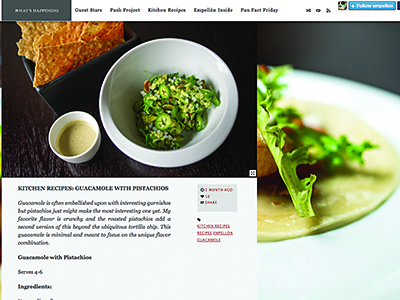 There are 121 million Tumblr blogs and 80 million new posts every day. A good chunk of the audience is the coveted 18 to 34 demographic, though users age 13 to 17 are the most active. The network lives and breathes based on “likes” and “reblogs.” If a Tumblr user really loves that enticing photo of sushi your restaurant put up, she can reblog it and all her followers will see it as well. Your followers get your content delivered directly to a personal feed of information. “You get a huge level of interaction. If you’re doing great content and sharing great content, you very quickly gain a following organically,” says Jen Pelka, Tumblr’s food and beverage evangelist.

David Rodolitz is a partner in New York City’s Empellon, a Mexican restaurant and taqueria. The Empellon Tumblr has only been up and running for a few months, but it has garnered a lot of attention for its eye-catching photos, in-depth chef posts and recipes. Rodolitz explains his attraction to Tumblr: “It’s not just a blogging platform; it’s a social platform. It puts us one step closer to this passionate community of creators and influencers.”

Tumblr has brought in an interesting variety of restaurants. Businesses ranging from food trucks to Wolfgang Puck have taken to sharing on the platform. Momofuku has restaurants in three different countries, but they all come together on Tumblr. “Tumblr is an integral part of our social media strategy. We think of it as a destination for everything happening around the Momofuku universe,” says communications manager Marguerite Mariscal.

When restaurant operators talk about Tumblr, the word “hub” often comes up. Those restaurateurs are using the platform as a place to amalgamate their social media presence into one accessible spot. “We are streamlining the experience online for our guests. They don’t have to go to multiple platforms,” says Rodolitz. The Empellon Tumblr contains images from Instagram, recent Twitter updates and mirrored content from posts put on Facebook.

The visual component of Tumblr is very strong and does well when it comes to attracting an audience. Food photography gets users excited, as do animated gifs, short video animations that are popular online. “We’ve seen a lot of brands and restaurants do well with animated gifs because they’re so catchy and people love sharing them,” says Pelka.

One way to build a Tumblr following is to get involved in the community. Follow other Tumblrs and look for posts involving your restaurant. “Don’t be afraid to reblog. Some of the best content for our restaurant might be coming from fans and customers,” says Mariscal. This approach can help take some of the burden of content creation off your team and connect you more deeply with your customers who are already on the platform.

Tumblr is free to use. There are free themes available to use as templates, or premium themes are available for $49 or less. Restaurants with more sophisticated needs may want to hire an outside Tumblr designer to build a branded site. “Work with a designer and make it look great. Design it so it looks and feels like your restaurant. Make sure it’s an extension of your brand and tells the same story,” says Rodolitz.

Tumblr’s search engine works by using tags that are added to each post. It’s up to you, as the Tumblr user, to stay on top of this task. “Anytime you do a post, I always recommend tagging the restaurant, the name of the city, the type of cuisine, whatever food is being featured and the name of the chef,” says Pelka.

Some of the success of Empellon’s Tumblr can be traced to Rodolitz’s dedication to updating it every day. “Post regularly. Don’t slack. Don’t miss days. If you do that, your following will tune out,” he says. Tumblr may be free to use, but it still requires work to keep it updated with the latest menus, photographs or seasonal specials.

Santa Barbara wine bar Les Marchands has an unusual Tumblr. It consists of black-and-white wine-related photos. There’s no clutter and no confusion to the look of the blog. Les Marchands partner and master sommelier Brian McClintic provides most of the photos from his own iPhone.

The arresting images have led to shares from fans. The inspiration for the wine bar’s Tumblr style is straightforward. “Start with the reason why you were passionate in the first place. Convey that through pictures and through words,” McClintic advises. That passion is translating into the right kind of social attention for the young restaurant. For example, a photo of a bicycle with a wine box on the back has garnered 178 notes from viewers, two months before the restaurant was even scheduled to open.

The social connections and community that have grown up around Tumblr could lend it staying power in a shifting online world. For restaurants, it’s about whether they’re ready to make a commitment to a new platform that may feel more like an unknown quantity compared to Facebook and Twitter. If you have the time to dive in and do it right, it could end up being a worthwhile social media experiment.