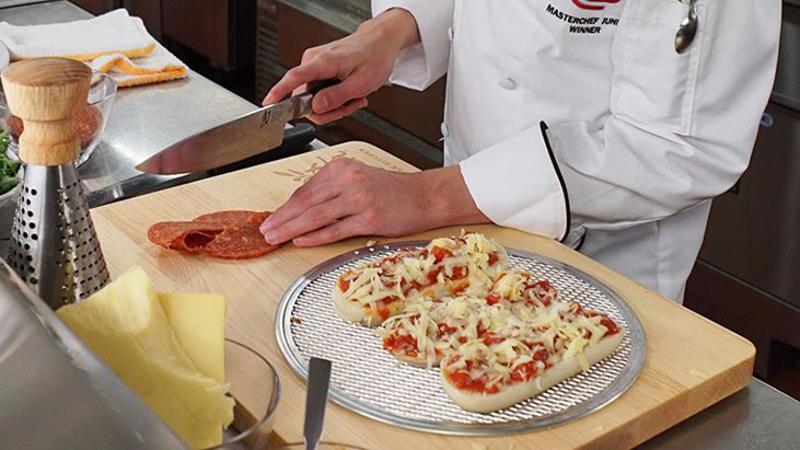 Olive Garden is using its signature breadsticks as the foundation for another new product, an appetizer-sized pepperoni pizza.

The breadstick pizza will be available starting tomorrow, along with a new cheese-stuffed meatball appetizer. Breadsticks also figure into the meatball option, though toasted and served as an accompanying crostini.

Both appetizers are part of a larger promotion that plays off Fox’s MasterChef Junior culinary-competition program. The two new options will be announced on tonight’s show, with an explanation that Olive Garden guests can vote on which of the limited-time offers should be added to the chain’s permanent menu.

We have two new apps inspired by MasterChef Junior's Logan Junior Chef! Catch them tonight on FOX at 8/7c and give the apps a taste during your next visit to find your favorite! (Sponsored)

The winning item will be announced on the Dec. 18 episode of the cooking program.

The voting and availability of the appetizers will run through Dec. 14, Olive Garden said. The winner will be featured on the permanent menu for at least a year, it added.

The new appetizers were developed in collaboration with the winner of last year’s MasterChef Junior competition, Logan Guleff, according to the Darden Restaurants-owned chain. Guleff was known solely by his first name on the show.

One of Olive Garden’s signatures is the chewy breadsticks provided in unlimited quantity to customers as soon as they sit at a table. The breadsticks became ammunition in a fight last year for control of Darden’s board. An investor group seeking to replace all of the sitting directors turned the breadsticks into a symbol of all that had gone wrong with the chain. It alleged that the breadsticks were served in the wrong quantities, resulting in waste and a loss of freshness.

The group succeeded in replacing every one of the chain’s directors with its own representatives. It subsequently appointed a new CEO of Darden, Gene Lee, and began making tweaks here and there.

Among the early initiatives was the launch of chicken parmigiana and meatball sandwiches made with the breadsticks.