John Schnatter is stepping down as CEO of Papa John’s International, the company said on Thursday. Company President Steve Ritchie will replace him, effective Jan. 1. 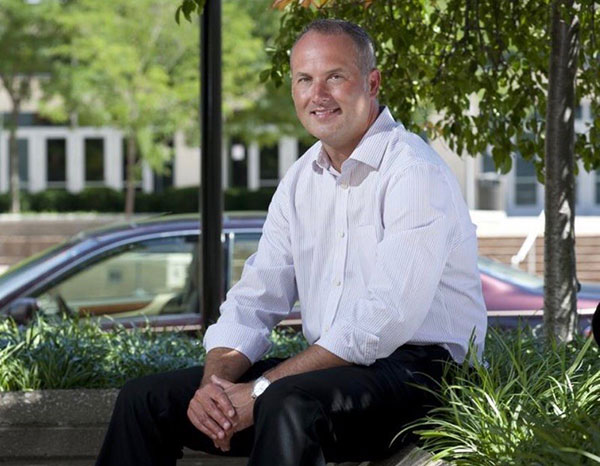 Schnatter will remain the company’s chairman and will “pursue his personal passion for entrepreneurship, leadership, development and education,” the company said.

His replacement is the 43-year-old Ritchie, who started at Papa John’s as a customer service representative in 1996, making $6 per hour. He became a franchisee in 2006 and in 2010 was promoted through the ranks of operations before he was named COO in 2014. He was given the title of president in 2015 and has long been considered Schnatter’s heir apparent.

“I am so proud of Steve—he has excelled at every job he’s ever had at Papa John’s, from being an hourly customer service rep, to a delivery driver, store general manager, director of operations, franchisee and most recently president,” Schnatter said in a statement. “Steve will put the spotlight on our pizza and the most important ingredient, our team members.”

Ritchie’s elevation continues a quiet overhaul in the executive ranks at the Louisville, Ky.-based chain, including Mike Nettles as chief information officer and Brandon Rhoten as chief marketing officer, as the company focuses more attention on its digital strategy.

“At Papa John’s, any opportunity is achievable if you dedicate yourself to putting your best foot forward every day,” Ritchie said in a statement. “I’m certain our future company leaders are delivering pizzas in one of our 5,000 stores around the world right now.”

Papa John’s stock has fallen 60% this year as the chain’s sales have slowed, particularly as rival Domino’s sales continue to surge in the high single digits to low double digits.

The stock is down 13% since Oct. 31, before Schnatter’s comments.

Schnatter has led Papa John’s since he founded the chain in a broom closet in his father’s tavern back in 1984, with equipment he bought after selling his 1971 Camaro. He has since built one of the country’s largest pizza chains and has become one of the restaurant industry’s most recognizable executives thanks to his frequent appearance on the chain’s television ads.

But that fame became a problem last month when he said on an earnings call that “NFL leadership has hurt Papa John’s shareholders” and that protests by players during the national anthem “should have been nipped in the bud a year and a half ago.”

Schnatter’s departure is the latest by a major industry figurehead in 2017. Steve Ells, founder and CEO of Chipotle Mexican Grill, said last month he is stepping down. And Ron Shaich, longtime CEO at Panera Bread, is also leaving that company. Cheryl Bachelder left Popeyes Louisiana Kitchen after its sale to Restaurant Brands International, meanwhile, and Buffalo Wild Wings CEO Sally Smith is retiring at the end of this year.