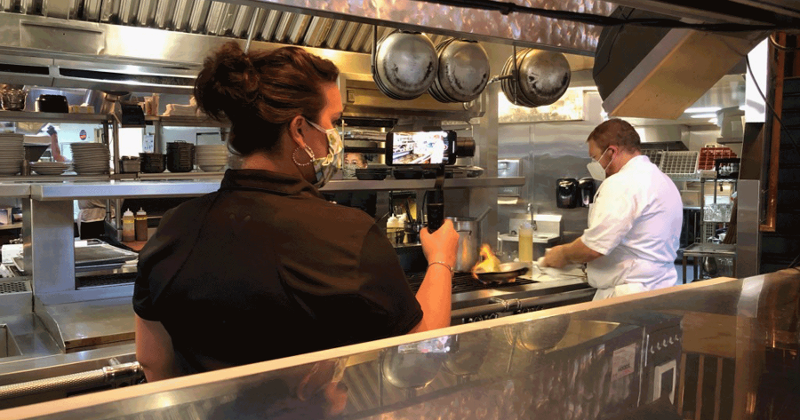 The day she filmed her first video cooking demo from the restaurant kitchen of Prairie Grass Cafe, Chef Sarah Stegner learned her most important lesson: turn off the very loud exhaust hood before you start recording. Especially if it’s live, as most Zoom classes are these days.

As the coronavirus crisis drags on and dine-in business is either limited or non-existent, restaurants are exploring new and different channels to bring in revenue and stay afloat. Like Stegner, several have found that interactive video classes can add to the cash flow. 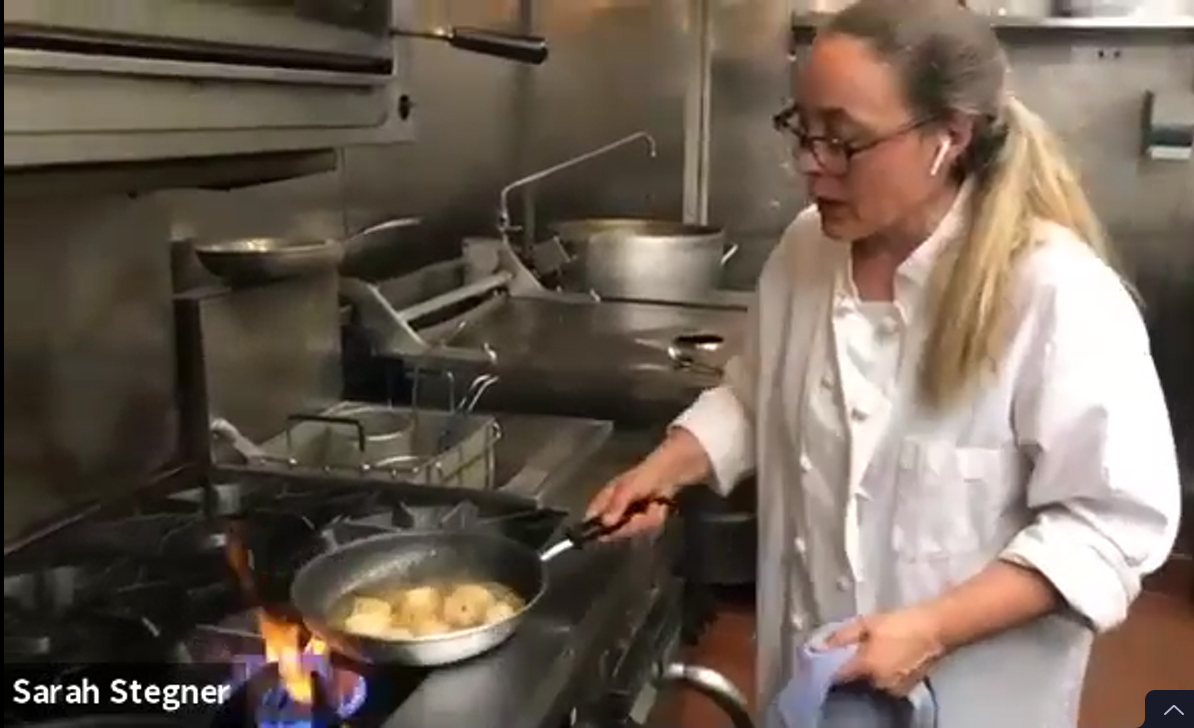 At Northbrook, Ill.-based Prairie Grass Café, the Zoom classes are an outgrowth of the carryout dinner kits Stegner started selling back in the spring. She curates ingredients from local farms and purveyors and includes a recipe so purchasers can cook a restaurant-style meal at home. This encouraged her to start filming the demos for customers who bought the kits, often including the farmers and other producers as part of the session.

The recording doesn’t require a lot of special equipment. Stegner uses an iPad propped on a tripod and a laptop set up near the prep area so she can watch the action as she cooks. And the kitchen lights are sufficient for lighting.

But the filming does require a second team member as “moderator” to control the technology and focus on the action, especially if two people are participating.

“The moderator should have strong cooking skills, but can be remote, directing the chef and farmer [or winemaker] and maintaining the pace of the class. It’s hard for the person doing the demo to keep track of the action,” says Stegner.

Stegner prefers to shoot the videos from her restaurant kitchen, as she knows where every piece of equipment is and can easily access it. But there was a downside—once during the summer, the kitchen got so hot, the iPad crashed, she says.

Another downside—the cooks have to be cleared off the line for the shoot. “I try to shoot around 2 p.m. so it’s not too disruptive to dinner prep and the demos are usually limited to 30 to 40 minutes,” she says, “but I think I would get more participants if we planned the Zoom class closer to dinnertime.” 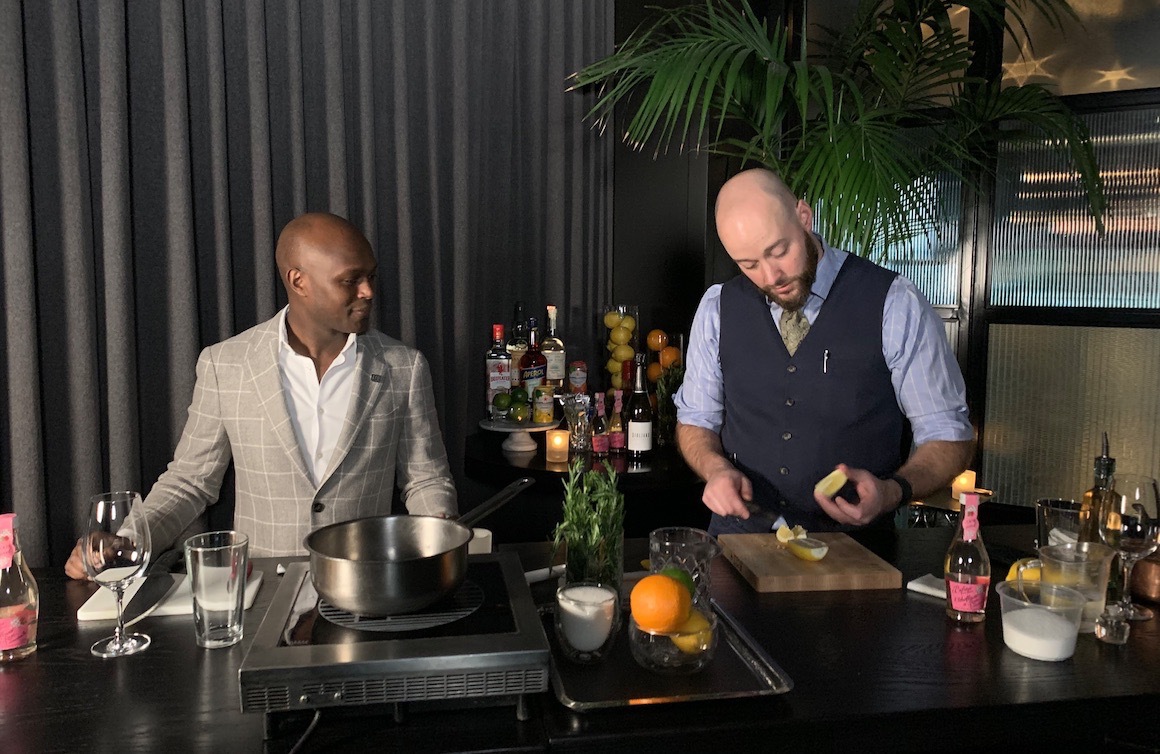 RPM Restaurant Group, part of Lettuce Entertain You Enterprises, opened a large event space above Chicago’s RPM Seafood in fall 2019. Once COVID put the kabosh on weddings, corporate parties and other big events, Catering Manager Samantha Henry pivoted to virtual events back in April, converting a pre-function ballroom into a photo and video studio.

Unlike Prairie Grass Café, Henry can leave the set up permanently and doesn’t have to deal with noisy exhaust fans and disruptions on the line.

To get the studio camera-ready, she brought in induction burners that are set up on a moveable island. “It’s a very quiet space and the equipment is portable,” she says. “We started with large, professional photo-shoot lights but they were difficult to set up so we switched to ring lights, arranging them different combinations as needed.”

RPM uses three different devices for the video—an iPhone 12, iPad and camera—to enable them to take closeups and vary the shots. “We need two people on the cameras plus a laptop next to me to communicate with the chef, sommelier or bartender and stay interactive with the participants,” she says. During the virtual events, she fields question from the viewers through the Zoom chat function.

Carl Sobocinski, founder and president of multi-concept restaurant group Table 301 in Greenville, S.C, also set up video cook-alongs back in April. Pre-pandemic, his chefs hosted live events including corporate team building sessions and fundraisers. To recoup some of that lost income, Sobocinski came up with the idea to shift to virtual events, and companies and groups signed on.

Table 301’s catering team assembles and sends out meal kits to up to 200 participants who join in via Zoom or Facebook Live on the day of the event. A chef leads the attendees through the “class” in one of the restaurants’ kitchens, with another staff member using an iPhone to record.

Although video sessions can be labor intensive at first, once the initial setup is complete, they do go more smoothly, the operators agree. Participants pay anywhere from $30 per person to $100 or more with wine or cocktails, so the restaurants can take in from $800 per session to several thousand, depending on the number of attendees.

Virtual events can reach a far greater number of restaurant customers than live demos, and Zoom is now a routine part of consumers’ lives—both signs that the kitchen as video studio could be here to stay.