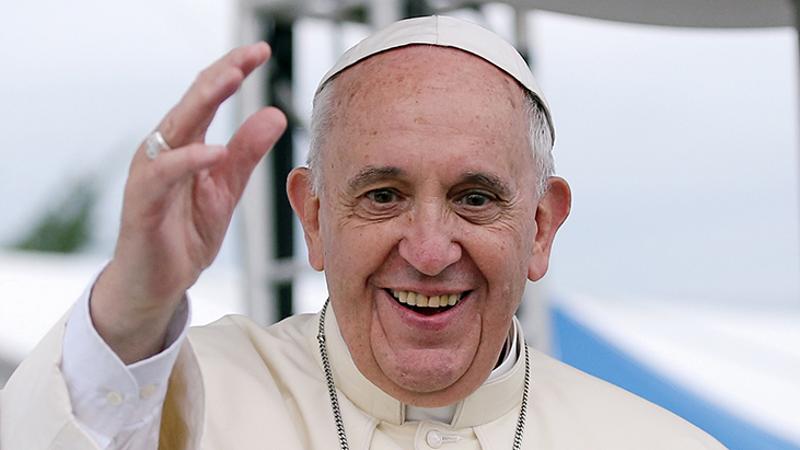 Let us now give thanks: A bold few among the restaurant congregation have cleared the way for places of all stripes to play off Pope Francis’ U.S. visit without fear of being hit with a lightning bolt. Or even a backlash from Catholics.

Once the boundaries of tongue-in-cheek menu making have been stretched to include “hoagie communion”—the presentation of a fresh-baked cookie with a hoagie at D.C.’s Taylor Gourmet, which also offers pre-order confession—it’s hard to imagine going too far.  So grab a glass of Double Barrel Jesus, a featured beer this week at D.C.’s Brookline Pint restaurant, and let’s look at how some places are trying to capitalize on the sensation of the moment.

Argentina in the spotlight

The pope’s South American roots have inspired a number of new dishes sporting the specialties of the Pontiff’s homeland. A special this week at D.C.’s GCDC is the Pontiff, a sandwich made with rib eye, a nod to Argentina’s beef fixation, garnished with chimichurri, the nation’s equivalent of ketchup. Malbec, Argentina’s signature wine, figures large in a number of other limited-time menus.

The pope is noted by most Catholics for his work with wine, specifically the unnamed vintage he uses to celebrate the Mass. But he could refresh during this week’s grueling pontification schedule with any number of libations created in his honor. The Potbelly Sandwich branch closest to one of the pope’s D.C. stops is offering a Papal Shake. Three units in Philadelphia will jump on the bandwagon with a vanilla-ice-cream-and-shortbread blend chosen as the official Philly papal shake by a Vatican representative and students at a local grammar school.

If Pope Francis wanted something a little stronger, he’d probably be treated to the cocktail added this week to the drink menu of Washington’s famed Hay-Adams Hotel. The Holy Grail features Benedictine brandy, olive oil, lemon juice and gin.

If he preferred a beer, he could try The Philadelphia Brewing Co.’s limited-edition Belgian ale called Holy Wooder, which is how someone with a Philadelphia accent would say holy water.

Pope in the pizza

The colors of the Vatican flag are duplicated in the Pope Pizza showcased this week at Ella’s Woodfired Pizza in D.C.  The white of the banner is replicated in ricotta cheese, and the gold is presented in the form of yellow tomatoes.

Paulie Gee, a popular pizzeria in Brooklyn, is selling the Papa Frankie, a white pie sporting a cross made with halved red and yellow grape tomatoes.

One place that won’t be selling a papal pie is Mario’s in Harrison, N.J. Proprietor Anthony Marino refused to use a special pizza box that’s being peddled in the area for Francis’ visit. It features a drawing of the pope on the cover, waving to the buyer.

Marino told the media that he found it sacrilegious.