Over the past decade, the television industry has undergone a dramatic transformation. With the proliferation of highly targeted cable channels, the rise in popularity of DVRs and the advent of streaming Internet services such as Netflix, television viewers are now accustomed to watching exactly what they want at the time that’s most convenient for them. In much the same way, restaurant entertainment systems are pushing beyond preprogrammed background music and karaoke. Today, new technology and apps allow diners to personalize their own entertainment experience. 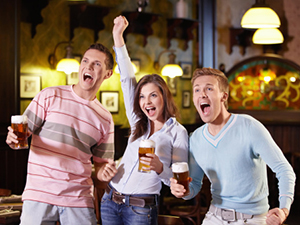 In the 1950s and ‘60s, coin-operated jukeboxes were in just about every café and diner. The modern equivalent of the jukebox, the digital music system, has been around for several years now but the system control has always been in the hands of the restaurant manager or DJ. A few restaurants, like Atlanta’s Do at the View, actually provide customers with iPads that are connected to the restaurant’s music system to let them play DJ.

While that may be a bit too high tech (not to mention expensive) for most operations, smartphone apps are now putting customers in control of the playlist. Several digital music systems, including Touchtunes and Rockbot, have free downloadable apps that customers can load onto their smartphone or tablet. The app users pay for their song plays through a “digital wallet” that charges their credit cards and issues play credits that can be redeemed at any restaurant using the system. To satisfy the need to be constantly connected (and to increase promotion for the restaurant), the apps let users share their music choices with friends via Facebook or Twitter. As an additional revenue generator, the Touchtunes music system also has a “photo booth” option that takes digital snapshots of the customer, which can be then emailed or printed out on paper.

Multi-player, competitive trivia or sports games have long been a staple of the neighborhood tavern or casual restaurant. While these games can build excitement among regular customers and help build repeat business, their major downside has been the game controller units: storing them, keeping them charged, protecting them from theft and ensuring they’re operational.  But there’s an app for that, too.

Customers can now download apps for restaurant game systems (such as NTN’s Buzztime) that allow them to compete using their smartphone. Not only is the controller headache eliminated but more players can be involved in the game, since it’s no longer limited by the number of operating controllers the restaurant has. More importantly, for marketing purposes, once the players are registered in the app system, they can receive targeted promotional messages, “thank you for playing with us” notes or special coupon offers from the bar or restaurant.

The situation is familiar: in a large sports bar with lots of TVs going, the Green Bay Packers are surrounded by “The Real Housewives of Atlanta” and CNN’s latest Mideast updates. And all the TVs are either blasting away or on mute, with the closed captioning activated.  But new wireless technology is changing that scenario, with tabletop receiver/speaker systems like the Soundog. Audio inputs from TVs are connected into a main transmitter, which sends the audio signal wirelessly to the tabletop boxes. Customers can select their choice from multiple (usually up to eight) TV channels, and can hear the sound either through the box’s internal speaker or through their own headphones. As with any wireless pager or game unit, the speaker boxes need constant charging to ensure operation. And here, too, apps are making inroads. At this year’s NRA Show, a prototype system was demonstrated centering around an app that enables customers to listen to the restaurant’s TV programming over their mobile devices. Currently in beta testing, the system should be available to operators in the near future.