New research out last week found that the number of American kids eating fast food declined between 2003 and 2010. Over a decade ago, some 39 percent of kids ate fast food on a given day. Seven years later, the number was less than 33 percent. 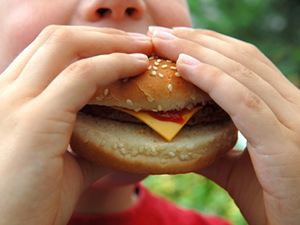 According to coauthor Colin Rehm of Tufts University, whether due to consumers’ shifting preferences or restaurants’ efforts, the report shows that “changes can be made.”

Rehm cited nutritional awareness and restaurant menu and portion adjustments as contributing to the findings, which also point to a decline in the calories fast food contribute to diets, the New York Daily News reports. Another researcher notes that with adult fast-food consumption declining, it’s not surprising to see similar shifts in children.

If the trend continues, another recent force in the restaurant industry may be lending a hand. During a recent press trip, I asked a well-known Chicago chef about his future projects. After opening some of the city’s most successful restaurants recently and branching out into the suburbs and smaller cities out-of-state, where would he find his next challenge? His answer: fast food.

He’s hardly alone, and we’ve written about it several times. Now instead of “farm-to-table” tumbling off chefs’ tongues every time they describe upcoming ventures, the term we’re hearing more often than not is “fast food.” California chefs Roy Choi and Daniel Patterson are doing it with Loco’l. Jose Andres is doing it with Beefsteak. And there are a number of others.

What’s most striking to this word-watcher is that these chefs are not afraid to use the term “fast food”—a phrase long stigmatized by the culinary elite for its inextricable link to QSRs and a perception of french fries, high fat and low nutritional value.

And here, I think, is where consumers may be leading the way. Busy, working parents aren’t getting any less busy. But they are getting comfortable with seeking out “fast-food” options beyond the drive-thrus at QSRs. Fast casuals are an obvious game changer, but with takeout and delivery becoming a greater emphasis—and sales driver—at full service restaurants, such as Bob Evans and Olive Garden and others, busy consumers, and especially busy parents, it seems, are willing to trade a few seconds saved at the drive-thru window for a few calories saved at the carryout counter.

Third-party delivery services, walk-up takeout windows, QSRs’ own healthier plays and other trends of the past few years will only contribute to the trend. And as researchers said about the direction of the results of the study mentioned above, whatever the drivers, the destination—potentially healthier kids—is encouraging.