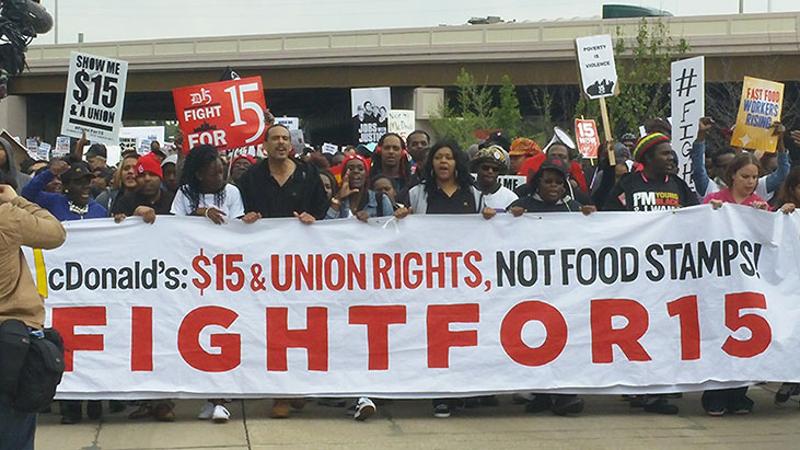 Quick-service restaurant employees will walk off their jobs and demonstrate in 270 cities for a minimum wage of $15 an hour and union representation, organizers say.

They have advised the media that protests about current wage rates and working conditions for hourly workers could spread to an additional 230 locations.

The job action, coordinated by the union-backed Fight for $15 movement, is being described as the most widespread to date. It is timed in part to coincide with tonight’s debate among the candidates for the Republican Party’s presidential nomination.

"There is no question we should be looking at solutions to address the growing economic divide in America,” said Robert Cresanti, CEO of the International Franchise Association, a group that represents franchisees and franchisors in all industries. “However, staging street theatre and shutting down restaurants owned by local families who have invested their life savings and created jobs in communities cannot be the answer."

Here is a list provided by the IFA of where quick-service restaurants are likely to be subjected to job actions and protests. The group represents the interests of franchisees and franchisors across all industries.

A list is also streaming in a news-ticker format on the website of Fight for $15, which gets some of its support from the Service Employees International Union.

Past Fight for $15 job actions have not been as prevalent or involved as many fast-food workers as the organizers had predicted. However, some restaurant employers have reported business disruptions either from employees leaving their posts or outside demonstrations keeping away customers.

Since Fight for $15 began protesting and organizing strikes about two years ago, regulations mandating a minimum wage for restaurant workers (and usually all hourly employees) of $15 an hour have been adopted in Seattle, Los Angeles and New York state, among other jurisdictions.

Berkeley is holding hearings this week on the possibility of raising its pay floor to $19 an hour.

In the action planned for today, Fight for $15 is taking a more political tack. It is urging participants to show their collective political might to prospective candidates by signing a petition themed, “Come get my vote.”

The group’s slogan for today’s action is, “Fight. Strike. Vote.”