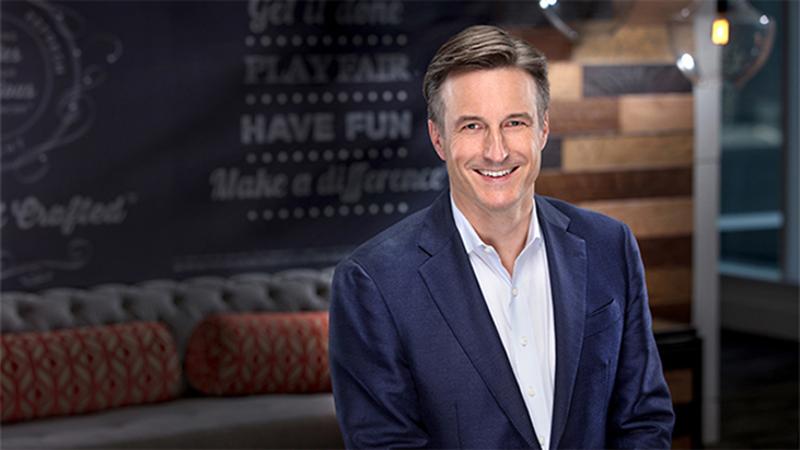 “He’s a visionary with a great sense of adventure,” said a team member of the Arby’s CEO in a video played from the stage.

“He’s sort of like the coach who gets more satisfaction out of the team efforts,” said another. His executive team continued on that he’s accessible, he’s a rare mix of challenging yet supportive, and he’s got a command over virtually every aspect of the business.

Yet it’s this team, not himself, that Brown credits for the successful turnaround of Arby’s that’s happened since he took the helm in 2013. Even in accepting his award, Brown suggested his leadership team, franchisees, suppliers and others are actually responsible for the successful path Arby’s has been on.

Brown, in his first role in the restaurant industry, led the turnaround of a struggling, nearly 50-year-old brand, with Arby’s now outpacing much of the rest of the LSR market. Same-store sales for Q3 2016 rose 2.4%, compared to the 1.4% rise in comps of Wendy’s (which still owns about 18.5% of Arby’s) and 1.3% comps for the overall LSR market. That marked the sixth straight year of positive same-store sales for the concept buzzed about for its “We have the meats” campaign and out-of-the-box LTOs like its recent venison sandwich.

While he credits his team, part of those rising numbers can be attributed to Brown’s leadership style—a style he says started with what didn’t work for him in his previous career. “I used to talk too much,” he told RLC attendees. “The more I talked, the less other people talked, and I kind of took the oxygen out of the room.” Now, he says, he makes sure to have a diverse group of leaders around him and to create an environment where people feel comfortable sharing their ideas.

And that meant doing a lot of listening to kick off the turnaround, finding out what worked for Arby’s in the past and returning to the brand’s roots. His findings: Every time Arby’s pivoted too far toward quick service or fast casual, it was not successful. “That came from learning about the history of the brand.”