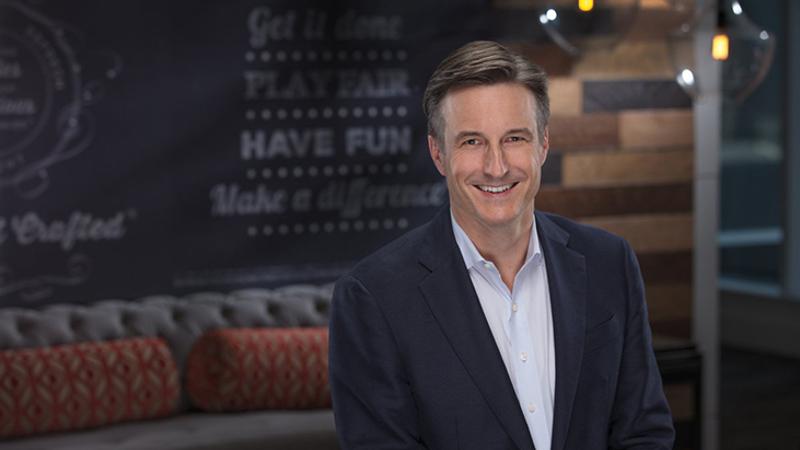 Paul Brown, CEO of the Arby’s sandwich chain and the force behind its dramatic though still ongoing turnaround, has been selected by the editors of Restaurant Business as the 2017 Restaurant Leader of the Year.

The award recognizes the chain executive or multiconcept operator who has done the most outstanding job of stewarding his or her charge to greater success and opportunities.

In Brown’s instance, Arby’s was a troubled brand when he took the helm in 2013. The concept had passed through several changes in ownership, management and direction. Relations with franchisees were strained, the system seemed adrift, and the dollars weren’t there to upgrade menus, freshen stores and otherwise adjust to the times. The 45-year-old chain was showing its age, especially when compared to the smart-looking fast-casual sandwich joints that were pouring into the market. Arby’s seemed as old hat as the Mountie headgear in its logo.

Brown, who had come to the chain from outside the industry, brought a focus and determination that impressed subordinates and convinced high-caliber recruits to take a chance on what many dismissed as a lost cause. The key, they and franchisees attest, was the former computer programmer’s ability to soak up information from people who knew the system’s promise and remembered the brand’s heyday.

He baked that input into a turnaround plan that was articulated throughout the system. He showed franchisees and his management team that this would be a collaborative effort, with ideas welcomed from any party. Indeed, the new watchword would be innovation, though without forsaking the brand’s roots as a roast beef chain with a quirky menu.

The results give Brown and his team the undisputed bragging rights to one of the most dramatic restaurant turnarounds in decades. He’s quick to point out that the work isn’t done yet, and might never be completed. But even doubters acknowledge that Arby’s is no longer an antiquity sliding into obsolescence.

“I want to thank the editors and staff of Restaurant Business for their strong vote of confidence in our brand,” said Brown. “Across our global operations, [Arby's] and franchisee team members are inspired to help Arby’s continue to grow. While this recognition is a tremendous affirmation of just how far we’ve come, we’re really just getting started.”

A full account of Brown’s story is available here.

Past winners of the Restaurant Leader of the Year Award have included Greg Flynn, founder and CEO of Flynn Restaurant Group, the industry’s largest franchisee; and Danny Meyer, the creator of Shake Shack and CEO of the standard-setting fine-dining group, Union Square Hospitality Group.

The award will be presented during the Restaurant Leadership Conference next month in Scottsdale, Ariz. He’ll also discuss on stage how he arrived at his strategy, and answer questions from the audience of C-level chain executives.