To build buzz around traditional winter drinks such as hot chocolate and cider, operators are borrowing tactics from the coffee wars, touting handcrafted techniques and seasonal flavors more often associated with lattes and mochas. It’s big business: 66 percent of midscale restaurants offer hot chocolate, as do 23 percent of fast casuals and 20 percent of QSRs, according to Chicago research firm Technomic. 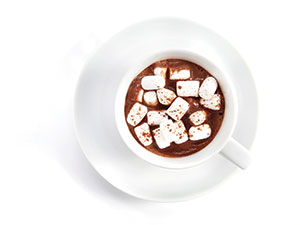 When it comes to seasonal LTOs, caramel may be to sweeter drinks what pumpkin spice is to coffee beverages. In the third quarter of 2014, Big Boy Restaurants International added Caramel Spice to its beverage menu, featuring hot chocolate topped with caramel sauce, whipped cream and cinnamon sugar ($1.99). Earlier in the year, Dunkin’ Donuts added Salted Caramel Hot Chocolate ($1.99). Caramel is showing up in hot apple cider as well—demonstrated on the menu boards at chains such as Starbucks and Caribou Coffee.

Unique flavors and preparations set the hot-beverage menu apart at 107-unit Cosi. In addition to hot white chocolate and chai and caramel hot-cider flavors, Cosi promotes its Steamers as a differentiator on the hot- beverage menu. Similar to lattes, the steamers are noncoffee drinks made of milk steamed and foamed on the cappuccino machine and sweetened with honey-vanilla syrup or chocolate sauce and raspberry syrup.
Cosi’s steamers were developed as an alternative to coffee and tea for families with children who don’t want the caffeine, says Joyce Lee, vice president of marketing for the Boston-based sandwich chain. As such, Cosi finds that the Steamers sell better in the suburbs. And the price—$3.19 for a small and $3.49 for a large—is above the average $2.96 price of hot chocolate in the Northeast (according to Technomic), increasing profit potential.

A warm dose of authenticity

“Bean-to-cup chocolate” is the tagline for the five hot-chocolate drinks on offer at Xoco in Chicago. To play up the quality and craftsmanship of the drinks and to entice passersby, whole cacao beans are roasted and ground in front of the window. About half of the guests who walk into the two locations of the Rick Bayless-owned fast casual (which feature Mexican street food and snacks) order hot chocolate, says Arthur Mullen, manager of the North Clark Street location.
Xoco also uses authenticity as a hook to sell its hot chocolate, which ranges in price from $2.75 to $3.25 per cup and has a 27 percent food cost. Champurrado, the flavor most associated with hot chocolate in Mexico, is the top-seller; it’s thickened with masa, “giving it a velvety texture, almost like a hot milkshake,” Mullen says. And customization—a cornerstone of premium coffee offerings—also is promoted here. “Almond-milk hot chocolate is popular … because it’s great for vegans or those looking for dairy-free options,” says Mullen. It’s one of three vegan choices on Xoco’s hot-chocolate menu; the other two are made with water.