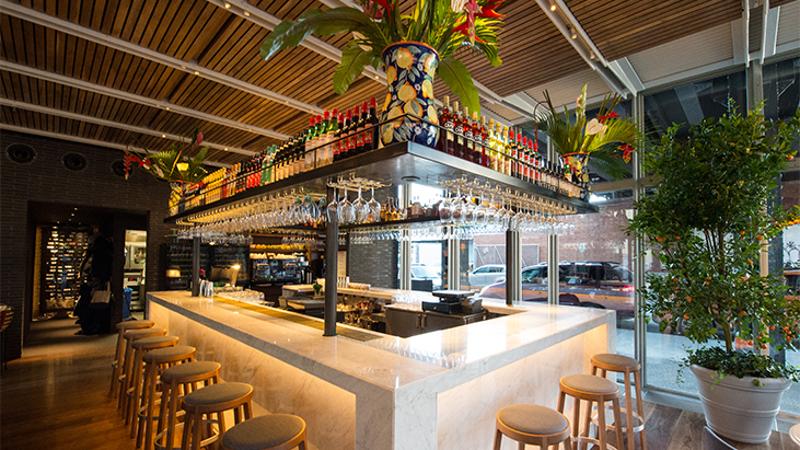 With the growing popularity of brunch, operators are turning to the bar—not just for dining room overflow or selling bloody marys, but as a focal point. Because whether diners are feeling social or hungover, drawn to the personalities behind the bar or the theater of drink making, they want to belly up at brunch.

Homegrown and handmade are core values of Asheville, N.C.-based Tupelo Honey Cafe, so bartenders are encouraged to share about the craft beers they’re drinking, the local rum distiller who stopped in or how the lavender simple syrup for the popular lavender honeysuckle flip cocktail was made, including at brunch.  All bartenders receive server training in order to know the brand’s food and service model and understand the brunchtime guest experience.

In Chicago, Bohemian House has no trouble filling barstools with everyone from millennials to tourists. BoHo offers a range of sessionable cocktails and nonalcoholic drinks, staffing up to two bartenders (compared to three during dinner). But the concept looked to offer a differentiator beyond the regular weekend brunch.

Last summer, it launched a brunch-only live acoustic music series in the bar and lounge on the first Saturday of each month. Exclusive to the event, a seasonally rotating, build-your-own cocktail station on the bar features mimosas in summer and hot chocolate and coffee drinks in winter. The DIY cocktails helps drive traffic, says owner Dan Powell. “It gives Bohemian House something to talk about, promote via press and fresh social media content,” he says. “Through proactive efforts, it helps generate additional awareness for brunch service and contributes to driving traffic.”

In brunch-loving New York City’s touristy Meatpacking District, the bar at Italian concept Santina accommodates spillover and those waiting to be seated. “But a lot of folks opt to stay at the bar once they start there,” says GM Timothy Meyers. The offering of large-format Bellinis, spritzes and bloody marys helps push the daytime food and drink revenues to 50:50, compared to the normal 60:40 food and drink split during daytime. The large-format cocktails—which are listed specifically on the brunch menu but available at any time—were developed based on a guest request for something easily shared by a group. “This also gave us the opportunity to serve guests more quickly. We have found that brunch crowds drink more and quickly, so it was a win-win for all,” says Meyers.

Daytime bar culture isn’t nearly as ubiquitous in St. Louis. Two-year-old Reeds American Table, which launched brunch last June, is one of few spots around offering bottomless mimosas, and General Manager Nicki Ball has to push diners to sit at the bar.

“Because we have a bartender, I push every two-top that walks in to sit at the bar,” she says. “They’re usually surprised that they can have full service there. Once they’ve sat there that first time, they usually ask after that.” The restaurant also leverages its personnel—award-winning barista  and Coffee Program Director Zach Althaus is the main brunchtime bartender.

Having a bartender whom diners are willing to wait for bar seats to hang out with is essential not just for upselling, but for establishing regulars as Ball looks to grow the daytime cocktail program. “He’s part of the draw, and that’s extremely important for us,” she says.

After trying off-premise, some restaurants instead opt to close

Not even Domino’s can escape the coronavirus impact