Juicing is powering up menus. The recession put a squeeze on sales of made-to-order juices, according to the 2014 Juice & Smoothie Bars in the U.S. report by Los Angeles market researcher IBISWorld. But increased consumer demand for healthy beverages and an expansion of juicing into concepts other than smoothie and juice bars are revitalizing the category, the report says. 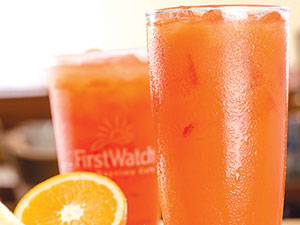 First  Watch, a Brandenton, Fla.-based franchisor of 130 restaurants serving breakfast and lunch, already offered fresh-squeezed orange juice when it added Day Glow (a blend of carrots, oranges, lemons and a hint of ginger juice) as part of its new Jump Start menu in January. It was a big commitment, requiring a substantial investment in equipment—heavy-duty commercial juice extractors were installed at each location. But so far, it’s been worth it, says Corporate Chef Shane Schaibly. At $3.99 for 10 ounces, Day Glow is the most expensive drink on the menu and also the most profitable—even more so than coffee—and shows no signs of cannibalizing other beverages or snack/side items, Schaibly says. “We wanted it to be an add-on, and it is,” he says.

First Watch kind of fell into a more healthy positioning because of its emphasis on breakfast, Schaibly adds. “We noticed the popularity of juicing growing over the last few years and saw it as an opportunity to broaden our beverage offerings and introduce guests to another, healthier option,” he says. With an average of 12 to 20 orders a day, Day Glow has been so successful for First Watch that it is the first entry in what will eventually become a separate juicing menu. Next up: Kale Tonic, a green-juice blend of kale, Fuji apple, English cucumber and lemon that will debut in spring.

While First Watch is easing into juicing, the trend is fueling the growth of Irvine, Calif.-based Juice It Up! The 82-unit concept transitioned post-recession from a smoothie bar to a chain specializing in raw juices, acai bowls and other functional products that appeal to consumers at different levels of health-consciousness.

Juice It Up! already was attracting customers who juice at home, but the challenge was to build traffic with a broader menu, says Carol DeNembo, vice president of marketing. In addition to seven extracted juices, new in 2014 were two fruit-and-vegetable fusions. These are made in a blender rather than a juicer, a technique that retains the fiber. (With juice extractors, the fiber is separated and usually discarded.)

The first blended juice was the well-received Raw Fusion (kale, spinach, pineapple, apple and banana); sales were 30.4 percent higher during its run compared to a smoothie LTO with similar ingredients. It was quickly followed by the Red Fusion (beets, pineapple, red grapes, strawberries, cucumber and banana). A large juice tops out at $9.75 at Juice It Up!, but fresh produce can be expensive. “The key is working with vendors and farmers to stay ahead of seasonal price and quality fluctuations,” says DeNembo. For price stability, the chain will switch out Apple A for Apple B, for example.

In the meantime, LTOs and new introductions accompanied by email blasts and promotional coupons continue apace for Juice It Up! “I think we will be seeing a lot of juice bars and juicing concepts popping up now,” says DeNembo, “but we’ve already got a history.”