Just as certain restaurants are paring down their food menus, a number  are shrinking their wine lists—for many of the same reasons. Fewer SKUs ease operations by simplifying inventory control and purchasing. And when a list is driven by customer preferences, there’s more fluidity, allowing an operator to adjust selections to reflect changing guest demands. 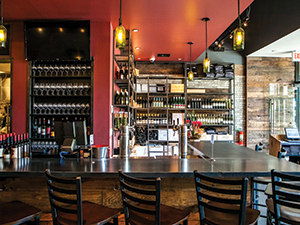 According to Winemetrics, a Fairfield, Conn.-based market-research company, leading casual-dining chains reduced their wine selections by 6 to 28 percent in 2014. Those “editors” included Olive Garden, Outback Steakhouse, Red Lobster and The Cheesecake Factory, says Charles Gill, CEO of Winemetrics. Gill believes the reason for the slim-down is that chains are focusing on more popular and profitable craft beer and cocktail offerings—drinks that millennial-age servers and customers better understand.

Not everyone is convinced that cutting wine offerings is a good idea, though. For its part, Hard Rock Cafe has increased the number of wines on its list from 18 bottles up to 24—still a manageable number for a chain. “We wanted to focus on some higher-end wines that are available only by the bottle,” says Cindy Busi, worldwide director of beverage for Orlando, Fla.-based Hard Rock International. The 48 U.S. restaurants were attracting more travelers, especially from abroad, and they were willing to spend more on wine, Busi says.

In addition to the higher-end wines,   Hard Rock added prosecco. “Sparkling wines continue to grow [in popularity],” Busi says. Technomic has the data to back up that claim. The Chicago research company reports that Champagne and sparkling wines were on an upward trajectory in 2013 and 2014. More than a quarter (27 percent) of customers ordered sparklers at least once a month, with 21- to 34-year-olds the biggest fans, coming in at 43 percent.

Shifting tastes to cocktails and craft beer mean that operators have to work harder to sell wine than in the past. That’s why Lasco restaurants put a strong focus on waitstaff education and training. One strategy that sells more wine: Don’t limit customers to the by-the-glass list. Max’s Wine Dive will open any bottle if guests order two or more glasses of the wine. That includes pricey Napa cabs and Bordeaux, which is why glass prices range from $5 to $687, although the sweet spot is $8 to $12, says Baumunk.

At Hard Rock, bottle and glass prices vary depending on location, says Busi. Bottles range from $27 to $115; six-ounce glasses, $7 to $13. But offering wine by the half-carafe (12 ounces) at a slightly higher price has yielded Hard Rock more sales. And customers feel they are getting a bargain. “We find our guests like this option [of the carafe] because they get half a glass free,” Busi says.