Restaurants may get a lot of buzz for their craft cocktails and wine lists, but 42% of Americans who drink alcohol say they prefer beer, a recent Gallup poll reports. Wine was the second most preferred adult beverage, garnering 34%, with spirits coming in third at 19%.

Research from Technomic supports the idea that beer remains a popular consumer choice. Sixty-six percent of consumers who drink adult beverages in bars and restaurants report ordering beer in the last 30 days, according to the most recent On-Premise Intelligence Report. (That number rises to 69% among imbibers age 21-34.)

Although Big Grove wants to attract younger beer fans, its two brewpub locations in Iowa City and Solon, Iowa, serve a diverse clientele. Technomic research shows that older consumers still prefer domestic lagers, while those in their twenties and thirties are more apt to choose craft beers—a choice in sync with their more adventurous tastes. “Millennials and Gen Z entered legal drinking age with a different palate than previous generations,” says Donna Hood Crecca, principal with Technomic. “They’re more in tune with rich, complex and even savory flavor profiles … and are eager to learn the back story of a beverage.” 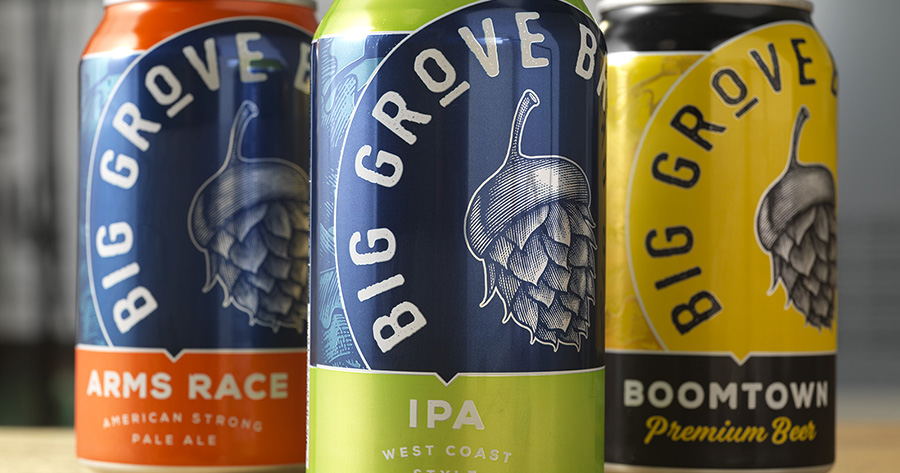 Big Grove, which brews 60 beers a year on-premise, addresses that divide. “We’re enticed to do more aggressive stouts and IPAs and be edgy with that younger customer, but we also brew beers reminiscent of what’s in your grandpa’s fridge,” says Swift. “The truth is that many people are intimidated by craft. … Eighty-five percent of the market is still lighter domestic beer.”

But Big Grove is also focused on telling the back story. “It’s a unique experience to know where your beer is coming from, especially when it’s made 20 feet from where you’re sitting,” says Swift.  “Customers are looking for a beer experience.”

Hyperlocal beer—the next iteration of sourcing from a local beer company—is a selling point, but it’s not the only way Big Grove Brewery is differentiating itself. “We always have six core beers on tap, then change up the roster often with seasonal beers and ‘passion project’ brews,” says Swift. “Customers eagerly wait for certain ones to come out.”

While the smaller Solon location is a full-service brewpub, the 1,200-seat Iowa City taproom has a counter-service model, says Swift. Guests walk up to the bar to order food, and a buzzer alerts them when it’s ready. The menu focuses on street food, shareables and sandwiches. While they wait, customers can sample as many beers as they want before making their drink decision. Once seated, servers come around to take refill orders. The sampling is a worthwhile marketing investment, says Swift, as it acquaints guests with Big Grove’s beers and diminishes that intimidation factor.

Hopdoddy Burger Bar also transcends the fast-casual experience with its beer marketing strategy. Although its sampling program isn’t as extensive, the 22-unit burger bar invites trial with its Brewery of the Month drafts program. Craft beers from a different brewery rotate in each month, priced at $5 during happy hour (3:00-6:30 p.m. Monday through Friday) and featured in limited-time menu items as part of Hopdoddy’s Brew Series. To further draw attention, the series promotes a burger that uses one of the beers as an ingredient. A recent LTO was a Carolina Gold Burger in which the barbecue sauce was infused with the French-style saison beer featured that month. Customers can pair the burger with a specially-priced pint of the beer.

Both Hopdoddy and Big Grove differentiate their beer programs with an extra shot of hospitality. “The best way to sell beer is to make people feel welcome,” says Goettsch.