Beer, wine and even cocktails have been a point of differentiation for fast casuals, but as far as consumers are concerned, there’s still room to grow. Nearly one quarter (24 percent) of consumers say they want to see more adult beverages at fast casuals, a survey from Chicago researcher Technomic finds. The challenge is presenting a robust program that will turn this opportunity into a profitable revenue stream—all without a bar. 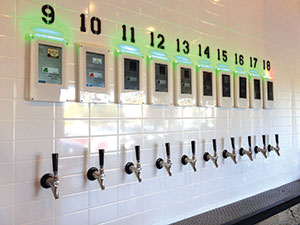 Yet, more doesn’t always mean more. To accommodate consumers’ craving for more choice and to continue siphoning market share from casual restaurants, fast casuals are getting creative. The Sacramento, Calif., outpost of zpizza offers 18 different beers. But instead of pulling a bottle from a behind-the-line cooler and handing it to the guest, customers are handed an electronic bracelet, allowing them to pour their own drafts from a self-serve beer wall.

“We wanted to establish a more personalized, tech-savvy and modern dining experience, all the while tapping into the local craft-beer culture,” says Chris Bright, CEO of the 108-unit pizza chain headquartered in Newport Beach, Calif. The chain, which earns the majority of its sales from takeout and delivery, also wanted to drive more dine-in business. The answer: a new Tap Room prototype that launched this September.

The new design features a dining room as well as a separate keg room, the centerpiece of which is a beer wall that sits at the side of the room, just as a self-serve soda dispenser would. Tap Room customers receive an RFID-enabled wristband that tracks the amount of beer poured (staff checks I.Ds. before handing over the band). The wristband is linked to a credit card, so customers run an open tab that is charged as they scan it at the tap before each self pour.

Guests also can educate themselves on the beers. Display tablets mounted above the taps provide information such as the source and tasting notes on each brew in addition to the price per ounce. A “learn to pour” icon reveals more tips. zpizza also keeps a staffer available in the keg-room area to answer questions and help with pours, if needed.

This self-serve model has potential to be more profitable than a traditional bar setup. For example, while zpizza encourages guests to try samples of beers, those samples aren’t free. Customers pay for every ounce, so there’s no loss for the chain. And that per-ounce charge doesn’t take mispours into account; spillage is still paid for.

Additionally, since guests don’t have to wait for a bartender to free up, there’s opportunity to sell more. But that doesn’t mean customers have unlimited access. According to the supplier’s website, the system also can monitor the amount of consumption based on wristband scans and allow an operator to limit self pours after a specific number of ounces or trips to the tap.

An added benefit of this model, said Bright at this year’s FSTec technology conference, is the increased efficiency and reduced “friction” (see Page 88) between guests and servers. “Especially when we deal with the millennials these days, good, bad or indifferent, sometimes they don’t want to talk to someone. They want to go through the process without having to deal with another person that’s involved in the order taking or delivery of the food,” he says.