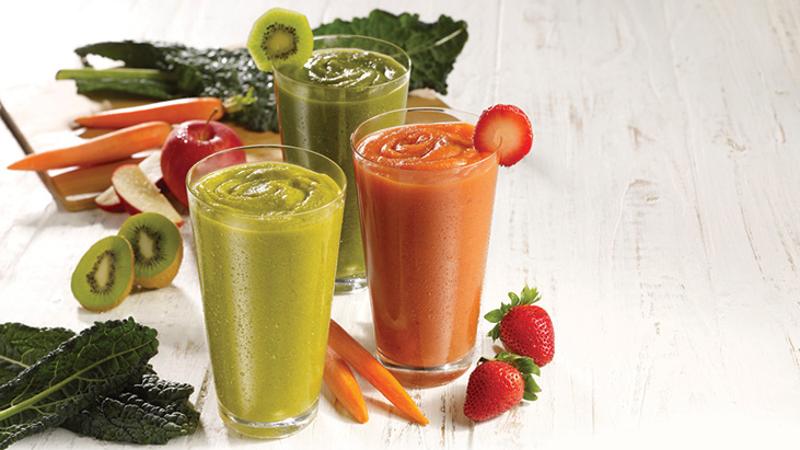 Blending vegetables into traditionally fruit-forward beverages has proven to be a winning sales strategy at juice bars, smoothie chains and health-focused restaurants. For example:

So where can vegetable-based beverages go from here? Big chains searching for the next “it” ingredients may find the answer in smaller, independent juice shops across the country. There, alternative vegetables, spicier fusions and vegan proteins have long been differentiating juices and smoothies and driving sales.

At Harlow in Portland, Ore., the Tempest Smoothie is a blend of mango, spinach, avocado, coconut oil, dates and cayenne. Butcher’s Daughter in New York City offers the Hangover Killer, which includes coconut, pineapple, yuzu, chili and cilantro. And the cold-pressed juice menu at Juice Bar’s three locations in Dallas plays up cayenne, jalapeno and turmeric in its ingredients list.

Tropical Smoothie Café soon may find a place for spicier spins on its own smoothie menu. Encouraging sales of its Avocolada has the 440-unit chain looking for its “younger brother or sister” to put alongside it, Rotondo says. For inspiration, it is turning to a second franchisee recipe contest, planned for February. “We will see what comes out of that and take it from there,” says Rotondo. “Last time, we had submissions that featured tomatoes, sweet potato, all kinds of different peppers, including jalapenos, so we are looking at using spice and ways to bring those different types of vegetables in now, too.”

While yogurt blends always will dominate on smoothie menus, both Tropical Smoothie Café and Smoothie King are finding traction in offering more vegan proteins. “When we introduced the Veggie Blends, we kicked off an avalanche of new vegan products,” says Smoothie King’s LeBlanc. Its vegan offerings use almond milk as well as less mainstream smoothie ingredients, such as raw plant-based protein, super grains and cocoa. Introduced last fall, “they were a runaway hit,” says LeBlanc.

“The product was so successful and the trend [continued to grow], so we launched a line extension six months later [in March 2015] with our Nutty Super Grain smoothie.” Adding almond milk as a SKU has another bonus—it expands smoothie options for dairy-allergic customers.