Like other aspects of the industry, the smoothie segment has been impacted by the economy. With the average non-alcohol beverage hovering at $2.50 during the third quarter of 2010, smoothies are a tougher sell at an average price of $4.14, according to Mintel Menu Insights. Some consumers are sipping soft drinks or juices in lieu of made-to-order smoothies, or forsaking smoothie specialists for less-pricey fast-food versions. Indeed, 35 percent of respondents to a Mintel survey reported they were not drinking made-to-order smoothies because they were too expensive, up from 32 percent in 2009. 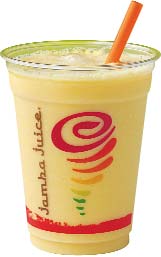 The big news in the category is McDonald’s smoothie debut last summer. Its launch was supported by a TV ad campaign and extensive sampling programs. McCafe 12-ounce smoothies are priced $2.29 to $2.79, and currently come in Wild Berry and Strawberry-Banana. The smoothies extend McDonald’s beverage line, which also includes shakes, McFlurrys, Frappes and specialty coffee drinks.

And not just McDonald’s is moving into smoothies. During last year’s third quarter, there were 68 percent more smoothie items on restaurant menus, according to Mintel’s Made to Order Smoothies and Shakes U.S. Executive Summary. QSRs added the most to menus.

Smoothie specialists have responded with various moves to differentiate their products. Jamba Juice, for example, has a new line of Probiotic Fruit & Yogurt Blends. Made with whole fruit, nonfat yogurt and a proprietary probiotic booster, which contains over 500 million active cultures per serving, the smoothies enhance the body’s immune system and aid digestion, claims the company. Flavors include Vibrant Berry, Strawberry Alive and Thrivin’ Mango.

Despite the finding that 28 percent of respondents were influenced by smoothies’ healthy halo, some consumers voiced doubts. Twenty-two percent in the Mintel survey said they were not drinking smoothies because of a concern about too much sugar, up from 16 percent who felt that way in 2009.

The good news is that a full 42 percent of respondents reported purchasing a made-to-order smoothie from a smoothie shop, restaurant or juice bar in the past three months. Although they are premium priced, many made-to-order smoothies are twice the size of McDonald’s 12-ounce smoothie, and thus may be considered a good value for the money.

Tropical heat
"We had a great year,” declares Mike Rotondo, vice president of operations for the Destin, Florida-based Tropical Smoothie Café. Total 2010 revenues for the 300-plus unit chain increased 15 to 16 percent, estimates the VP, with comp store sales up nearly 10 percent over 2009.

“We didn’t go into a defensive mode [because of the economy], we’ve gotten aggressive,” says Rotondo. He cites new menu products and well-merchandised LTOs as keys to success. The introduction of online ordering in 2010 also helped boost sales, as did a program to help franchisees cultivate catering sales.

Although Tropical Smoothie Café didn’t offer food when it opened in 1997, execs soon decided to develop a fast-casual menu as a point of differentiation. That menu now includes sandwiches, wraps, flatbreads, soups, salads and breakfast.

Last September, a breakfast promotion proved so popular that four of the items have been added to the permanent menu, including the Pesto Paradise sandwich (egg, ham, pesto, tomatoes, mozzarella and parmesan cheeses) and the Kick Start (egg, ham and bacon with Buffalo sauce).

“We saw a significant increase in breakfast traffic,” notes Rotondo.

Also debuting during the breakfast LTO was the Triple Berry Oat Smoothie, a proprietary blend of strawberries, cranberries, blueberries, ground flaxseed and whole-grain oats, wheat, rye and barley. It boasts 20 grams of fiber per serving. The Oat smoothie (served all day) is further spiked with multi-vitamins and added protein.

Tropical Smoothie Café plans to continue its proactive approach in 2011, says Rotondo. A January LTO gave customers a chance to add a free supplement to their favorite smoothie. February promotions include a relaunch of popular papaya in a Caribbean Breeze Papaya Smoothie. The chain boasts 35 smoothie varieties; the 24-ounce drinks range from $3.99 to $4.49.