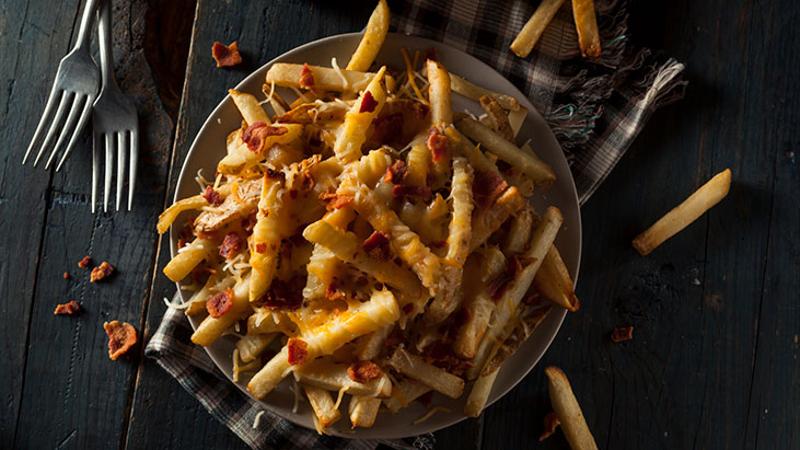 Although consumers’ moves toward better-for-you menu items continues to influence operators today, fried foods remain universally popular choices for restaurantgoers. With 84.5% of all operators listing fried dishes on their menus, frying reigns as the most popular preparation method, according to Technomic’s MenuMonitor, powered by Ignite.

But as these trends in fried foods show, frying and better-for-you items aren’t necessarily mutually exclusive. Take a look at these emerging items making moves on menus today.

Alternative preparation methods and over-the-top plating styles are boosting the appeal of this already popular menu staple. Overall, menu mentions of fries are up a healthy 6% in the past year, according to MenuMonitor, but sweet potato fries have jumped 17.5%, loaded fries are 9.9% more common and poutine mentions have grown by 8.8%.

Breaded and battered fried chicken are restaurant staples, but some creative chefs are forgoing the outer coating—a shortcut that yields crispy skin and a lower-carb, cleaner product. Plenty of vegetables, too, are skinny-dipping along with potatoes in the fryer: Nonbreaded vegetables appeared on menus 12.7% more often in the past year, according to MenuMonitor.

Scotch eggs, classic British pub fare, are finding fans across the pond. The classic recipe involves a runny- to hard-boiled egg wrapped in ground sausage, breaded, then deep-fried. Americanized touches include versions that swap out chorizo, ground hot dogs or ground chicken for the sausage; Scotch deviled eggs; falafel-breaded versions; and a burger with a halved Scotch egg that stands in for a traditional bun.

Restaurants continue to borrow ideas that launched at carnivals and state fairs, creating whimsical and craveable options for consumers. The menu incidence of fried cheese and cheese sticks, for instance, grew 2.3% last year, according to MenuMonitor. These days, fried cheese reflects an ever-expanding global palate that includes not only traditional mozzarella and provolone but also Edam, cheddar, American and other ethnic varieties. Comfort food mainstays such as corn dogs and mac-and-cheese bites, deep-fried cookies and pastries, apple fritters and upscale churros served with signature sauces add a dash of fun to menus, even at upscale eateries.

The growing appetite for world street foods has inspired plenty of appetizer and bar menus, which often rely heavily on the fryer. Many of the latest inspirations have Middle and Far Eastern origins, with items such as Japanese tonkatsu (pork loin or chicken dredged in flour and egg, breaded in panko and deep-fried) and karaage (garlic, ginger and soy-seasoned chicken, floured and deep-fried); Middle Eastern falafel, which can fill a sandwich or be served with dips, Indian pakoras (fritters) and crispy samosas; and Filipino-style lumpia (spring rolls) and deep-fried bananas.