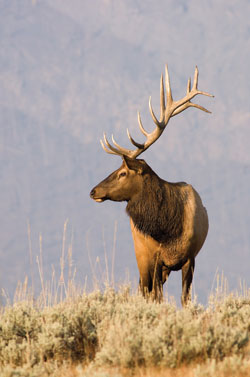 Burger Lounge was looking at other lean, pasture-raised proteins to menu as LTO burgers, and after featuring bison and wild boar at its 11 locations, decided to try elk. “We found a Midwest supplier [Black Wing] that sources humanely-raised, antibiotic- and hormone-free elk from several domestic producers. It has a great flavor—not at all gamy like New Zealand elk—and we know exactly where the animals are raised, which we communicate to our customers,” says Little.

From source to plate

The elk meat is delivered ground, then hand-formed into 6-ounce patties at each location. Burger Lounge works with a local produce company for its vegetables, purchasing organic when possible and cutting them down in-house. The buns—made from wheat flour with a little blackstrap molasses for sweetness—are sourced from a proprietary baker who developed the recipe for the chain when it first started. “We’re fortunate in finding the right vendors that follow the same
high standards as we do,” notes Little.

Since elk meat is a little leaner, it suffers from overcooking. To prevent that, “we use a flattop grill set at 450°F and caramelize the outside to sear in the flavor,” Little explains. Employees are trained in the correct technique through YouTube videos shown on a private channel.

The Elk Burger, which sells for $10.95, is topped with jicama slaw, duck cracklings and chipotle aioli—all made from scratch onsite. “We don’t overthink our accompaniments—we try to keep them simple, but a notch above what you’d expect,” Little points out. The balance of salt, acid and creaminess in the slaw went particularly well with the elk, he adds.

Thumbs down to venison

To expand its “wild” selections, Burger Lounge also tried venison burgers. But the culinary team found the flavor a little too gamy. “We felt the audience would be minimal,” Little reports. “Ground venison is more of an acquired taste.”

The Elk Burger will complete its limited time run at the end of April and a Lamb Burger will follow in May and June. Little is working with a Missouri supplier to source grass-fed lamb. The burger will be served with jalapeño relish, Asadero (a Mexican cheese similar to mozzarella) and tomatillo aioli.