The Restaurant Business team loves to hear about the best dishes industry experts ate and drank throughout the year. After all, it sparks our own internal discussion—and sometimes even some debates—over the dishes we consider tops.

To the chagrin of many, I’m an over-pepperer. I believe that any dish—with the exception of, say, chocolate chip cookies—is better with a generous helping of black pepper. I hit up Swedish-inspired bakery Lost Larson shortly after it opened, and its Cheddar and Kale Scone was perfect in so many ways. Cheesy? Check. Virtuous? Check. (It has kale, after all.) Peppery as heck? Check.
—Kelsey Nash, Senior Editor

Larry McMurtry’s Lonesome Dove is one of my favorite novels.  And chef Tim Love’s Lonesome Dove Western Bistro in Knoxville lives up to its namesake’s greatness. If you’re going to eat at a Western bistro, you want to order something you can imagine, say, Lewis and Clark eating, so I went with the Elk Loin— served with Swiss chard, hen of the woods and candied blackberries.  OK, maybe that’s not how Lewis and Clark would have prepared it, but I cleaned the heck out of that plate.
—Chris Keating, Group President

The signature Smoking Gun cocktail from chocolate shop/all-day cafe Ethereal Confections in Woodstock, Ill. A smoke gun is used to create the head-turning part of the sweet-smoky drink, which is served with a coaster on top to trap in the billowing smoke. Once removed, the swirling vapors create a drink that's at once eye-catching, delicious and supremely Instagrammable.
—Heather Lalley, Editor

I can’t stop thinking about the LT Breakfast Sandwich at Little Toasted. It has it all—sweet notes from the maple bacon, savory notes from the biscuit, and cheese that’s somehow both gooey and crispy. I literally have to stop myself from getting one every morning.
—Kayley Bogdan, Director, Content Marketing 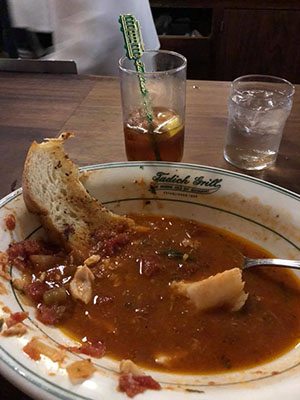 I asked my hotel concierge for a great local seafood restaurant and she steered me to Tadich Grill, the oldest restaurant in San Francisco. I took it as a good sign that myself and my husband had to wait for a seat at the long counter (all of the tables had been reserved, even though it was only lunchtime). The waiter said one of their signature dishes was the seafood cioppino, and since it was a rather cool, blustry day, it didn’t take much convincing for me to order the stew. It was loaded with clams, prawns, scallops, Bay shrimp, Dungeness crab, mussels and whitefish and was served with two pieces of sourdough garlic toast. There was also a bib, which I saw many customers wearing but I opted out of. It was truly a seafood feast—enough to share with my husband, whose eyes had popped out of his head upon the dish’s arrival. I was so caught up in eating it, I didn’t remember to take a picture until after it was nearly gone!
—Kim Collie, Manager, Digital Production 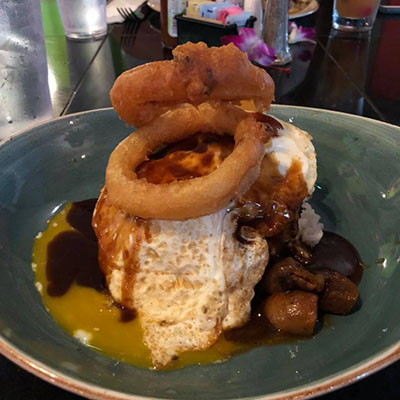 After a long morning of kayaking (5 miles!) our guide recommended a great local spot to grab breakfast. I was starving by the time we got there, so I went for the loco moco—a Hawaiian comfort food. However, this wasn’t your average diner dish. This version featured a thick chargrilled beef patty and two fried eggs served smothered in wild mushroom and Applewood-smoked bacon ragout, served over Japanese sticky rice. The dish was topped with two tempura-style Maui onion rings. I inhaled the entire thing, not leaving a spot of gravy on the plate. I’m not sure it’s dietitian-approved post-workout food, but #treatyoself.
—Kim Collie, Manager, Digital Production 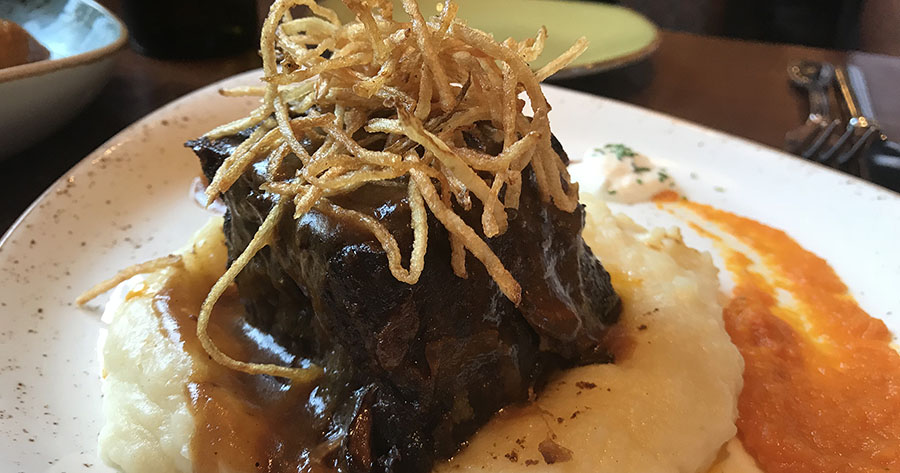 I’ve had a lot of short rib entrees, but the Local Ale-Braised Short Ribs from Fork in Boise really stood out. They were super tender and served with a flavorful mushroom sauce. And, as one would expect in Idaho, they are served with not one, but two savory takes on potatoes, adding great textures to the dish: truffle-cheddar “Idaho smashers” topped with Idaho “potato hay.”
—Sara Wirth, Executive Editor

This unique veggie option has all the best parts of the beloved original Mott Burger: sweet potato frizzles, pickled jalapenos and hoisin aioli, all on a miso-buttered bun. Pair it with fries and a local brew, and their sunny patio quickly became my family’s go-to weekend spot, perfect biking distance from our place.
—Sara Stewart, Senior Art Director

At Le Coq Rico in New York City, I had the most amazing roast chicken of my life. Juicy with crispy skin and super moist meat. And you can choose your heritage breed. I had the Brune Landaise breed, roasted with a seasonal salad and au jus. The servers explain all the different breeds to you in great detail, and this one is very similar to the classic Bresse chicken from France, but is sourced from a Mennonite farm in Pennsylvania. It’s raised for 120 days—a long time compared to commercially raised American chickens—so it develops more tender, flavorful meat. Really yummy!!
—Patricia Cobe, Senior Editor

It was not too sweet or sticky like some lemonades, with a nice beet flavor. I went back for two refills.
—Joe Guszkowski, Assistant Editor 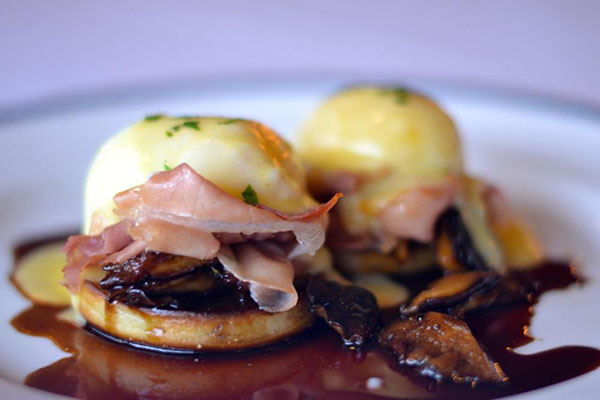 Eggs Hussarde at Brennan’s in New Orleans during the MenuDirections conference was really memorable. It’s a Brennan’s original, with a housemade English muffin, coffee-cured Canadian bacon, hollandaise and Marchand de Vin sauces. Wash it down with a Sparkling Watermelon (local watermelon, lime and sparkling wine) and it’s easily one of the best brunch meals I’ve had in ages.
—Abbey Lewis, Content Director, FoodService Director 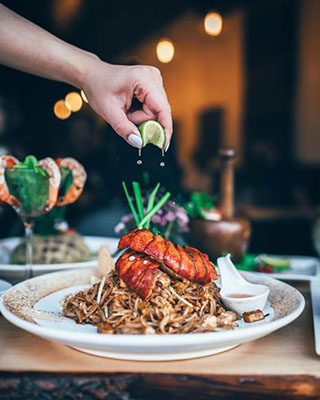 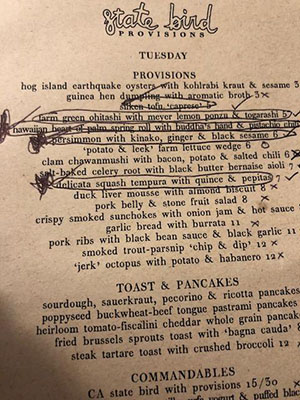 I just had the best meal I've had all year at State Bird Provisions. It’s a cool concept: They just bring small plates around and you grab what you want, or you can order off the menu. My top three are the Hawaiian heart of palm, persimmon and squash. Great flavor, and unlike anything I’ve had before. Great spot.
—Nick Hayman, Chief Customer Officer

It was a flavor explosion and very fresh. I could taste every ingredient! It was unusual to get an arugula salad with a breakfast dish, but very welcome! It also came with crispy hash browns. And this fast casual not only identifies the country where the coffee comes from, but it also includes the farmer who grew the coffee beans.
—Bill Anderson, VP Noncommercial and Publisher, FoodService Director 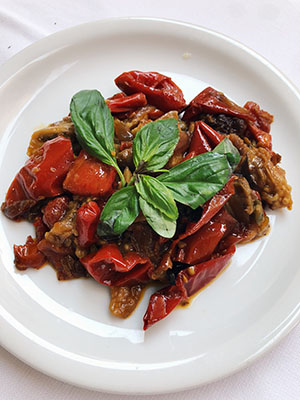 My favorite dish I had this year was the caponata at Il Baccanale in Taormina, Sicily. Caponata is almost like the Sicilian version of ratatouille and contains eggplant, onion, peppers, celery, capers and other vegetables. Each restaurant prepares it a little differently. At Il Baccanale, they oven roast all of the vegetables instead of sauteing them and serve it hot, which gives it a nice, robust flavor that I love. They also provide bread on the side for dipping.
—Benita Gingerella, Assistant Editor