Catering continues to be big business for restaurants; as a group, they capture almost five times the revenue of retailers for off-site events—$19.3 billion annually versus $4.0 billion, reports Technomic’s recent Parties Off Premise study. 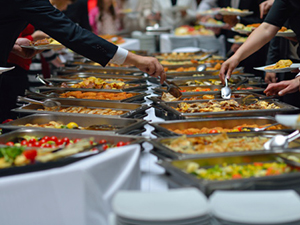 While several market segments are projecting three-year compound annual growth rates (CAGR) tallying 5 percent or better, fast casuals are poised to outperform all other players, with an anticipated growth rate of 12 percent. Quickservice sandwich spots follow, with a CAGR of 8 percent, and club stores have a projected growth rate of 7 percent.

“Improvements in food quality, especially at fast-casual and fast-food chains, appear to be a significant factor in restaurants’ recent gains with catering consumers,” says Melissa Wilson, principal and director of the Parties Off Premise (POP) study. Limited- and full-service restaurants hold the largest shares of this market (36 and 34 percent, respectively) and appear to be taking share from independent caterers and retail foodservice operators, says Wilson.