The Maryville, Tenn.-based casual-dining chain closed at least 10 locations last month as part of a “routine review of our store portfolio,” the company said in a statement. The chain has closed a total of 15 locations in recent months as part of that review, the company said on Tuesday afternoon in a second statement to Restaurant Business. 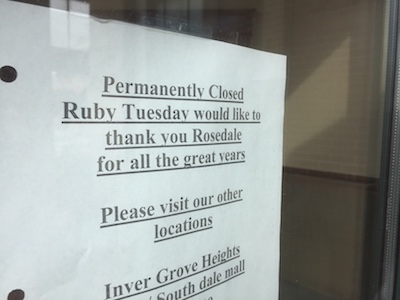 The closures continue the chain’s ongoing decline since its same-store sales began weakening in 2007.

That year, the chain had an all-time high of 945 units. It began closing locations the next year, shuttering 44, and has been in decline ever since.

The company's unit count declined by 17.1% last year, according to Technomic's Top 500 Chain Restaurant Report, to 558 locations from 673—a total of 115 locations.

Ruby Tuesday now has 544 locations, according to the company, meaning the chain has shuttered 400 locations over the past 10 years.

The latest closures suggest that the new owner and management of the bar and grill concept are willing to close additional stores in a bid to turn the company around.

The $1.3 million average unit volume is among the lowest in the casual-dining sector.

In an interview in January, Blanchette hinted that restaurants would have to be profitable to remain open. “All restaurants have to contribute positively to four-wall EBITDA,” he said, referring to earnings before interest, taxes, depreciation and amortization.

Ruby Tuesday isn’t alone. Amid a massive shift in sales toward more convenience- and takeout-oriented fare, casual-dining concepts closed more locations in 2017 than they opened for the first time in modern history, according to Technomic data.

According to local reports, the Ruby Tuesdays that have closed are in Milwaukee, Ohio, Florida and Georgia. Closures have also been confirmed in Minnesota.