As part of its "Marry Bacon" campaign to promote a new bacon cheeseburger, West Coast fast food chain Jack in the Box also introduced a new milkshake flavor: Bacon. It's a limited-time offer—and not listed on the regular menu—but customers who ask may recieve a large shake with 1,081 calories, 37 grams of saturated fat and 108 grams of sugar. That's quite a few more calories than the cheeseburger, with not a single piece of bacon to blame. 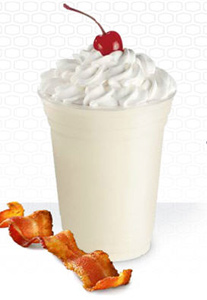 Rather, it uses artificially-flavored bacon syrup mixed with vanilla ice cream. The initial demand was overhelming, and stores began to run out of syrup almost as soon as the offering began. Supplies are described as "limited as limited can be."

We were curious how the Bacon Shake actually tastes. Here are a few reviews from around the web:

"Overall, I wouldn’t call the Jack in the Box Bacon Shake 'scrumptious,' but I also wouldn’t call it 'revolting.' I think 'pleasant' would be the best word I could use to describe it. If you’re REALLY into bacon, you should definitely give it a try. Would I buy another? I probably would. Although, if it came topped with chopped bacon, I’d change my answer to most definitely."
- Marvo, The Impulsive Buy

"The Jack in the Box Bacon Shake tastes terrible, awful, disgusting, wretched, repulsive and vile. I will assume this is a brilliant marketing plan to capitalize on the healthy eating kick, but it tastes so bad it loses power. I wound up throwing mine away, it was that bad."
- Oliver, Lunch Pig

"A heavy, lingering bland with a touch of smoke that doesn't go away. Instead of offering a variation on salt-sweet, which could have been impressive, Jack in the Box's Bacon Shake hits the senses like smokey maple syrup. And not the good kind that, say, one might have found on their Sunday morning breakfast plate as mom's crunchy bacon mixed with Mrs. Butterworth's viscosity. The cold mound we tried to swallow was too sweet and too lifeless to be considered reasonably tasty in a pinch, or even decent hangover food."
- Brock Keeling. SFist

"Perhaps that explains why the shake tastes—not exactly like bacon but more like smoked vanilla ice cream and milk. It's like something from Woodshed Smokehouse gone amiss (or amok?), except that when you leave Woodshed you have a sort of comforting just-hung-around-the-campfire smoky sense about you, while the bacon shake, while not bad, kind of leaves an I-just-ate-the-campfire taste in your mouth. Even my fingers smell a little like smoke, and I think that's just from holding the cup."
- Robert Philpot, DFW.com

And finally, you can watch Nash Harrington from Crave Online drive up and order the shake, and see and hear his actual reactions in this two-minute video.