Bruegger’s Bagels had brought in new equipment at its 290 units to create grilled breakfast sandwiches. But when guests began ordering them for lunch, it was a sign to re-evaluate Bruegger’s cold lunch menu, says Judy Kadylak, VP of marketing. “Our guests showed us that hot sandwiches were the way to go,” she says. After testing two burgers as LTOs in two stores, Bruegger’s now is rolling them out systemwide (along with other grilled lunch sandwiches) over the first quarter of 2015. 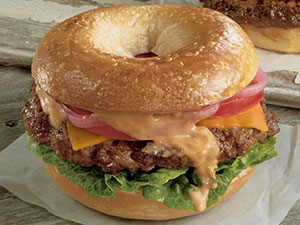 Although not originally in the plans for the U.S., Bruegger’s had tried burgers overseas. “We first introduced bagel burgers at two French locations,” says Kadylak. “Demand was very strong, but we thought it was particular to France.” But the reaction was similar when Bruegger’s menued the burgers in its American test markets. “Trial was immediate, and sales came in four times higher than for any other lunch LTOs,” Kadylak says.

Operationally, zeroing in on timing and temperature was a challenge, Kadylak says. The team first cooked the four-ounce patties in the convection oven for the shortest time at the highest temperature. The goal: to reach a temperature of 160 degrees without drying out the meat. They found that extending the time and lowering the oven temperature produced the juiciest result; burgers are done in under 3 minutes from time of order. The timing also had to coordinate with the toasting of the bagel.

Some people may find biting into a bagel burger to be difficult, so toasting the bagel makes it a little softer, Kadylak says. It also soaks up the patty’s juices better—something, she finds, customers like in a burger. Guests also have the choice of ordering the burger on rye or wheat bread, as a melt.

4. Secret of the sauce

What Bruegger’s calls the Bistro Burger’s “secret sauce” took a bit of trial and error. The R&D team started by combining several products—ketchup, Sriracha and barbecue sauce—already in-house. Dialing down on the barbecue sauce, boosting the Sriracha and adding a little mayo delivered the desired balance of hot, sweet and tangy, says Kadylak. Last, the burger is topped with cheddar cheese and pickled onions.

A taste of breakfast

Bruegger’s other option, the Barnyard Burger ($6.99), is topped with a fried egg, bacon and cheese, cross-utilizing ingredients from the chain’s breakfast menu and appealing to its core customer.