In its first partnership with a restaurant brand, Farmer’s Fridge, the fresh vending company, is testing some of its salads, bowls and breakfast items at select Dunkin’ locations.

The pilot program is taking place at six Dunkin’ stores at which a limited selection of items are on offer behind the counter. Eventually, they will be available in grab-and-go cases rather than the traditional Farmer’s Fridge stand-alone vending fridges.

“Dunkin’ was exploring new food options focused on plant-forward ingredients,” said Meghan Hurley, head of marketing for Farmer’s Fridge. “Our CEO was introduced to the Dunkin’ folks in 2020 and the idea was launched.”

Historically, Farmer’s Fridge has set up its vending operations in airports, college campuses, office buildings, hospitals and similar venues. There are now about 350 installations, but this is the first venture with a QSR.

Dunkin’ is offering two Farmer’s Fridge salads and two bowls, including a harvest salad, Greek salad, pesto pasta and a burrito bowl—the last a combo of black beans, a brown rice-quinoa blend, fire-roasted corn, roasted fajita veggies and guacamole. Also on the menu are chia pudding, apple-cinnamon oats and a yogurt parfait. None of these were developed specifically for Dunkin; these items were already in the fridges, said Hurley.

As in its vending operations, all the food is packed into recyclable plastic jars. Dunkin’ customers can either recycle these at home or bring the jars back to the store where the purchase was made.

“Dunkin’ is committed to delivering a wide variety of delicious, convenient menu choices to help keep our guests running all day long, including options that make it easier to eat on-the-go," said a Dunkin' spokesperson. "We are currently testing Farmer’s Fridge prepackaged salads, grain bowls and breakfast items inside a total of six restaurants in the Chicago and New Jersey markets. The test is designed to gather valuable feedback from consumers, franchisees and their employees to help inform future decisions.”

With many of its fridges in locations that immediately shut down at the start of the pandemic, Farmer’s Fridge had to quickly transform its business model. “We lost 70% to 80% of our business that first week, but by the end of March, we built an e-commerce site on Shopify and launched self-delivery in some markets,” said Hurley. “People still wanted healthy food fast, so we were serving the same occasion as we did at the office.” 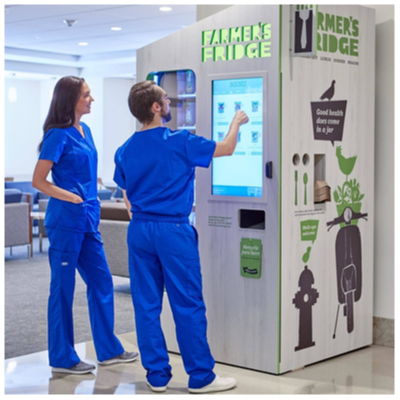 The company also relocated some of its fridges in hospitals and universities to make them more accessible to frontline workers and quarantining students.

Farmer’s Fridge also debuted a Chef Collab series, using well-known restaurant chefs to create recipes for the fridges and home delivery. “When restaurants shut down, we asked the chefs what they would make at home, and they developed dishes for us,” said Hurley.

Almost a year later, Farmer’s Fridge business is back to pre-pandemic levels, said Hurley, but sales are going through different channels. With about half the fridges currently inactive, the company is doing more wholesale, e-commerce and delivery.

In 2021, “we want to take a step back and build out these channels,” said Hurley. “The menu team also wants to focus on product development and develop recipes based on trends and customers’ needs. The Dunkin’ items are just in test right now, but we hope to partner with other restaurants in the future.”